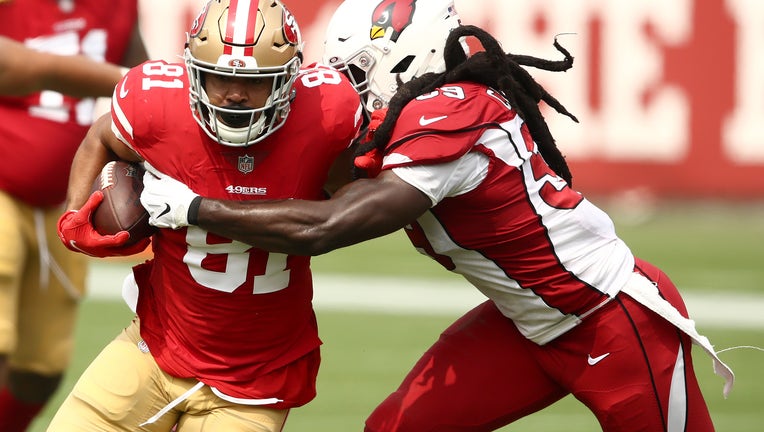 SANTA CLARA, Calif. - DeAndre Hopkins had a career-high 14 catches for 151 yards in his Arizona debut and set up Kenyan Drake’s 1-yard TD run with 5:03 to play that led the Cardinals over the San Francisco 49ers 24-20 on Sunday.

Kyler Murray threw for 230 yards and a touchdown and ran for 90 yards and another score to help the Cardinals (1-0) overcome a pair of fourth-quarter deficits to beat the defending NFC champion 49ers (0-1) in a smoky opener at an empty stadium.

Jerick McKinnon caught a 5-yard TD pass from Jimmy Garoppolo in his first game in more than two years to give San Francisco a 20-17 lead with 8:38 to play before Murray led a late comeback.

His 33-yard pass to Hopkins got the ball down to the 1 and then Drake ran it in on the next play to give Arizona the lead.

Murray had given the Cardinals the lead earlier in the fourth with a 22-yard scramble and his running ability wore down San Francisco’s defense as the game went on.

Garoppolo finished 19 for 33 for 259 yards and two scores, also connecting on a 76-yarder to Raheem Mostert in the first quarter.

There had been concern all week about the status of the game because of poor air conditions from fires across Northern California. The Air Quality Index remained below the 200 threshold and the game was played as scheduled.

The 49ers stood on the goal line as a team during the playing of “Lift Every Voice and Sing.” Running back Jerick McKinnon and receiver Richie James Jr. kneeled during the national anthem. The Cardinals remained in the locker room for both.

The Niners were in control of the game early with a 10-0 lead until Ezekiel Turner broke through and blocked a punt by Mitch Wishnowsky. The Cardinals recovered at the 10 and scored on the next play on a pass from Murray to Chase Edmonds.

Cardinals: S Jalen Thompson left the game with an ankle injury in the first half. ... C Mason Cole left in the second half with a hamstring injury.