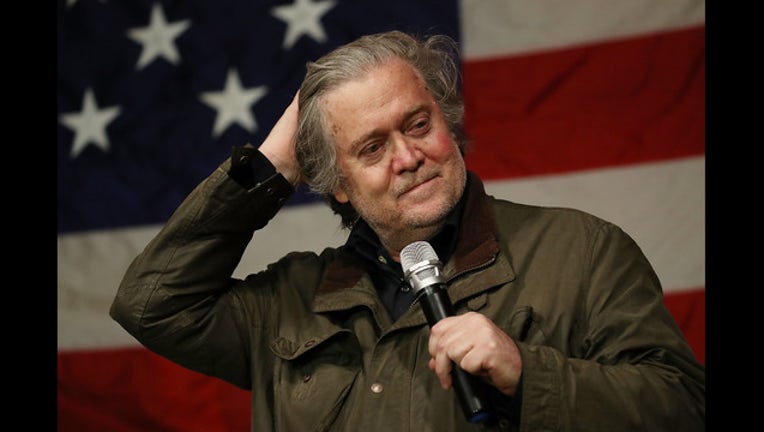 WASHINGTON (AP) -- The Latest on President Donald Trump and the probe into contacts between his campaign and Russia (all times local):

Steve Bannon, former chief strategist to President Donald Trump, is scheduled to be interviewed behind closed doors Tuesday by a House panel, but it's unclear whether he'll show up.

Rep. Mike Conaway of Texas, a Republican, says Bannon is under active subpoena to appear for the interview as part of the House intelligence committee's investigation into Russian election interference and any ties to the president's campaign.

Bannon was expected to appear last week but that interview was postponed. Bannon's lawyer has been negotiating with the committee and the White House about the terms of his interview. At issue is whether the White House will allow Bannon to answer questions about his time in the Trump administration.

The House intelligence committee has voted to release a Democratic rebuttal to a GOP memo on the Russia investigation.

The panel vote was unanimous to make the classified Democratic document public. It now goes to President Donald Trump for a five-day review, and he will decide whether to allow its release -- as he did with the Republican document last week.

The Democratic document aims to counter the Republican document, which accused the FBI and Justice Department of abusing their authority in monitoring a onetime Trump campaign associate.

A White House spokesman says Trump will "consider" the Democratic memo's release the same way he considered the Republican document.

Schiff, the top Democrat on the House intelligence panel, responded to Trump on Twitter Monday after the president called him one of the "biggest liars and leakers in Washington."

Says Schiff: "Mr. President, I see you've had a busy morning of `Executive Time.' Instead of tweeting false smears, the American people would appreciate it if you turned off the TV and helped solve the funding crisis, protected Dreamers or...really anything else."

The California Democrat has slammed the release of a congressional memo that alleges FBI surveillance abuses in an investigation into the Trump campaign's Russia ties.

Trump has said the GOP memo "vindicates" him. But Democratic and Republican lawmakers say that assertion is wrong.

President Donald Trump is lashing out at the top Democrat on the House Intelligence Committee, saying he "must be stopped."

Trump says on Twitter Monday: "Little Adam Schiff, who is desperate to run for higher office, is one of the biggest liars and leakers in Washington, right up there with Comey, Warner, Brennan and Clapper! Adam leaves closed committee hearings to illegally leak confidential information. Must be stopped!"

Schiff has slammed the release of a congressional memo that alleges FBI surveillance abuses in an investigation into the Trump campaign's Russia ties. The California Democrat said on ABC Sunday that it was a "political hit job."

Trump has said the GOP memo "vindicates" him. But Democratic and Republican lawmakers say that assertion is wrong.

Schiff did not immediately respond to a request for comment.

Some lawmakers doubt President Donald Trump's claim that a Republican-produced classified memo on FBI surveillance powers clears him in the Russia investigation.

And that's both Democrats and Republicans who feel that way.

The committee rejected that move last week. The Senate's Democratic leader, Chuck Schumer of New York, urged Trump to back the public release and said refusing to do so would show the president's intent to undermine the Russia investigation.