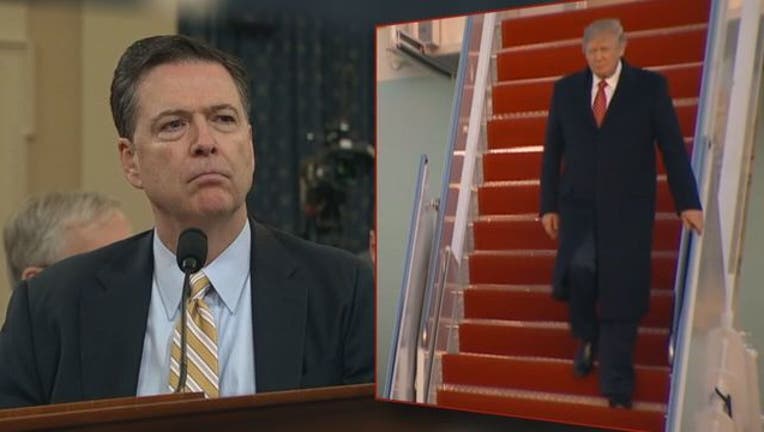 WASHINGTON (AP) -- Bipartisan leaders on the House Intelligence Committee are threatening a subpoena if the White House doesn't clarify whether any recordings, memoranda or other documents exist of President Donald Trump's meetings with fired FBI Director James Comey.

The panel had previously set a June 23 deadline for the White House to respond to its request. The day before, Trump said in a series of tweets that he "did not make, and do not have, any such recordings" but also said he has "no idea" if tapes or recordings of his conversations with Comey exist.

The White House then responded to the committee request by referring to Trump's tweets.

The committee had asked for any recordings after Trump suggested there may be tapes. He did so just days after he fired Comey, who was leading an investigation into Trump associates' ties to Russian officials. Trump has disputed Comey's assertion that the president asked him for a pledge of loyalty during a dinner meeting they had.

When news of Comey's account broke, Trump tweeted that Comey "better hope that there are no `tapes' of our conversations before he starts leaking to the press!"

A letter Thursday from Republican Rep. Mike Conaway of Texas, who is leading the Russia probe, and Democratic Rep. Adam Schiff of California says Trump's June 22 Twitter statement "stops short of clarifying" whether the White House has any tapes or documents.

Conaway and Schiff said in a statement that the letter makes clear that should the White House not respond fully, "the committee will consider using compulsory process to ensure a satisfactory response."

The panel is investigating Russian intervention in the 2016 elections, including any possible links to the Trump campaign. Interviews set for July include former national security adviser Susan Rice, who asked government analysts to disclose the name of Trump associates documented in intelligence reports. She has firmly denied that she did anything inappropriate, but Trump has said she may have committed a crime.

On Thursday, Rice spokeswoman Erin Pelton said Rice "is cooperating with the bipartisan Russia investigations conducted by the intelligence committees, as she said she would."

Sessions insisted in an appearance before the Senate intelligence committee this month that he had not violated his decision in March to recuse himself from any investigation related to inquiries involving Trump's 2016 campaign. During his testimony, Sessions said it would be "absurd" to suggest a recusal from a single investigation would render him unable to manage leadership of the FBI.