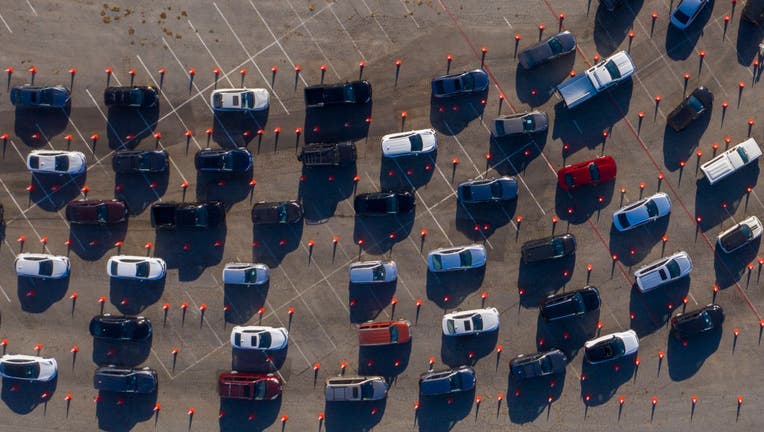 In an aerial view from a drone, cars line up at Dodger Stadium for COVID-19 testing on November 14, 2020 in Los Angeles, California.

SACRAMENTO, Calif. - At this stage of the vaccine rollout it seems unfathomable that Los Angeles would be forced to temporarily close its largest vaccination site at Dodger Stadium and four other locations because they are out of doses. But it’s happened and it raises questions about how local, state and federal governments determine where to send scarce vaccine doses.

HOW ARE DOSES ALLOCATED?

The federal government decides each week how many vaccines a state will get, then the state determines how to divide them among counties and major health systems. Counties and health systems almost always ask for more than they get, the result of having far more capacity than available shots.

The state divvies up the vaccine through a formula aimed at estimating how many people in an area are eligible.

Initially, the formula focused on health care workers, relying on data from employers to determine how many doses to send where. Now it’s expanded to include people 65 and over and other job categories, with the state pulling Census and demographic data from the state Department of Finance, said Darrel Ng, a spokesman for the California Department of Public Health. Since far more people are eligible than vaccines available, the state doles out doses on a proportional basis.

Counties are given wide latitude to determine how to distribute vaccines among providers, Ng said.

In Kern County, officials try to be equitable in how doses are distributed, ensuring they don’t only go to entities in the largest city of Bakersfield but also rural areas, said Kim Hernandez, the county’s lead epidemiologist.

The county also takes into consideration how many doses facilities have administered in the past and how much they have on hand to determine how the vaccine can be distributed effectively, she said.

HOW MANY VACCINES HAVE BEEN GIVEN OUT?

California has administered nearly 5.3 million shots of the vaccines manufactured by Moderna and Pfizer. Each requires two shots for full effectiveness.

Los Angeles County has a quarter of the state’s population of nearly 40 million people and has given a similar percentage of the shots — about 1.3 million, according to state data.

The second and third most populous counties, San Diego and Orange, have administered 550,000 and 423,00 shots, respectively.

WHAT HAPPENED IN LOS ANGELES?

Los Angeles Mayor Eric Garcetti said Wednesday that the city of 4 million people got only 16,000 shots this week, 90,000 fewer than the week before and about the total the city normally administers each day.

He didn’t provide an explanation for the sharp decline but said: "It’s not where we deserve to be."

In an email, the county Department of Public Health described its methodology for vaccine distribution but did not specifically explain why the city’s allotment fell so much.

Each week, the county surveys vaccination providers to find out how many second dose appointments have been made, according to the agency. The county distributes shots to cover those, then prioritizes remaining doses for vaccination centers providing first shots for people in the hardest-hit communities and high-risk populations like the elderly.

"There was not ample vaccine for the large capacity sites to operate this week at high volume for first dose appointments," the email said.

"I don’t think keeping Dodger Stadium open makes sense if the amount of vaccine that they have could just as easily be done in a high school gymnasium or something," he said. "But you do have to wonder, for a county as populous as LA and as hard hit as LA has been, where is the vaccine?"

"There hasn’t been enough transparency, in my opinion, on doses," he added.

Very soon. Creating more transparency and accountability in how vaccines are distributed is the stated goal of a new state partnership with Blue Shield of California.

The state hired the health insurer to act as a third-party administrator that can centralize California’s distribution system. All counties will be asked to start using a single state site for registering people to get vaccinated, called MyTurn, so the state can better analyze the data on who is being vaccinated.

Gov. Gavin Newsom said Blue Shield’s new program will launch next week, but some counties and health providers say they still lack details on how it will work. Newsom said the state will release its contract with the company this week.