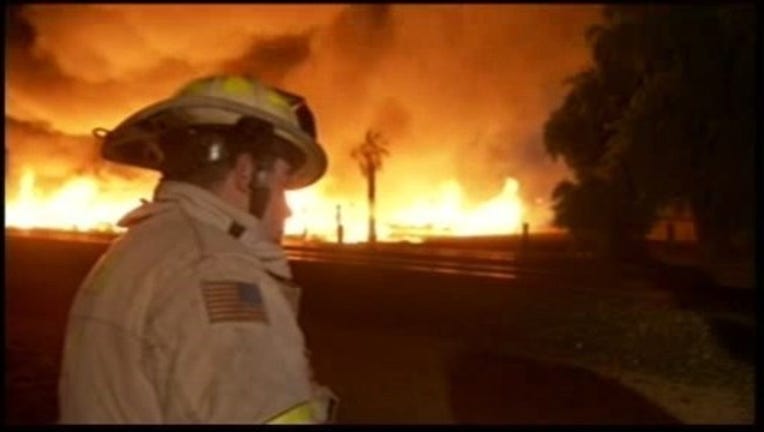 FRESNO, Calif. (AP) -- A massive fire at a power pole yard in Fresno Thursday morning is sending flames and smoke soaring into the sky and it could be a full day until the powerful blaze is controlled.

Fresno Fire Department spokesman Pete Martinez said crews had to cut across private property and railroad tracks to get water onto the fire. They are now pumping up to 3,000 gallons of water a minute onto the flames, he said.

At least two dozen firefighters working from a dozen trucks and engines are on scene fighting the stubborn blaze.

Martinez said the closest homes are two to three miles away. There are no reports of injuries.

The San Joaquin Valley Air Pollution Control District says the large industrial fire may periodically affect air quality in Fresno, Kings, Tulare and the valley portion of Kern counties. A "health caution" is in place until the fire is extinguished.

The fire generates fine particulates that can cause problems for people with respiratory conditions, young children and elderly people, the air district reports.

"It's one of those things where any smoke is hazardous but the winds are blowing a lot of the smoke into the atmosphere," Martinez said.

There are between 400 and 1,000 wooden power poles on the two-acre yard that are either burned or threatened, Martinez said. Damage is now estimated at $1.3 million, he added.

The poles burned with such intensity that motorists along a nearby street said they could feel radiating heat through their windshields. Some drivers pulled off the road to snap pictures with their cell phones.

The fire was first reported at 3:45 a.m. along State Route 99 northwest of downtown. The fire is near Brawley Avenue and Golden State Boulevard and motorists should avoid the area.

Martinez says Pacific Gas and Electric owns the poles, but stores them on the private property. The poles are coated with an oil-based product but not creosote, Marteinz said.