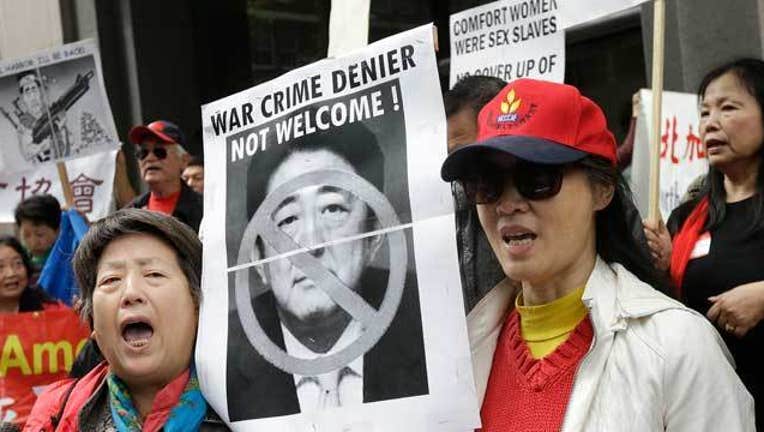 SAN FRANCISCO (AP) — Hundreds of people protested outside the Japanese Consulate in San Francisco, calling on Prime Minister Shinzo Abe to apologize for his country's treatment of people from other Asian countries during World War II.

Tuesday's protest comes days before the prime minister is scheduled to visit California, as part of weeklong trip to the United States that includes a State Dinner at the White House. Korean Americans and Chinese Americans at the protest chanted and waved signs. They spoke in both English and Cantonese and held high the South Korean flag.

"It's never too late to apologize because the insult and the wound that had been inflicted by Japan will not be forgotten until there is an apology," said Peter Li, retired professor of East Asian history at Rutgers University.

The Japanese Consulate in San Francisco had no comment.

Abe has faced demands that he use this trip to address Japan's use of tens of thousands of sex slaves during World War II to serve Japanese troops. As many as 200,000 "comfort women" from Korea, China and other countries were forced into the roles. South Korea has demanded a more forthright and complete apology from Abe.

At a White House news conference Tuesday after meeting with President Barack Obama, Abe sidestepped a question on whether he would apologize, saying instead that he was "deeply pained" by the suffering of "comfort women."

The activists in San Francisco also called for Japan to compensate "victims of Japanese aggression," punish officials who deny war crimes and revise how World War II is taught in Japanese textbooks.

Japan surrendered 70 years ago this summer, ending the war.

Abe is scheduled to address a joint session of Congress on Wednesday. He plans to travel to Silicon Valley and San Francisco on Thursday, where he will meet with California Gov. Jerry Brown, before heading to Los Angeles on Friday.