Hurricane Fiona has moved back into the Atlantic Ocean after making two landfalls in the past 24 hours. Fiona first crashed into the extreme southwestern coast of Puerto Rico on Sunday afternoon, leaving catastrophic flooding and 90% of the island in the dark, and then hit the eastern Dominican Republic about 12 hours later, early Monday morning.

As of Monday evening, Hurricane Fiona had winds of 100 mph and was moving northwest at 10 mph. Even with Hurricane Fiona's exit, heavy rain from Fiona will continue across Puerto Rico and the Dominican Republic through this evening. The National Hurricane Center warns that these rains could produce life-threatening and catastrophic flooding along with landsides in Puerto Rico and the Dominican Republic.

Damage from Hurricane Fiona in Puerto Rico and the Dominican Republic

Maximum sustained winds for Hurricane Fiona's first landfall in Puerto Rico were estimated at about 85 mph, making it a Category 1 hurricane on the Saffir-Simpson Hurricane Wind Scale. High winds were reported across the island on Sunday, including a 103-mph wind gust in the city of Ponce. 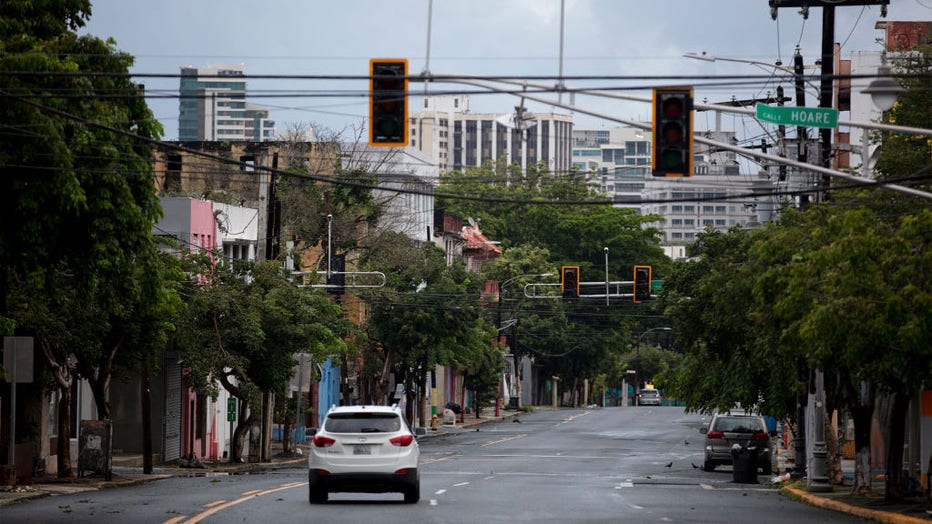 Hurricane Fiona was slightly stronger for its second landfall in the Dominican Republic, with maximum sustained winds estimated at about 90 mph – still a Category 1 hurricane. The Punta Cana International Airport clocked a 79-mph wind gust near the time of landfall in the pre-dawn hours of Monday. A gust of 98 mph was later recorded in Samana at El Catey International Airport on Monday afternoon. 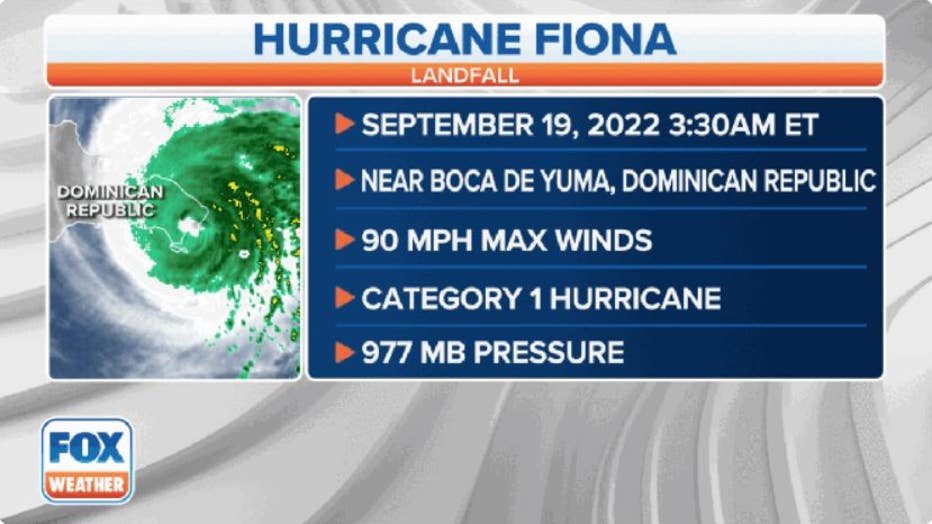 The entire archipelago of Puerto Rico plunged into a blackout Sunday afternoon as Hurricane Fiona's high winds caused severe damage to the U.S. territory's power grid, which was destroyed by Hurricane Maria about five years ago in October 2017. Nearly 1.5 million customers were without power on Sunday afternoon.

BY THE NUMBERS: HOW HURRICANE FIONA COMPARES WITH HURRICANE MARIA IN PUERTO RICO

According to LUMA Energy – the power company responsible for Puerto Rico – power had been restored to about 100,000 customers as of Monday morning within the municipalities of Toa Alta, Toa Baja, the San Juan metropolitan area, Bayamón and Corozal. However, more than 1.3 million were still without electricity, which is nearly 90% of Puerto Rico. 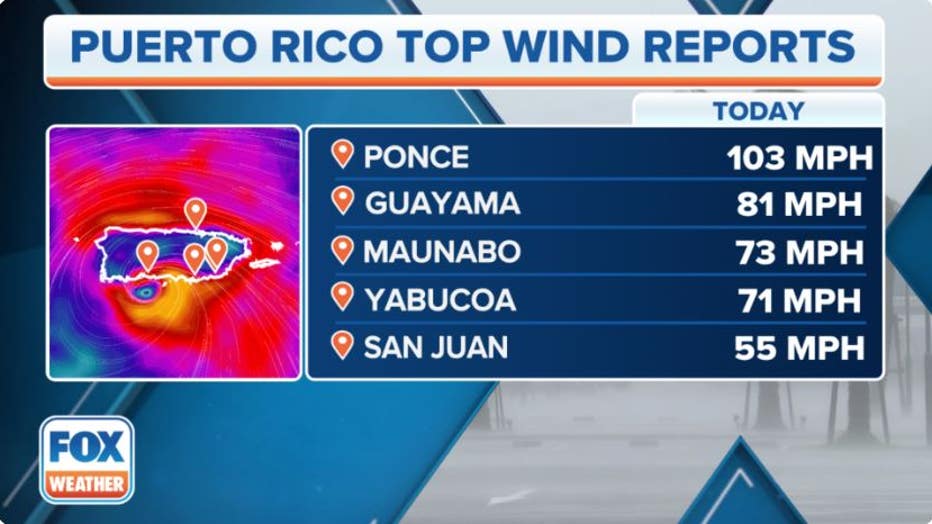 In addition to the blackout, torrential rain from Hurricane Fiona has caused "catastrophic flooding" across Puerto Rico, the National Hurricane Center said.

The National Weather Service office in San Juan had issued a Flash Flood Emergency for parts of Puerto Rico on Sunday night as the catastrophic flood event was producing 2 to 4 inches of rain per hour.

More than 2 feet of rain has already fallen in portions of Puerto Rico from Hurricane Fiona, including Ponce and Lago Cerrillos, over the past two days. 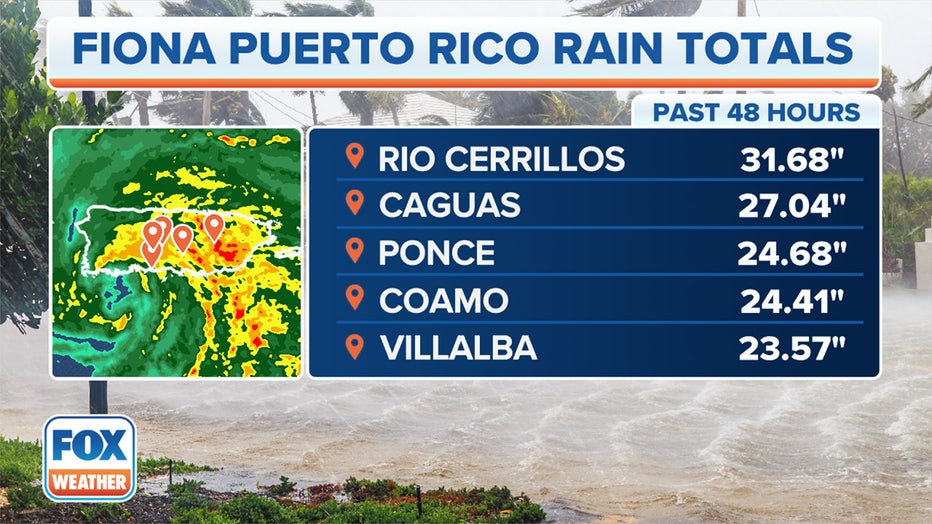 Puerto Rico Gov. Pedro Pierluisi held a news conference Monday morning to provide updates on the impacts that Hurricane Fiona had and is still having on the island.

Pierluisi said that, so far, 128 shelters have been opened across the island's 78 municipalities. He said there are currently 2,146 people and more than 250 pets being helped in 113 of those shelters.

Shelters are available in the communities of Aibonito, Florida, Barceloneta and Hatillo, but so far, no one has needed to take refuge there.

In addition, 1,000 people needed to be rescued in 25 municipalities, and rescues are continuing for people who have been trapped due to Hurricane Fiona's effects.

Water service has also been severely affected by Hurricane Fiona.

According to Pierluisi, only 30% of Puerto Rico Aqueduct and Sewer Authority customers have water service. 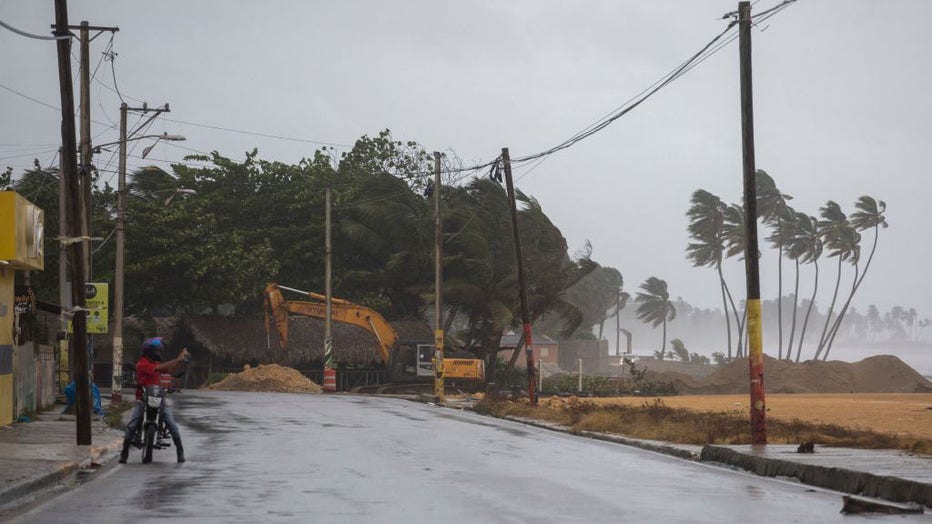 A man takes pictures as palm trees blow in the wind in Nagua, Dominican Republic, on Sept. 19, 2022, during the passage of Hurricane Fiona. (Photo by ERIKA SANTELICES/afp/AFP via Getty Images)

President Joe Biden approved an emergency declaration for Puerto Rico on Sunday ahead of Hurricane Fiona’s arrival. That declaration authorized the Federal Emergency Management Agency to mobilize equipment and resources necessary to alleviate the impacts of the storm.

Some residents of Puerto Rico did not take the storm for granted and used the hours before Fiona's arrival to stock up on gasoline and other supplies.

Hurricane Fiona turned deadly Friday evening after a man was swept away by floodwaters on the French Caribbean island of Guadeloupe after heavy rainfall.

Where is Hurricane Fiona?

As of Monday evening, Hurricane Fiona had maximum sustained winds of 100 mph with higher gusts, a Category 2 storm. Fiona was slowly moving off to the northwest at 10 mph. The hurricane's center was back over water, about 130 miles southeast of Grand Turk Island.

Hurricane Fiona's wind and rain impacts will continue to affect the Dominican Republic through early Tuesday while the hurricane's outer rainbands also persist over Puerto Rico into Monday night.

WHAT'S THE DIFFERENCE? TROPICAL DEPRESSION VS. TROPICAL STORM VS. HURRICANE 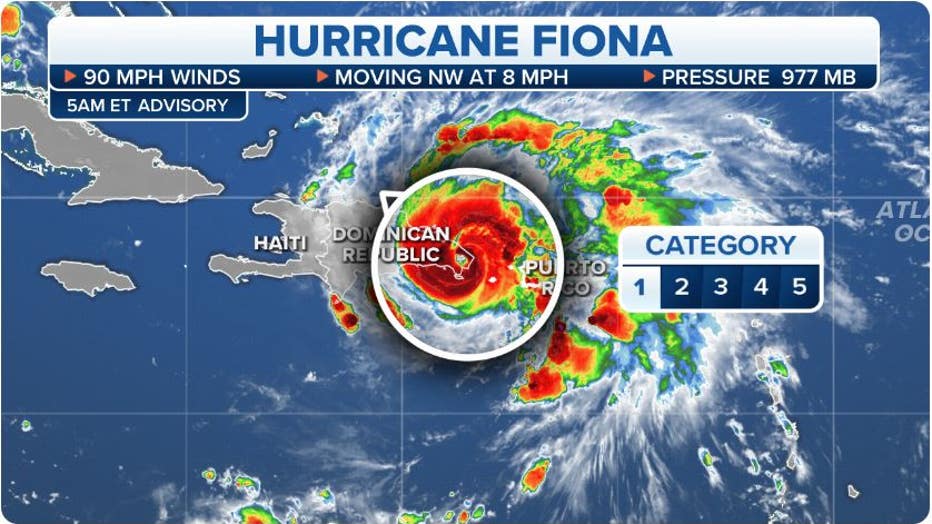 What are the impacts of Hurricane Fiona?

Hurricane-force winds from Fiona are expected to reach the Turks and Caicos on Tuesday. Winds from Hurricane Fiona will taper off for Puerto Rico and the Dominican Republic as the hurricane move further away.

These strong winds are expected to reach portions of the southeastern Bahamas by early Tuesday.

A hurricane is a tropical cyclone with maximum sustained winds of 74 mph or more.

Heavy rain from the outer bands of Hurricane Fiona will continue across Puerto Rico through Monday night. Heavy rainbands will also persist over portions of the Dominican Republic through early Tuesday. 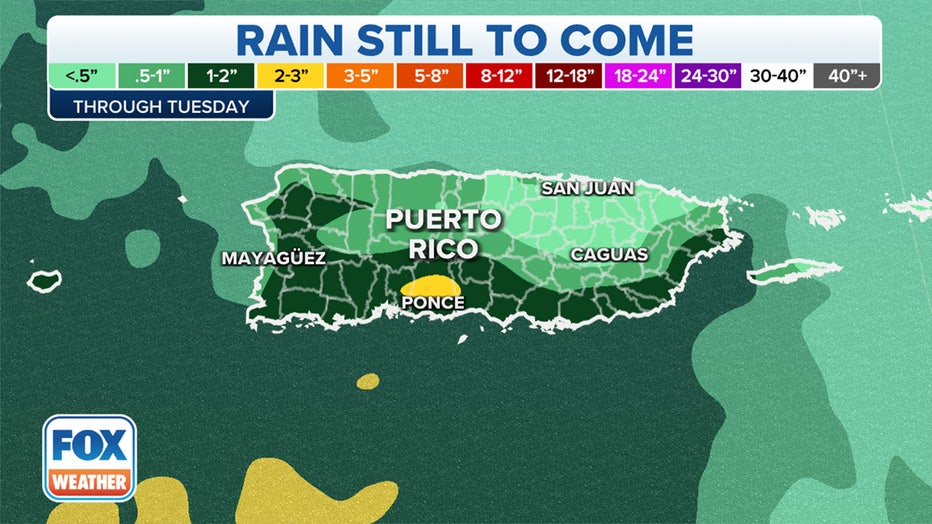 Hurricane Fiona is expected to dump an additional 4 to 8 inches of rain across southern Puerto Rico, with isolated amounts up to 15 inches. Storm totals between 12 and 20 inches are expected, with localized maximum amounts over 30 inches.

In northern portions of Puerto Rico, an additional 1 to 4 inches of rain is likely, with isolated amounts up to 6 inches. That will result in storm totals of 4 to 12 inches, with localized maximum amounts up to 20 inches.

According to the National Hurricane Center, the heavy rain from Hurricane Fiona will continue to produce life-threatening and catastrophic flooding, along with mudslides and landslides, across Puerto Rico.

Flood Watches from Hurricane Fiona remain in effect for portions of Puerto Rico and the U.S. Virgin Islands through Tuesday evening. 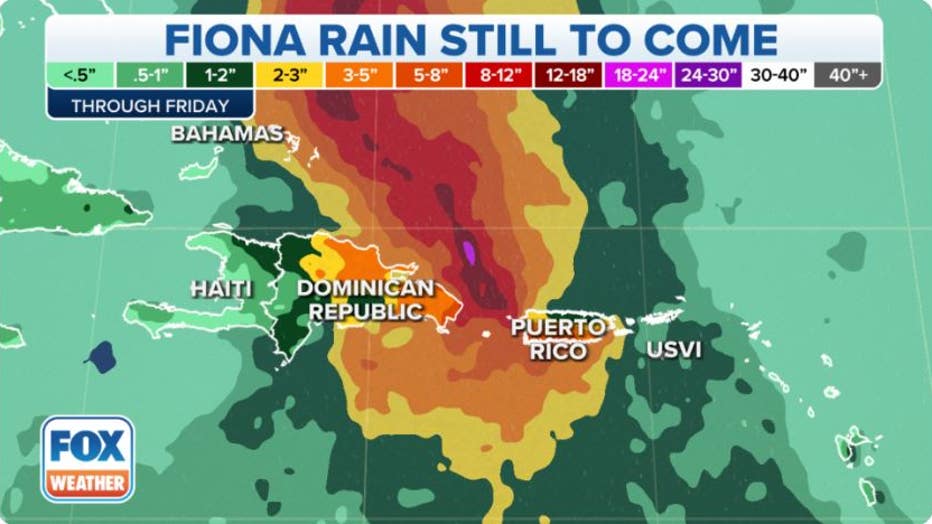 Life-threatening flash and urban flooding is also likely in eastern portions of the Dominican Republic, the NHC said.

Between 3 and 6 inches of rain are predicted for the rest of the Dominican Republic.

The Turks and Caicos are expected to receive 4 to 8 inches of rain from Hurricane Fiona, while the southeastern Bahamas are forecast to pick up 1 to 3 inches of rain.

Where are watches and warnings in effect?

The NHC downgraded the Warning to a Hurricane Watch for the northern coast of the Dominican Republic from Cabo Frances Viejo westward to Puerto Plata. A Hurricane Watch means sustained winds of at least 74 mph are possible – in this case, within the next 12 to 24 hours. 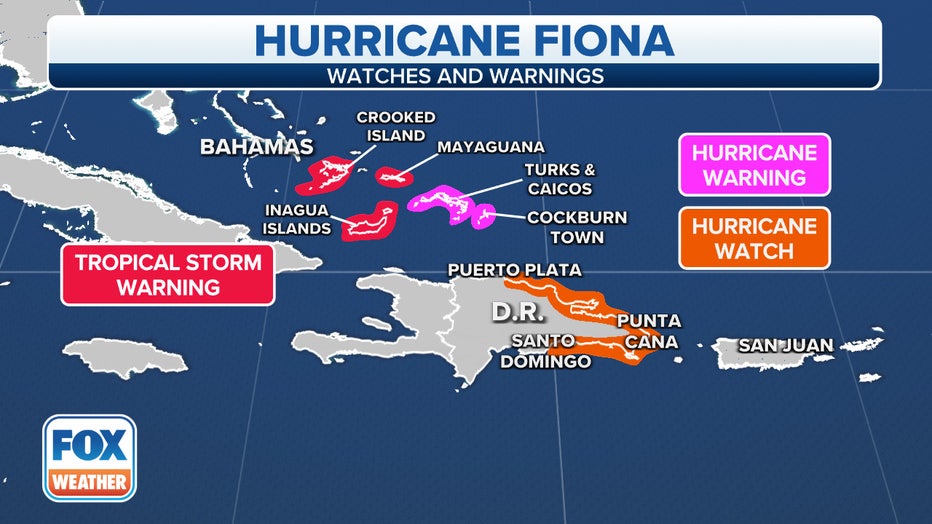 Watches and warnings are in effect along the path of Hurricane Fiona.

What is the forecast for Hurricane Fiona?

Back over the warm Atlantic Ocean waters, Hurricane Fiona is gradually strengthening and moving slowly toward the northwest through Monday night before turning more northerly on Tuesday and eventually a northeastward turn by Wednesday.

According to the FOX Forecast Center, this track will take the center of Hurricane Fiona near or to the east of the Turks and Caicos on Tuesday.

As Fiona continues to gather strength, it is forecast to become a major hurricane (Category 3 or stronger) on Tuesday.

Computer models take Fiona through and past Bermuda late Thursday as a major hurricane. Take a look at the cone of uncertainty below with the forecast track.

"Interests in Bermuda should monitor the progress of Fiona," wrote the NHC in their latest forecast discussion. 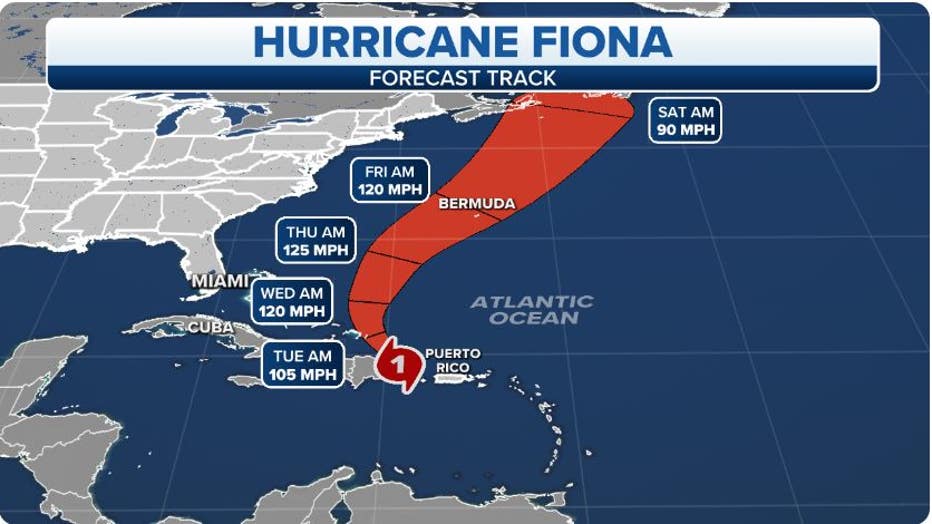 The projected path and intensity of Hurricane Fiona. (FOX Weather)

Will Hurricane Fiona threaten Florida or the U.S. East Coast?

A dip in the jet stream is forecast to move over Florida and the Bahamas early this week, which will provide an opening for Hurricane Fiona to make a northward turn away from the U.S. coast.

According to the FOX Forecast Center, confidence has increased in Fiona's track which will take it near or to the east of the Turks and Caicos on Tuesday and then out into the western and central Atlantic – away from Florida and the U.S. East Coast.

However, Fiona will intensify as it moves north, potentially into a Category 3 or stronger hurricane, and these high winds will send large waves toward the U.S. East Coast toward the end of the week, increasing the risk of life-threatening rip currents.

The FOX Forecast Center puts Bermuda within the forecast cone for late Thursday.

The various possibilities of Fiona's track overlaid on the five-day forecast cone of uncertainty are shown on the map below, and you can see there's good agreement among the computer forecast models on a track away from the U.S.

WHAT IS THE CONE OF UNCERTAINTY IN HURRICANE FORECASTS? 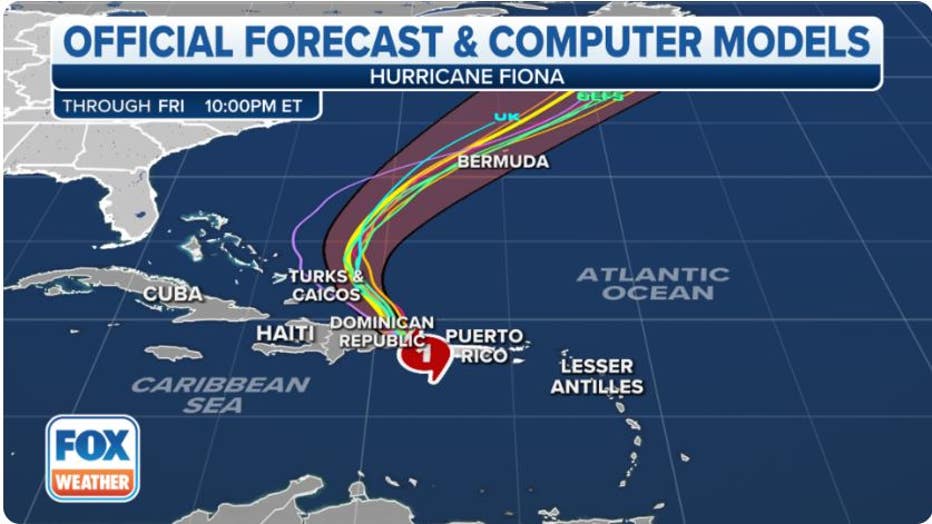 Two more areas to watch in the Atlantic

In the central subtropical Atlantic, a weak area of low pressure is producing disorganized showers and thunderstorms.

According to the FOX Forecast Center, some slow development of this system is possible over the next couple of days before environmental conditions become less favorable later this week.

This system is expected to generally move northward or northeastward while remaining over the open central subtropical Atlantic.

The National Hurricane Center currently gives the system a low chance of development in the next five days. 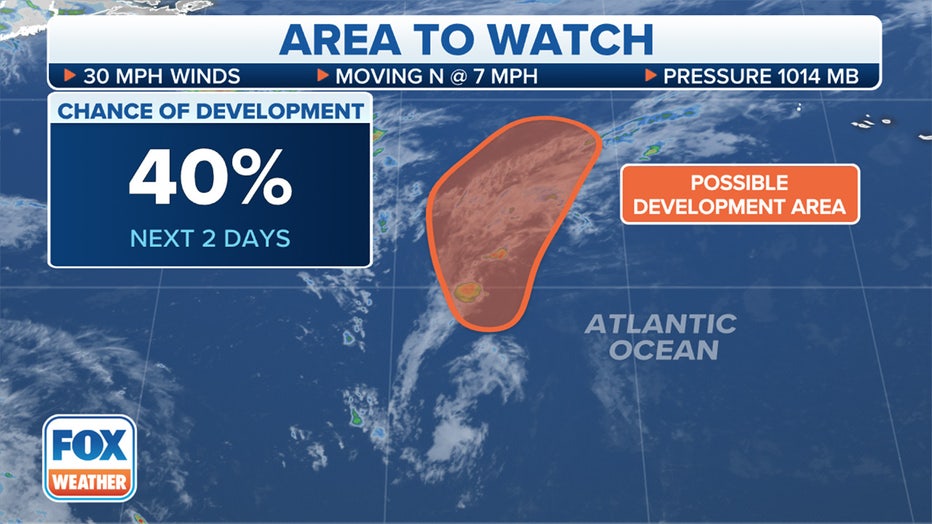 An area in the central subtropical Atlantic is being monitored for possible tropical development.

Meanwhile, a second area of thunderstorms has caught the attention of tropical forecasters.

A tropical wave several hundred miles east of the Windward Islands currently has an area of disorganized thunderstorms, but some gradual development is possible as the disturbance moves closer to the islands. Forecasters only give a medium chance, about 40%, for development over the next two days but will continue to monitor the disturbance for the next several days.

The NHC expects the system, even if it develops into a tropical depression to remain over the open waters.

2022 Atlantic hurricane season off to a slow start

Early to mid-September is the time of the season when sea-surface temperatures are the warmest, upper-level winds relax, and drier air is typically not widespread.

Unlike recent active years, dry air has been more dominant than usual across the eastern parts of the Atlantic Basin, which has stunted the organization and development of tropical cyclones.

August ended without seeing a single tropical cyclone in the Atlantic Basin for only the second time in the satellite era.

HURRICANE SEASON 2022: AUGUST FINISHES WITHOUT ANY NAMED STORMS FOR FIRST TIME IN DECADES 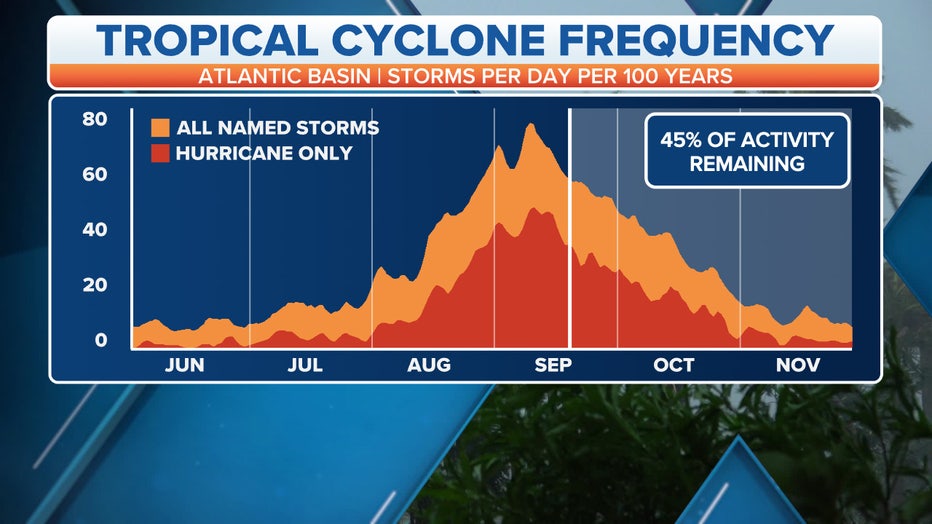 While the Atlantic hurricane season officially runs from June 1 to Nov. 30, Sept. 10 is the date when the most hurricanes and tropical storms have occurred in the historical records.