The officer described the bag as having a small rubber band around the middle giving it a bow shape, and added that it was attached to a bobby pin.

FLIPPIN, Ark. - An Arkansas woman was facing multiple charges after police discovered that she was wearing a bag of methamphetamine disguised as a bow in her hair, according to authorities.

Jessica Kropp, 38, was arrested Sept. 24 in the city of Flippin, located about 100 miles northeast of Fayetteville, after being pulled over for driving with expired tags, according to an arrest affidavit. 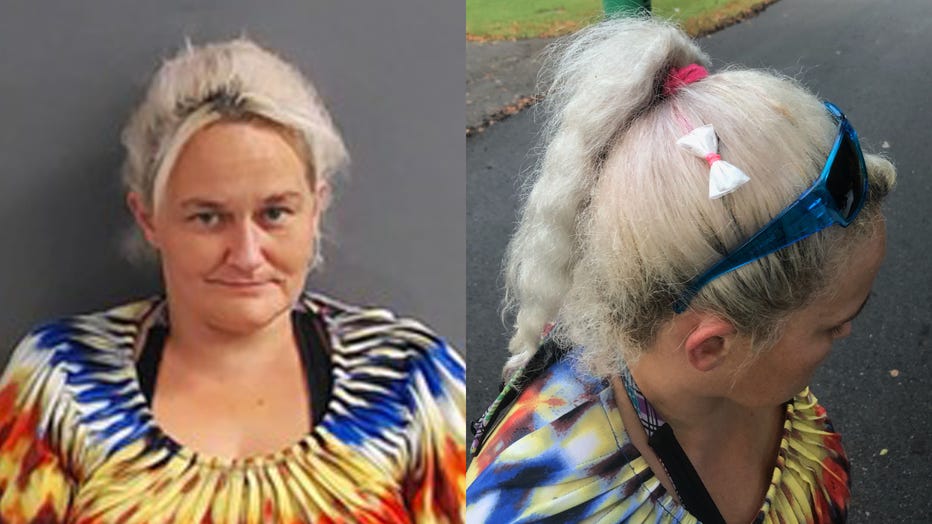 Jessica Kropp, 38, is pictured in a booking photo after her arrest, alongside a provided photo of the bag disguised as a bow in her hair. (Photo credit: Marion County Sheriff’s Office / Flippin Police Department)

Flippin police officer Kenneth Looney noted that Kropp initially failed to stop and drove through a nearby neighborhood before eventually pulling over, the affidavit states.

When Looney asked for her driver's license, Kropp said it was suspended, according to police. She also told the officer she did not have insurance and that she was borrowing the car, so did not know where the registration for the vehicle was located.

Looney also discovered that Kropp had five warrants out for her arrest, which included four failure to appear warrants and one failure to pay fines warrant, according to the affidavit.

Looney then ordered Kropp to step out of the car to place her under arrest.

“As I was detaining Jessica Kropp, I observed what appeared to be a bow in her hair,” the arrest affidavit states. “The bow appeared to be a small, zip-locked bag containing a white crystal-like substance of suspected methamphetamine.”

Looney described the bag as having a small rubber band around the middle, “giving it a bow shape,” and added that it was attached to a bobby pin. He said it was placed on the right side of Kropp’s head, attached to her hair.

“I said ‘Are you serious?’ She said ‘What?’ I said ‘You have a bow in your hair made from a bag of meth,’” the affidavit reads. “She said ‘(Expletive), I didn't know that was there, someone else put that there and I didn't know what it was.'”

Looney then searched the vehicle and reported finding multiple bags of meth and drug paraphernalia, according to the affidavit.

Kropp was charged with possession of meth with the intent to deliver, possession of drug paraphernalia, driving on a suspended license, no liability insurance and a failure to appear misdemeanor.

She was taken to the Marion County jail and being held in lieu of a $22,530 bond, online records show.