WASHINGTON - As his presidency came to a close, Donald Trump waved goodbye from the steps of the White House one last time.

Not long after, the 45th president boarded Air Force One from Joint Base Andrews with his family, addressing a crowd of supporters before heading to his Mar-a-Lago estate in Florida.

"I just want to say you are amazing people this is a great, great country. It is my greatest honor and privilege to have been your president," Trump said on Wednesday morning.

The former president headed to Florida before President Joe Biden's inauguration started. It's the first of such an act from a sitting president in 150 years.

In his final days in office, Trump was preparing to issue a flurry of pardons in a near-deserted White House, surrounded by an intense security president outside.

Monday night, in a nine-minute speech, the former president relayed one of many farewell messages. This time he highlighted his top achievements, which included normalizing relations in the Middle East, getting the COVID-19 vaccine out, and the creation of the new Space Force.

"In short, we embarked on a mission to make America great again for all Americans," Trump said. "As I conclude my term as the 45th president of the United States, I stand before you truly proud." 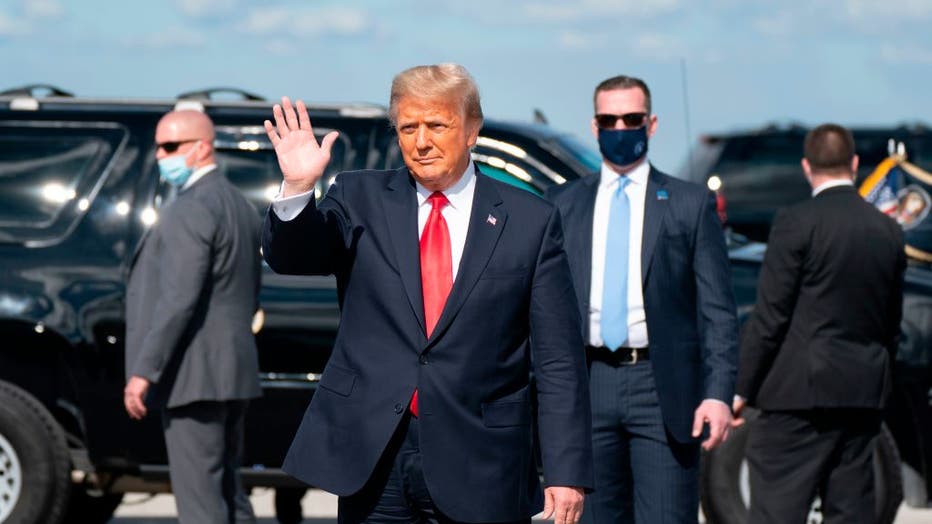 On the morning of the inauguration, he delivered unscripted remarks from the White House lawn and on the tarmac at Joint Base Andrews, stepping to the podium with a send-off message that included farewell wishes to congress and President Joe Biden.

"I will always fight for you. I will be watching,  I will be listening, and I will tell you that the future of this country has never been better. I wish the new administration great luck and great success," Trump said.

Before the family landed in Florida Wednesday morning, the former president gave his wife, Melania, a chance to share a few parting words.

"Being your First Lady was my greatest honor. Thank you for your love and your support. You will be in my thoughts and prayers. God Bless you all," Melania Trump, the 45th First Lady said.

The former president wrapped up his last moments in our nation's capital as the presidents of the United States with these final words for Americans: "The things that we've done have been incredible and I couldn't have done it without you. so just a good-bye, we love you, we will be back in some form."

It's been confirmed that Trump left a farewell note for President Joe Biden, a common practice during the exchange of presidency.

The White House did not release the contents of the note, a White House spokesperson says it's a letter between the two of them.