Thousands without power in Louisiana following Ida | LiveNOW from FOX

Some of the hardest-hit areas of Louisiana weren’t estimated to have power restored until the end of the month after it was knocked out last week by Hurricane Ida.

Though the state’s largest electric utility, Entergy, estimated most residents in New Orleans will have power by Wednesday, recovery efforts outside of the city were expected to take much longer.

Some parishes were battered for hours by winds of 100 mph or more. More than 22,000 power poles were damaged or destroyed in the storm, which is more than hurricanes Katrina, Zeta and Delta combined. More than 5,200 transformers failed and nearly 26,000 spans of wire — the stretch of transmission wires between poles — were down. 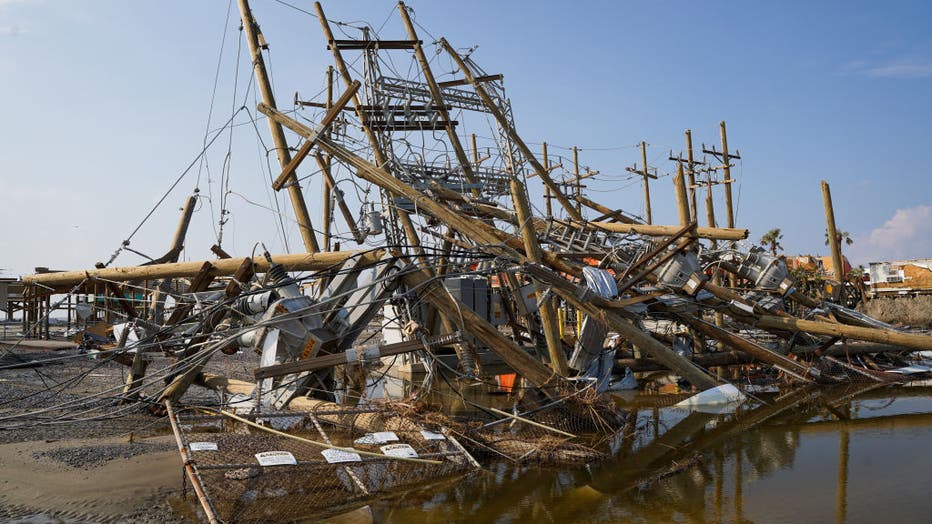 GRAND ISLE, LA - SEPTEMBER 4: An electrical substation stands in the wake of Hurricane Ida on September 4, 2021 in Grand Isle, Louisiana. Ida made landfall as a Category 4 hurricane six days before in Louisiana and brought flooding, wind damage and p

"The level of devastation makes it quite difficult or near impossible to get in and fully assess some places," said Entergy President and CEO Phillip May of five southeastern Louisiana parishes facing the longest delays. The company is estimating full power restoration by Sept. 29 or even longer for some customers.

RELATED: Ida vs. Katrina: How do they compare?

By Saturday morning, 97% of damage assessment was complete and power restored to about 282,000 customers from the peak of 902,000 blacked out after Ida.

About a quarter of New Orleans residents had power back, including all the city’s hospitals, and the city’s 27 substations are ready to serve customers, said Deanna Rodriguez, Entergy New Orleans president and CEO.

As recovery efforts continued, state officials were monitoring a system of disturbed weather in Mexico's Bay of Campeche, which appeared set to move into the Central Gulf of Mexico closer to Louisiana.

Louisiana Gov. John Bel Edwards said the state is planning an exercise to assess its emergency response if needed. Predictions so far don’t show the system strengthening into a hurricane, but he said "even if it’s a tropical storm, we’re in no state to receive that much rainfall at this time."

"We can’t take the playbook we normally use because the people and assets are no longer where they would have been," Edwards said. "How do you staff up shelters you need for the new storm and continue to test for COVID? My head’s getting painful just thinking about it. ... We will be as ready as we can be, but I’m praying we don’t have to deal with that."

Meanwhile, Coast Guard crews were responding Saturday to a sizable oil spill in the Gulf of Mexico following the storm. The ongoing spill appears to be coming from an underwater source at an offshore drilling lease about two miles south of Port Fourchon, Louisiana.

Satellite images showed oil slicks off Louisiana’s at Port Fourchon on September 2, days after Hurricane Ida made landfall and wrought destruction on the state. Credit: Maxar Technologies/Copernicus Sentinel-2 via Storyful

RELATED: ‘We’re going to have your back’: Biden tours Hurricane Ida damage in Louisiana

President Joe Biden arrived Friday to survey storm damage, touring a neighborhood in LaPlace, between the Mississippi River and Lake Pontchartrain that suffered catastrophic wind and water damage that sheared off roofs and flooded homes.

The president also promised full federal support to the Northeast, where Ida’s remnants dumped record-breaking rain and killed at least 50 people from Virginia to Connecticut.

Louisiana's 12 storm-related deaths included five nursing home residents evacuated ahead of the hurricane along with hundreds of other seniors to a warehouse in Louisiana, where health officials said conditions became squalid and unsafe.

On Saturday evening, State Health Officer Dr. Joseph Kanter ordered the immediate closure of the seven nursing facilities that sent residents to the Tangipahoa Parish warehouse facility. "The lack of regard for these vulnerable residents’ wellbeing is an affront to human dignity. We have lost trust in these nursing homes to provide adequate care for their residents," Kanter said.

The health department on Friday reported the death of a 59-year-old man believed poisoned by carbon monoxide from a generator running inside his home. Several post-storm deaths have been blamed on carbon monoxide poisoning, which can happen if generators are run improperly.