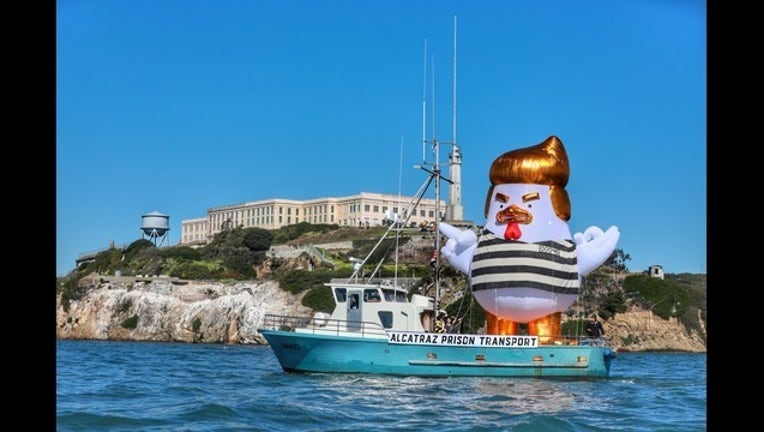 OAKLAND, Calif. (KTVU) - The giant inflatable blimp depicting President Donald Trump as a chicken is back on the San Francisco Bay on Sunday.

Known as 'Trump Chicken" and dressed in his “Prisoner 45” shirt (45th president), the 33-foot-tall chicken will be on the water from 11:30 a.m. to 3:00 p.m. Trump Chicken arrives at Crissy Field at noon before heading to Fisherman's Wharf in an "Alcatraz Prison Transport" boat. Trump chicken will move slowly down the Embarcadero towards the Ferry Building on the way to McCovey Cove.

Viewing spots include Crissy Field, Pier 39 and 43, the Ferry Building and McCovey Cove.

If you’re not familiar with the Trump Chicken, the San Francisco Tax March first brought it to America for the April 15 march last year, according to the organizer's website. The chicken has since been escorted to the “Big Coop,” or the White House and was recently seen drifting around Alcatraz on President's Day weekend.

Trump Chicken is mobilized by donors via GoFundMe. As of Saturday morning, the fundraiser has reached $1,245 of its $4,000 goal.