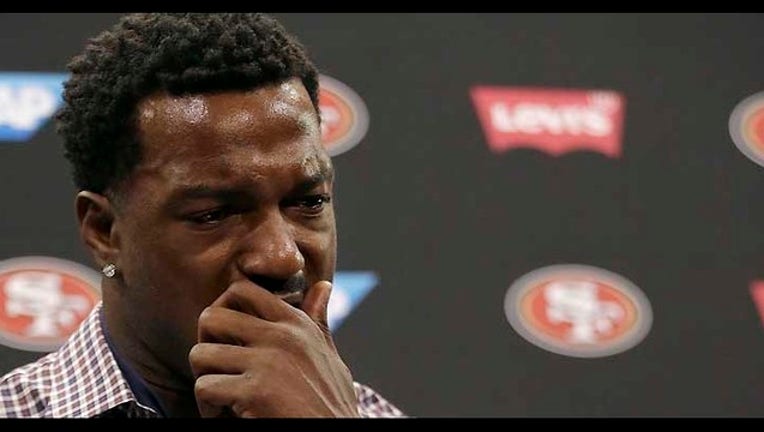 SANTA CLARA, Calif. (AP) — His eyes filling with tears, seven-time Pro Bowl linebacker Patrick Willis bid farewell to football and called it one of his happiest days yet because he is leaving on his own terms.

His tender size-13 feet — "12½ when they're bent" — can no longer handle the grind of NFL practices let alone the demands of game day.

Willis announced Tuesday he will retire after his 2014 season was cut short by a toe injury that required surgery and because of sore feet that make everything more of a challenge.

"In my head, I'm already a Hall of Famer," Willis said. "I am leaving this with closure, saying that I am happy today, more happy today than I was the day I was drafted. That says something to me."

San Francisco is losing its defensive captain and locker room leader, the player who often addressed the team before games with inspirational pep talks.

Willis isn't saying exactly what's next — perhaps a vacation, some speaking gigs, working with kids, a day of fishing, slow mornings with a cup of coffee instead of an intense workout.

Willis and friend NaVorro Bowman had made up one of the best 1-2 linebacker punches in the NFL until both missed time last season, the entire season for Bowman as he recovered from reconstructive knee surgery.

Now, Willis walks away without a Super Bowl ring that was so close following the 2012 season, when the 49ers lost by three points to the Baltimore Ravens in New Orleans.

The 30-year-old Willis was sidelined with a strained muscle in his left big toe. He was placed on season-ending injured reserve on Nov. 11 after getting hurt in the third quarter at St. Louis on Oct. 13.

"These feet, boy, boy, boy, I've made no excuses," said Willis, who notes his feet "spoke" to him. "When you don't have no feet, that's what has made me what I am. I no longer have in these feet to give you guys that kind of 'Wow.'"

Late Monday, Willis posted on social media a message that hinted at his farewell from football and included a series of references to Bible verses.

Willis had missed six games in his career before this latest injury sidelined him for the final 10 games of 2014 for San Francisco, which struggled to an 8-8 finish without him and missed the playoffs for the first time in four years.

About a half-dozen of his 49ers teammates attended his news conference at Levi's Stadium. Willis regularly wiped his eyes with a tissue.

Willis signed autographs for fans outside team headquarters and thanked the regular media who covered him.

The NFL Defensive Rookie of the Year in 2007 after being drafted 11th overall out of Mississippi, Willis started 112 games and had 950 tackles with 20½ sacks in eight seasons. Willis also had eight interceptions — two returned for touchdowns — 16 forced fumbles, five fumble recoveries and 53 passes defensed.

As word spread Monday that Willis was contemplating retirement, his former teammates and opponents took to Twitter in tribute to No. 52.

"Still have a chipped tooth from @PatrickWillis52 knocking me out. Congrats on a GREAT career man! Not a nicer guy out there!" quarterback Matt Leinart said.

"Without a doubt the greatest man/leader/friend/teammate @PatrickWillis52 my hero!" wrote former teammate and running back Marcus Lattimore, who was forced out of the game by knee injuries last year.

Both 49ers CEO Jed York and GM Trent Baalke spoke directly to Willis from the podium.

"Obviously, this is a bittersweet day for the San Francisco 49ers," York said. "Pat, we're going to miss you, we love you, we thank you for everything."

While the 30-year-old is walking away on a high note, die-hard 49er fans who waited outside to get Willis's autograph said it is hard to swallow.

"Honestly they hit a home run with the pick," said fan Miguel Duarte. "Regardless of his career being somewhat cut short., he's a consummate pro and in, my opinion, on my personal Mount Rushmore of the greatest 49ers of all time."