Brandon Paillet, the man arrested for recently breaking into a home in San Francisco, spoke to KTVU's Evan Sernoffsky from jail.

SAN FRANCISCO - The woman was watching television late at night when someone entered her home.

She’s been living in the house on the 400 block of Roosevelt Way on the edge of the Castro for years and never had any trouble. She figured the person who walked in around 11 p.m. Tuesday was her teenage daughter returning from dinner with her friend.

But when a strange man rounded the corner while talking to himself before sitting down just feet from where she was lying, she started to panic.

"I thought he was here to harm me or steal something. My mind went to things that were evil," the woman said in an interview with KTVU.

The woman – who asked not to be named to protect her safety -- can’t walk due to Multiple Sclerosis. 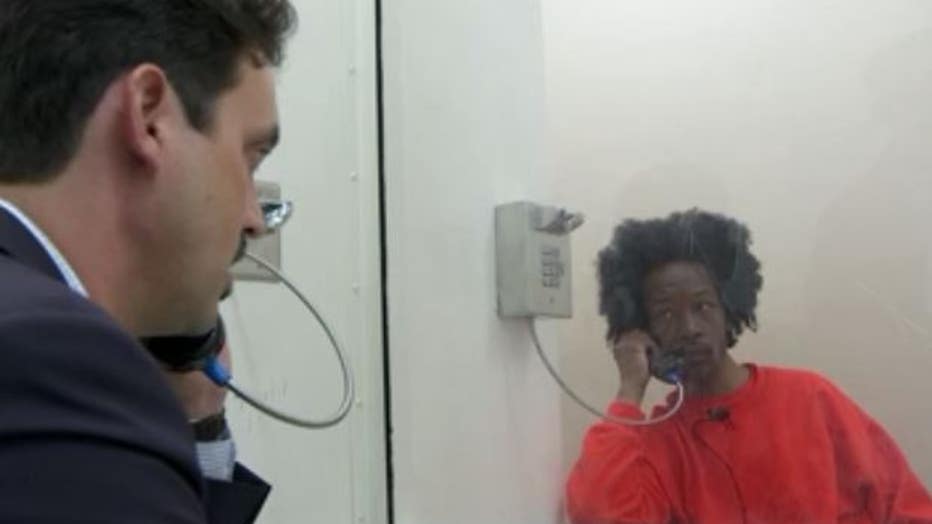 But what unfolded that night was just one in a string of bizarre incidents and crimes involving the man in her home, later identified as 39-year-old Brandon Paillett. He’s been in and out of San Francisco’s criminal justice system for nearly two decades and has apparent mental health issues despite his claims that he does not.

It turns out he didn’t harm the woman. As he sat down, she rolled off the sofa where she was watching television and started inching along the floor toward the front door. "I was slithering," she said.

Soon she called 911 as the stranger got up and took off his shoes and made himself at home.

When police arrived, she said he seemed to snap back to reality. But as officers approached the door, her fear returned. Paillett had locked the door he came in through and refused to open it for police, she said.

After several hard kicks, the door went flying open and multiple officers rushed at Paillett, tackling him to the ground. One officer was injured in the fracas and is recovering, said Officer Robert Rueca, a San Francisco police spokesman.

Paillett was booked in San Francisco jail, just five days after being released on an earlier kidnapping and carjacking case.

He was arrested on June 3 after allegedly trying to steal a pet groomer’s van while the groomer as still inside. Paillett told KTVU that he was released after witnesses failed to show up for a preliminary hearing in the case.

Before that, jail records show he was arrested in March on suspicion of burglary and assault. Last year he was in jail four times on charges ranging from assault with a deadly weapon, to robbery to resisting arrest, records show.

And in 2019, San Francisco police shared a picture on Twitter after Paillett allegedly stole a Tesla while on probation and fled police through the city.

KTVU sat down for a jailhouse interview with Paillett. At times he rambled incoherently about voices in his head, including the classical composer Bach, whom he said were telling him what to do.

At the same time, he seemed to clearly understand his predicament and what landed him in jail. He described himself as a spiritual person and believed the voices were divine forces.

He defended going into the woman’s home that night.

"She’s like, ‘Get away from me. Get away from me.’ I was like, ‘I was summoned here. Why do you need me, so I can leave from here?’ Next thing I knew the police were there," Paillett said.

Asked if he was sorry, Paillett said, "I would tell her that if she feels hysterically upset, hurt by me not touching her…from me to you I apologize."

"We carefully reviewed evidence including a lengthy recorded statement that the victim provided to the police shortly after the incident," a spokeswoman for the district attorney’s office said in a statement. "Her statements made clear that she believed that there were mental health issues affecting Mr. Paillett’s entry into her home and that he never tried to hurt her, touch her, or take anything from the home."

The new charges alone are not enough to hold Paillett in jail. The district attorney’s office said it will seek to hold him on a probation violation.

The woman whose home he went into said she hopes Paillett gets appropriate treatment, even if it’s eluded him up to this point.

"Whatever his problem is, whether it’s drugs or a chemical imbalance, whatever the issue is, that’s what needs to be addressed," she said.