CROCKETT, Calif. - Investigators on Wednesday were probing the cause of an explosion and chemical fire at an East Bay fuel storage facility that trapped thousands of people in their homes to avoid potentially unhealthy air.

Local investigators, along the Bureau of Alcohol, Tobacco, and Cal-OSHA are now looking into the fire that shut down the NuStar Energy's Selby Terminal, which according to the company has 24 tanks capable of holding more than 3 million barrels of ethanol and fuels. Cal OSHA spokeswoman Erika Monterroza said the agency ordered NuStar Energy in Crockett to shut down all tanks and pipes involved in Tuesday's fire until state investigators confirm their safety.

Authorities served a search warrant on the facility Wednesday afternoon and say it's a common practice in fire investigations of large magnitude.

The seven-hour blaze at NuStar Energy erupted in towering, stubborn flames Tuesday afternoon at the facility in Crockett, about 30 miles northeast of downtown San Francisco. Oct. 15, 2019

Mary Rose Brown, a spokeswoman for NuStar, confirmed in an email that "all operations are still suspended and all shipments of product" in and out of the facility "have been halted."

NuStar Energy L.P. is a publicly-traded master limited partnership based in San Antonio, Texas. On its company website, it says it is one of the largest independent liquids terminal and pipeline operators in the nation.  In 2011, Cal-OSHA recognized the company, based in Amarillo, Texas, for its "excellence" in voluntary safety and health programs.  Its facility in Kansas was also deemed a "star" site in 2012, OSHA records show.

No injuries were reported but a contractor at the facility had to shelter in a culvert until he could be rescued, fire officials said. At a Wednesday news conference, Contra Costa County Fire Protection District spokesman Steve Hill said a Chevron firefighter with minor heat-related injuries was treated and released. NuStar does not have its own fire brigade, but does has fire equipment on site, a fire official said.

The blaze erupted in towering, stubborn flames Tuesday about 2 p.m. at the facility on San Pablo Dam Road, about 30 miles northeast of downtown San Francisco. The fire was contained about 10 p.m. NuStar is one of several refining and fuel storage facilities in the Carquinez Strait, a major shipping thoroughfare and a key oil hub.

Many had health concerns stemming from the NuStar fuel storage fire in Crockett. Allie Rasmus reports

Thick black smoke that could be seen for miles prompted Contra Costa County public health officials to order people in Crockett, neighboring Rodeo and part of Hercules to stay inside, shut off fans and air conditioners and seal off their windows and doors with tape or wet towels.

The concern was that hazardous particulates might be spewing from the fire. As a precaution, all schools in the John Swett Unified School District were closed on Wednesday. The California Highway Patrol also reopened Interstate 80, which had been closed in both directions near the fire Tuesday.

Both state and local inspectors were looking into the fire that shut down the NuStar Energy's Selby Terminal, which according to the company has 24 tanks capable of holding more than 3 million barrels of fuels. Oct. 15, 2019

The orders, which affected some 12,000 people, were finally lifted later Tuesday night after it was determined that the air levels were safe.

"Please open your doors and windows to air out buildings and homes. You can resume normal activities," said Ellen Dempsey with the county's hazardous materials program.

Video footage of the fire showed flames leading up to an explosion so strong it blew the lid of one of the tanks high into the air.

Investigation into fire at NuStar Energy after fuel tanks explode

Both state and local inspectors were looking into the fire that shut down the NuStar Energy's Selby Terminal, which according to the company has 24 tanks capable of holding more than 3 million barrels of fuels. Sara Zendehnam reports

The fire badly damaged or destroyed two tanks containing about 250,000 gallons of ethanol, a gasoline additive. NuStar's Brown emphasized that the tanks were holding very low volumes of ethanol, less than 1% of tank capacity, or 3,000 barrels each.

About 200 firefighters fought the flames with foam and water, trying to prevent it from spreading to other tanks containing jet fuel and ethanol. They would knock down the flames but they kept reigniting in the spilled fuel.

The fire was finally contained at about 9 p.m., fire officials said. Still, crews worked overnight to stamp out hot spots.

"We feel very confident that we have enough foam agent and enough resources that the hazard or risk of another fire flareup is minimal," said Crockett Fire Chief Dean Colombo.

Fire crews also doused a 14-acre fire that flared in grass next to the tanks.

Officials said they did not immediately know the cause of the fire and whether there was any connection to a 4.5-magnitude earthquake Monday night centered in the East Bay city of Pleasant Hill, north of Oakland.

The NuStar facility is close to Interstate 80, one of the busiest highways in the San Francisco Bay Area, which officials shut down Tuesday afternoon, causing massive backups at the height of evening rush hour. The freeway finally reopened Tuesday night. 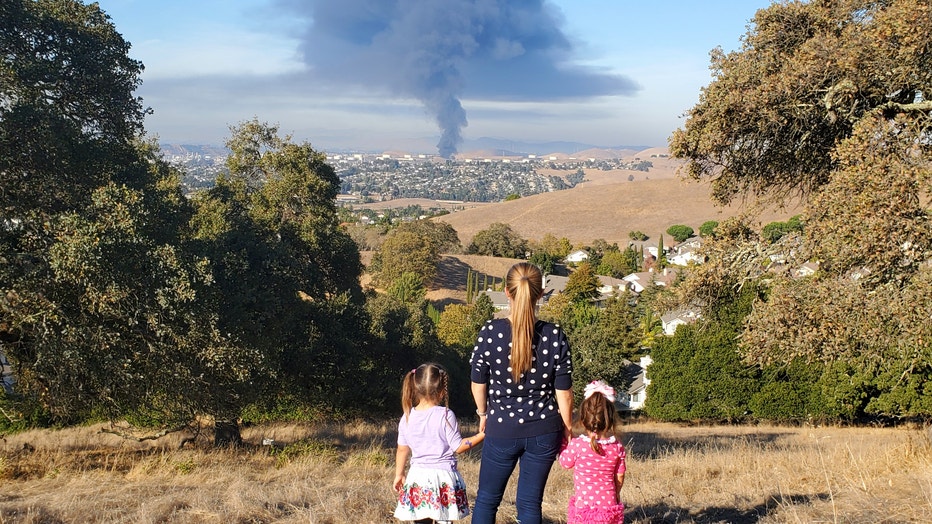 A family stares at the fire spewing from the NuStar Energy Fire. Oct. 15, 2019

Hercules Mayor Dan Romero said that he drove by the flames was dismayed that so many people stopped their cars on the side of Interstate 80 to take video of the fire. "They don't realize there could be an explosion and the chemicals coming off of it," he said.

A resident of Rodeo, Gabriel Iturbe, sat in bumper-to-bumper traffic as he tried to get home to his teenage son, who was home sick when he called his father to report a loud explosion.

"It literally rocked the house and then soon after, he heard what sounded like a jet plane," Iturbe said, speaking from his cellphone in the car as he looked at "thick, black smoke." He said he was trying to reach his son and take him out to a less smoky location.