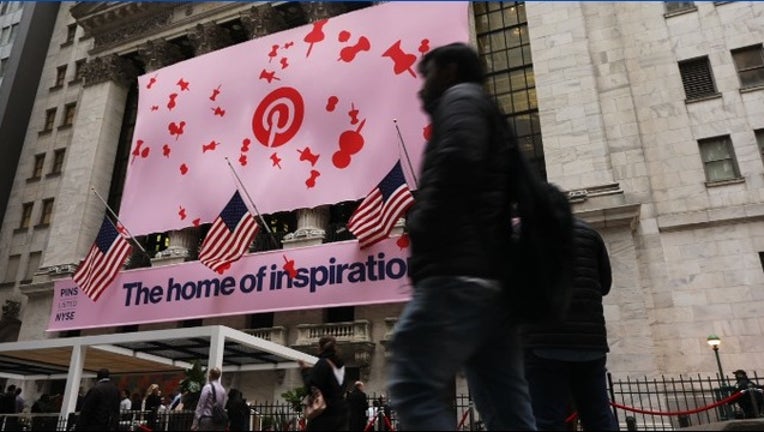 A banner for the online image board Pinterest Inc. hangs from the New York Stock Exchange (NYSE) on the morning that Pinterest Inc. makes its initial public offering on April 18, 2019 in New York City. (Photo by Spencer Platt/Getty Images)

SAN FRANCISCO (AP) - There's some tech jubilance in the air on Wall Street and in Silicon Valley as a pair of newly public companies - Zoom and Pinterest - are seeing their stocks soar on their first trading day.

No one wants talk about a bubble, not to mention its prospects for bursting, but the strong initial performances might reassure investors with jittery nerves following Lyft's disappointing start less than a month ago.

Zoom Video Communications, which makes video conferencing technology people use for work, came out as a dark horse, (or dark unicorn, that is), its shares surging about 81% when it began trading. Pinterest Inc., a much better known company that serves as a digital pinboard for people who want to see wedding, meal-planning, home renovation and other ideas, jumped 25%.

"It shows there is still strong demand in the tech sector," he said.

A strong share surge would be good news for Uber too, which is due to go public in the next few weeks along with other possible tech IPOS from Slack and Palantir.

"There's a lot coming down the pipe," Morgan added.

Other high-profile companies, such as Twitter and Snap, also had strong initial trading days but then saw their stock prices fall substantially in the subsequent months. Just three weeks ago, Uber's smaller ride-hailing rival Lyft also did well on its first trading day before Wall Street pumped the brakes. Lyft is now trading nearly 20% below its initial public offering price.

For all the cautionary tales, there are companies like payment processor Square, which went public at $9 per share, rose 45% on the first day of trading and now sell for around $70.

San Francisco-based Pinterest is on track to raise more than $1.4 billion on its first day of trading. The company has more than 250 million monthly users. Revenue, mainly through advertising, reached $736 million last year and the company posted a loss of $63 million.

Zoom, also based in San Francisco, is poised to raise more than $456 million through the sale of shares and a private placement. The company had $330 million in revenue last year and profit of $7.6 million, making it one of the few profitable technology companies going public this year.