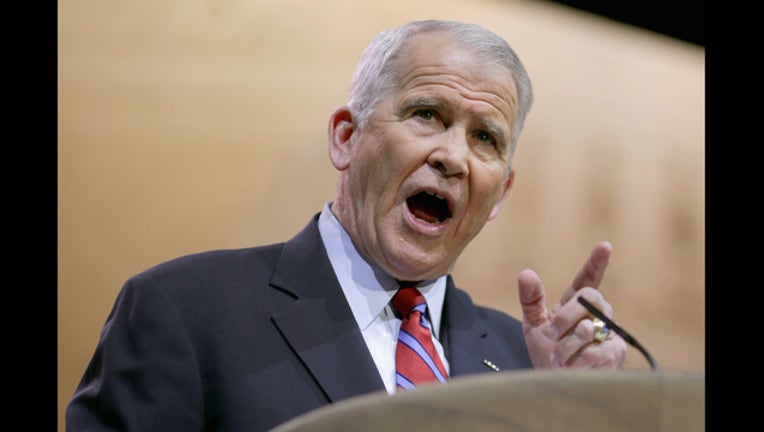 ATLANTA (AP) -- Retired Lt. Col. Oliver North, the gung-ho Marine at the center of the Iran-Contra affair three decades ago, was named president Monday of the National Rifle Association, giving it star power as it faces a powerful backlash over the massacres in Florida and Las Vegas.

North, 74, will be the biggest celebrity to lead the 5-million-member gun lobby since Hollywood leading man Charlton Heston, who famously declared in 2000 that his guns would have to be taken "from my cold, dead hands."

Momentum for gun control has been building since the mass shooting in Las Vegas last fall that killed 58 people and the Feb. 14 rampage at a Parkland, Florida, high school that left 17 dead.

North was picked by the NRA's board of directors, which elects a president every two years, and is expected to assume office within the next several weeks. He succeeds Pete Brownell, who did not seek a second term.

LaPierre remains as vice president and chief executive, running the powerful group's day-to-day operations. North will lead the board, and NRA observers say they anticipate he will take on a more public role in the style of Heston, a fiery presence who used his acting background to energize members.

North was a military aide to the National Security Council during the Reagan administration in the 1980s he emerged into the spotlight for his role in arranging the secret sale of weapons to Iran and the diversion of the proceeds to the anti-communist Contra rebels in Nicaragua.

He was convicted in 1989 of obstructing Congress during its investigation, destroying government documents and accepting an illegal gratuity. Those convictions were overturned in 1991.

With his crisp military bearing and teary-eyed testimony before Congress, North came to be regarded as an earnest American patriot by many on the right, and he went on to run for office, write several books and serve as a commentator on Fox News.

In a statement, North said he was honored to be selected and "eager to hit the ground running."

North's appointment was hailed by gun-rights supporters who consider him a warrior who will vigorously battle efforts to restrict access to firearms. Gun-control advocates called his appointment symptomatic of an NRA tone-deaf and unwilling to seek solutions to gun violence.

"For an organization so concerned with law and order, picking a new leader who admitted that he lied to Congress is a truly remarkable decision," said Avery Gardiner, co-president of the Brady Campaign. The gun lobby "will be led by a man whose own concealed carry permit was revoked because he was `not of good character."'

Robert J. Spitzer, chairman of political science at the State University of New York at Cortland and an expert on guns and the Second Amendment, called North the closest thing the NRA has to a celebrity.

"And maybe they figure they need a more prominent person at the helm, as opposed to the string of relative unknowns who have served in recent years," Spitzer said.

Heston, who died in 2008, served from 1998 to 2003. In 2000, he sought to rally NRA supporters against Democratic presidential candidate Al Gore, warning that Gore was going to "slander you as gun-toting, knuckle-dragging, bloodthirsty maniacs."

It was a time similar to today, an election following a high-profile mass shooting -- the one at Columbine high school in 1999.