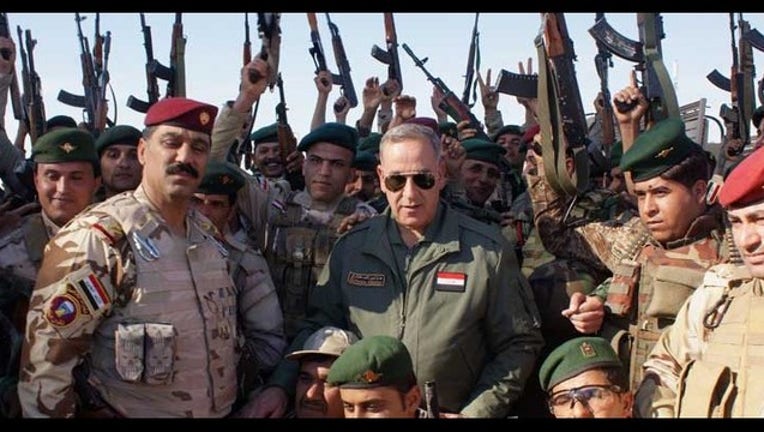 TIKRIT, Iraq (AP) — Iraq declared a "magnificent victory" Wednesday over the Islamic State group in Tikrit, a key step in driving the militants out of their biggest strongholds.

Iraqi Defense Minister Khalid al-Obeidi made the pronouncement, saying security forces have "accomplished their mission" in the monthlong offensive to rid Saddam Hussein's hometown and the broader Salahuddin province of the militant group.

"We have the pleasure, with all our pride, to announce the good news of a magnificent victory," Obeidi said in a video statement. "Here we come to you, Anbar! Here we come to you, Nineveh, and we say it with full resolution, confidence, and persistence," naming other provinces under the sway of the extremists.

Extremists from the Islamic State group seized Tikrit last summer during its advance across northern and western Iraq. The battle for Tikrit is seen as a key step toward eventually driving the militants out of Mosul, Iraq's second-largest city and the provincial capital of Nineveh.

Iraqi forces, including soldiers, police officers, Shiite militias and Sunni tribes, launched a large-scale operation to recapture Tikrit on March 2. Last week, the United States launched airstrikes on the embattled city at the request of the Iraqi government.

Recapturing Tikrit would be the biggest win so far for Baghdad's Shiite-led government. The city is about 130 kilometers (80 miles) north of Baghdad and lies on the road connecting the capital to Mosul. Retaking it will help Iraqi forces have a major supply link for any future operation against Mosul.

Earlier Wednesday, Iraqi security forces fired on snipers and searched homes for remaining militants. Soldiers fanned out in circles from the charred skeletal remains of the Salahuddin provincial government complex, captured the day before.

Militant mortar fire, which had been intense over previous days, fell silent Wednesday, with commanders saying only a few militant snipers remained in the city. They spoke on condition of anonymity to discuss ongoing operations.

"After clearing the area from roadside bombs and car bombs, we will reopen police stations to restore normalcy in the city, and we will form committees to supervise the return of people displaced from their homes," al-Ghabban said. He said the government will help displaced residents return and that a civil defense unit will be combing the city for roadside bombs and car bombs.

"Daesh is completely defeated," he added, using an Arabic name for the group.

During a visit to Tikrit, Iraqi Prime Minsiter Haider al-Abadi said that military engineering units still need more time to clear the city from booby traps. He also waved an Iraqi flag in photos posted on his social media accounts.

"God's willing, there will be a fund to rebuild areas destroyed by Daesh and the war. Tikrit and Salahuddin areas will be covered by this fund," al-Abadi said.

A satellite image of Tikrit, released in February by the United Nations, showed at least 536 buildings in the city have been affected by the fighting. Of those, at least 137 were completely destroyed and 241 were severely damaged. The current offensive also exacerbated previous damage, particularly in the south where clashes have been the most intense in recent days.

Iraq's parliament speaker, Salim al-Jabouri, called on the government to find the means to resettle residents from damaged Tikrit buildings. He said this "requires effort and support by the central government in order to financially support the people in rebuilding their houses."

Aziz Jaber, a political science professor at Baghdad's Mustansiriyah University, said retaking Tikrit could be seen as the "beginning of the end" for the Islamic State group in Iraq.

"Daesh was very talented in psychological warfare, but not any more after its defeat in Tikrit," he said. "Now, the morale of the Iraqi forces is high, while that of Daesh is low."

Meanwhile, the U.N. mission to Iraq said Wednesday that violence claimed the lives of at least 997 people in March, a slight drop from the February death toll.

UNAMI said in a statement that among them were 729 civilians while the rest were security forces. It said at least 2,172 people were wounded, including 1,785 civilians.

The new U.N. envoy to Iraq, Jan Kubis, said he is shocked to see that Iraqis continue to "bear the brunt" of the ongoing violence in the country.

Kubis also said Wednesday that the offensive in Tikrit is "a victory for all the Iraqi people," and that the U.N. was ready to assist the provincial and national authorities.