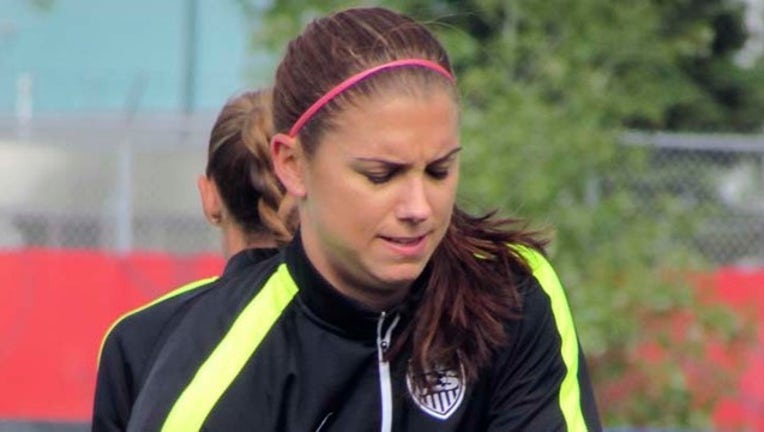 WINNIPEG, Manitoba (AP) — Heather O'Reilly guesses she was about 14 when the United States last won a World Cup.

She remembers going to a match in New Jersey and seeing her heroes play in person, then gathering in front of the TV with her family to watch the dramatic final at the Rose Bowl. The United States defeated China on penalty kicks, prompting Brandi Chastain to famously doff her jersey in celebration.

"I was a big dreamer as a kid," she said. "I was at Giants Stadium and I got teary-eyed when the women marched out to the national anthem. And I did say to myself, 'I want to be there some day. I want to be like Mia Hamm one day.'"

Now the veteran midfielder is about to play in her third World Cup. She'd like nothing more than to help the United States claim its third championship, and first since that sunny day in Southern California 16 years ago.

The United States kicks off the tournament on Monday with a match against Australia at Winnipeg Stadium. The Americans have competed at every World Cup since the women's tournament started in 1991.

The last time, in 2011 in Germany, the United States advanced to the final but fell to Japan on penalty kicks.

"We were in the finals, and that's a lot to be proud of, but we feel like there's still a lot of unfinished business. Christie Rampone is the only one of us who has a World Cup championship under her belt. So there's a lot of eager and determined women here that want to bring this home."

In addition to the Australians, the U.S. team is part of a difficult group that includes Sweden and Nigeria. Those two teams open group play in the early match on Monday at Winnipeg Stadium.

An expanded field of 24 teams is competing in the monthlong tournament being played in six Canadian cities. It concludes on July 5 with the championship match in Vancouver, British Columbia.

The event is being played as a scandal rocks soccer's international governing body. FIFA President Sepp Blatter announced his resignation last week after the U.S. Department of Justice indicted 14 people on corruption charges related to soccer.

WALTZING WITH THE MATILDAS: Australia hasn't managed to beat the United States in 25 previous meetings. Co-captain Lisa De Vanna would like to see that streak end on Monday. The match is significant for De Vanna because it's her 100th international appearance.

"Every game I play for the Matildas I wear my heart on my sleeve and to finally make it to 100, it's a big milestone," said De Vanna. "It's hard to focus on that when you've got such a big game but it's a great honor and to be co-captain of this team just caps it off."

The Matildas are making their sixth World Cup appearance. Their best finish was sixth place in 2007.

"It was an emotional moment for this team because we've worked bloody hard, you know? This team has worked hard, they've sacrificed a lot," he said. "It was always going to end the right way with Sinclair scoring in the opening game.

Look, we know China was going to be tough, we knew what they were going to do to us, we knew it was going to be frustrating," he added. "And when the call came, I celebrated like we just scored. Because I knew there was only one woman that was going to step up in the 90th minute and write the script, like she always does."

SUNDAY RECAP: Isabell Herlovsen scored twice in Norway's 4-0 victory over Thailand in Group B's opening match in Ottawa. The Thai women are the lowest-ranked team (No. 67) to make it into the field.

Top-ranked and two-time World Cup champion Germany smashed Ivory Coast 10-0 on hat tricks by both Celia Sasic and Anja Mittag. It was the second-most lopsided win in World Cup history.