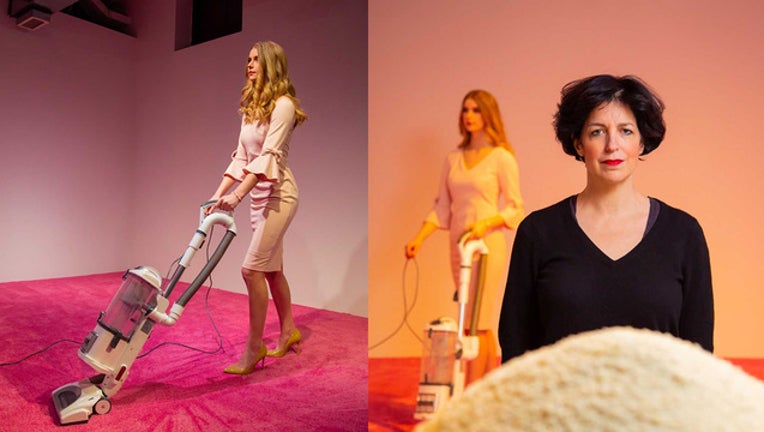 WASHINGTON - Ivanka Trump and her brothers are responding to a new art exhibit at CulturalDC that portrays the presidential daughter vacuuming crumbs.

Ivanka Trump says in a tweet about the "Ivanka Vacuuming" installation: "Women can choose to knock each other down or build each other up. I choose the latter."

Her brother, Donald Trump Jr. tweeted, it's "Sad, but not surprising to watch self professed 'feminists' launching sexist attacks against @IvankaTrump. In their crazed world, sexism is OK if hurts their political enemies."

Eric Trump claimed on Fox his sister is a "powerful woman who has done more for women than probably anybody in Washington D.C."

The art piece by Jennifer Rubell invites the public to "throw crumbs onto the carpet, watching as Ivanka elegantly vacuums up the mess, her smile never wavering."

According to the art gallery, "The exhibit includes a pedestal of breadcrumbs (not trash or garbage) that attendees have the choice to throw onto the carpet as the Ivanka lookalike is vacuuming (it is not being thrown at the model herself."

“CulturalDC is not only making space for art, we’re making that space accessible and engaging for participants. Ivanka Vacuuming is relevant beyond its content because it breaks down perceived and real barriers between the artist and audience. These participatory exhibits are a nice contrast to the town’s ‘please-do-not-touch’ mainstay museums.”

The exhibit runs through February 17 and will be livestreamed on culturaldc.org/ivanka-vacuuming from 6 p.m. to 8 p.m. Eastern Standard Time.