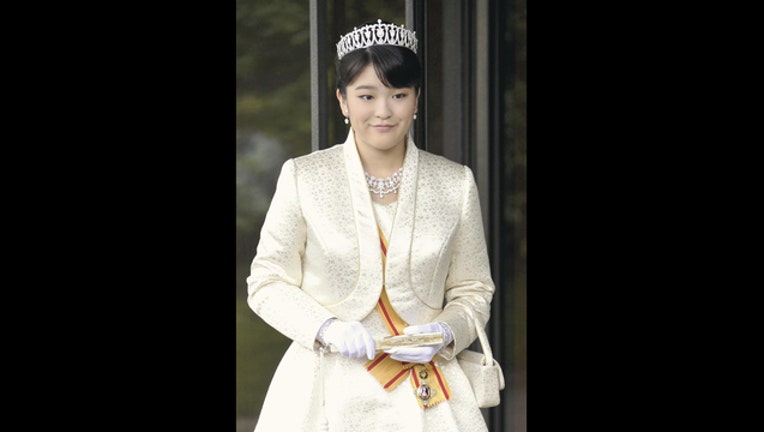 Princess Mako, the elder daughter of Prince Akishino and Princess Kiko, attends her 20-year-old birthday ceremony at the Imperial Palace on Oct. 23, 2011. According to Imperial Household Agency, Princess will announce her engagement to University fri

TOKYO (AP) - Princess Mako, the granddaughter of Japan's emperor, will marry an ocean-loving legal assistant who can ski, play the violin and cook.

Japanese nuptials tend to be highly ritualized, especially for a royal family member, and the buildup to the wedding is likely to take time. A public announcement would come first, then a wedding date would be set and then the couple will make a formal report to the emperor and empress.

Quasi-public NHK TV reported the news late Tuesday and the Imperial Household Agency confirmed the report to Japanese media who belong to an exclusive "press club" system. But the agency declined comment to The Associated Press.

The man who won the princess' heart spoke to reporters Wednesday, and his comments dominated national TV coverage though he gave few details.

Kei Komuro said he works as a legal assistant and had just spoken over the phone with Mako, who had been a fellow student at International Christian University in Tokyo.

"When the right time comes, I'd like to talk about it," he told reporters, bowing repeatedly, wearing a suit and tie.

The couple, who are both 25, met at a restaurant in Tokyo's Shibuya about five years ago at a party to talk about studying abroad, and they have been dating several times a month recently, NHK said.

Komuro was once tapped as "Prince of the Sea" to promote tourism to the beaches of Shonan in Kanagawa prefecture, a facet of his profile highlighted by local media.

Women can't succeed to the Chrysanthemum Throne. Mako's father and her younger brother are in line to succeed Emperor Akihito, but after her uncle Crown Prince Naruhito, who is first in line.

Once she marries, Mako will no longer be a princess and will become a commoner.

NHK said Mako has already introduced Komuro to her parents, and they approve. A formal announcement could come as soon as next month, Japanese media said.

Unlike royalty in Great Britain and other European countries, the emperor and his family tend to be cloistered, although they travel abroad and appear at cultural events.

Akihito, 83, is the son of Hirohito, Japan's emperor during World War II.

Akihito expressed his desire to abdicate last year, and Japan has been preparing legislation especially for him so he can.

Until Japan's defeat at the end of World War II, Hirohito was viewed as divine, and no one had even heard his voice. But the times are changing, and the Japanese public harbors a feeling of openness and familiarity toward the emperor and his family. People are likely to see Mako's marriage as a celebration, although the rituals will continue to be tightly orchestrated.

Her work can be found at https://www.apnews.com/search/yuri%20kageyama

This story has been corrected to show the princess's name is Mako.