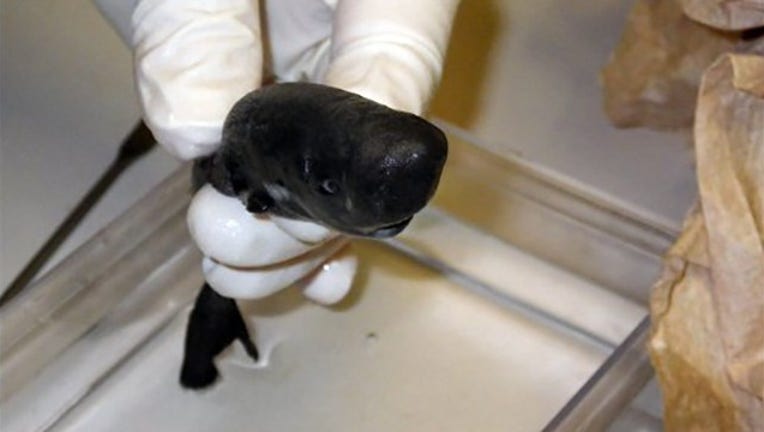 WASHINGTON (AP) — Think Jaws meets a kangaroo, with maybe a touch of cute kitten, and you've got the aptly named pocket shark — the newest and rarest species found off the U.S. coast.

Surprised scientists found a tiny, young version of the extraordinarily rare shark that was fished out of the deep Gulf of Mexico in 2010 with lots of other creatures in a government research trip. The dead specimen spent more than three years in a giant freezer waiting to be identified.

It turned out to be only the second of its species ever seen. The first pocket shark was found 36 years ago in the Pacific Ocean off the coast of Peru and it's been sitting in a Russian museum since.

This pocket shark was a male, maybe a few weeks old, about 5.5 inches long. Strangely, this type of shark has two pockets next to its front fins; their purpose is not known. It's not quite like a kangaroo, which uses its pouch to carry young, but few species have pockets this large — about 4 percent of the shark's body.

"It's cute," said Tulane University biologist Michael Doosey, who co-authored a study in a zoological journal identifying the shark. "It almost looks like a little whale."

National Oceanic and Atmospheric Administration fisheries biologist Mark Grace has spent more than 30 years going through bags upon bags of fish to identify them. It took him more than three years to get to near the end of the freezer, when he plopped a bag on the table and let it thaw.

"I wasn't really sure what it was," Grace said. "That pocket over on the pectoral fin, I had never seen anything like that on a shark."

It's a small miracle that he was not thrown away. A couple of times, the lab with the freezer lost power.

Once identified, the shark was shipped to New York and France for high-tech examinations that wouldn't puncture the specimen.

The shark also has unusual belly patches not seen in most sharks. The only other pocket shark was a female adult about 17 inches long; it is believed that adult females may be larger than males.

But the truly strange thing about this species strange is its twin pockets. While no one knows what they are for, based on the Russian specimen Grace and Doosey speculated that they may secrete some kind of glowing fluid or pheromones.

The Gulf specimen has umbilical scars, showing he's probably a few weeks old, Grace said. Because of that they think he was born in the Gulf. He was captured in February 2010 by the ship Pisces about 190 miles off the Louisiana coast.

"There's others" out there, Grace said. "We just haven't caught them yet."