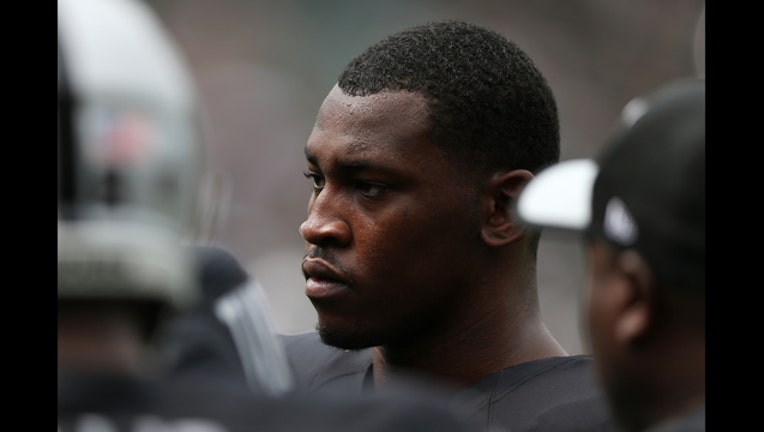 SAN FRANCISCO (BCN) - Former NFL football player Aldon Smith, who is accused of domestic violence, was arraigned in a San Francisco courtroom today for allegedly violating a restraining order that prohibited him from contacting the victim in that case.

In addition, Moody warned Smith to comply with the protective order and refrain from contacting the victim in the domestic violence case and to stay away from the Nob Hill apartment building where the alleged incident occurred.

Smith failed to show up to his arraignment last week for three misdemeanor counts of violating a protective order and Moody issued a $500,000 warrant for his arrest at the time. The warrant, however, was stayed until today and would only have gone into effect if he failed to show up to court once more.

The restraining order was issued by Moody on March 12, when Smith was arraigned for domestic violence, false imprisonment, vandalism and assault charges in connection with the alleged domestic violence incident on March 3 in the 600 block of Bush Street. Smith has pleaded not guilty to those charges.

In that case, officers responded around 8:30 p.m. to the apartment for a report of domestic violence allegedly involving Smith. By the time officers arrived, Smith had left the scene.

The victim suffered injuries not considered life-threatening, according to police.

Smith turned himself in three days later after police obtained an arrest warrant for him, police said.

Late last month, investigators with the Police Department's Special Victims Unit learned that Smith allegedly violated the order and they once again obtained a warrant for his arrest, police said. Smith turned himself in on those charges on March 23 and was released on $30,000 bail.

In the days following the original March 3 domestic violence case, the Oakland Raiders released him from his contract with them.

Smith played for the San Francisco 49ers starting in 2011 but was released by the team in August 2015 following an arrest for a DUI hit-and-run in Santa Clara.

Smith is set to appear in court again on Wednesday.