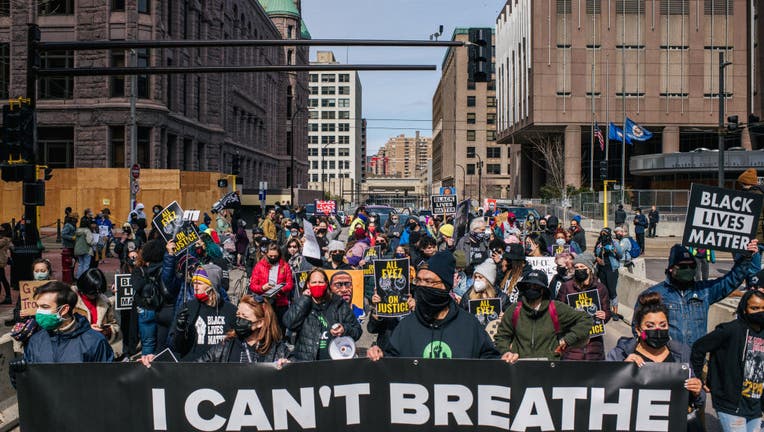 MINNEAPOLIS, MN - MARCH 28: Demonstrators prepare to march during a rally in front of the Hennepin County Government Center on March 28, 2021 in Minneapolis, Minnesota. Community members continue demonstrations ahead of opening statements in the tria

MINNEAPOLIS - One prospective juror's voice quivered as she told attorneys during jury selection that she feared for her family's safety if chosen for the panel that will decide the fate of a white former police officer charged with killing George Floyd. When the judge excused her, the woman exhaled in relief.

Jurors at all trials feel pressure, knowing their decisions will alter lives. But the weight on jurors in Minneapolis is in a whole different category as they'll be asked whether to assign guilt in the death of a Black man that prompted some of the largest protests in U.S. history.

Bystander video of the confrontation is expected to be a key exhibit at trial, with opening statements set for Monday. It shows Derek Chauvin using his knee to pin Floyd's neck to the ground for about nine minutes during an arrest last May. Floyd cried he couldn’t breathe and called for his mother before his body went limp.

A looming question is whether Chauvin, charged with murder and manslaughter, can get a fair trial with so much pressure on jurors and with some potentially fearing the consequences to the city and country should they reach a verdict others oppose.

A high fence installed around the courthouse for the trial is a daily reminder for jurors of security concerns. On some days, protesters gathered just beyond it, holding signs that read, "Convict Derek Chauvin" and "The World Is Watching."

Jurors are well aware that Floyd’s death led to months of protests in Minneapolis and cities nationwide. They’re aware, too, that thieves took advantage of demonstrations to break into, ransack and sometimes burn down stores.

A judge denied a request to change the trial’s venue, a ruling Chauvin could cite on appeal if convicted. Appeals with change-of-venue disputes at their core are rare but not unprecedented.

A U.S. appeals court in 1999 vacated white Detroit police officer Larry Nevers' conviction in the beating death of a Black motorist, even though evidence against him seemed strong. The court noted how at least one juror heard that the National Guard was on standby in case Nevers was acquitted and violence ensued.

"The Court cannot imagine a more prejudicial extraneous influence than that of a juror discovering that the City he or she resides in is bracing for a riot," it said. It added that letting the conviction stand would send the wrong message that rights to an impartial jury "do not extend to an obviously guilty defendant."

Similarly, an appeals court in Florida tossed the conviction and ordered a new trial for a plain-clothed Hispanic officer, William Lozano, who fatally shot Black motorcyclist Clement Lloyd in 1989 as Lloyd sought to elude a patrol car trying to stop him for a traffic violation. A passenger on the motorcycle, Allan Blanchard, who was also Black, died in the resulting crash. Protests erupted in Miami.

At the 1991 trial in Miami, jurors found Lozano guilty of manslaughter. The appellate ruling months later that overturned the conviction highlighted how some jurors admitted they feared an acquittal would renew protests.

"We simply cannot approve," the court said, "the result of a trial conducted … in an atmosphere in which the entire community — including the jury — was so obviously (and) justifiably concerned with the dangers which would follow an acquittal."

At his 1993 retrial in Orlando, more than 200 miles from Miami, Lozano was acquitted.

Numerous people expressed unease about serving on the panel for Chauvin's trial during the more than two weeks of jury selection. At least one who became teary-eyed was excused, as were others who were visibly unnerved.

Others displayed no such apprehension. A Black man in his 30s who was ultimately put on the jury wrote on a questionnaire that the Chauvin trial was the biggest case of his lifetime. And he added: "I would love to be a part of it."

Other police-related trials in which race may have played a role tested courts' ability to reach fair verdicts amid intense public pressure.

The 2018 trial of white Chicago police officer Jason Van Dyke in the fatal shooting of Black teenager Laquan McDonald was not moved out of Chicago and ended with guilty verdicts on second-degree murder and aggravated battery.

The 1992 trial of Los Angeles officers charged in the brutal beating of Black motorist Rodney King produced a far more contentious outcome. After months of political wrangling, it was moved to a suburb where a nearly all-white jury acquitted the officers, setting off riots in Los Angeles.

Critics said the venue change didn't solve issues of impartiality and only resulted in a jury partial to the officers, deepening cynicism by some that justice can ever be fair when the victims are Black.

All the Chauvin jurors were asked before being impaneled if they could set aside outside influences and decide the case only on evidence presented at trial. They all assured the court that they could.

Alan Tuerkheimer, a Chicago-based jury consultant, said he believed the Chauvin jurors would become increasingly calm as the trial proceeds and would be able to block out the hubbub.

"The norm is jurors taking these things very seriously," he said.

If the Chauvin jury faced an either-or decision on a single murder charge, that would have ratcheted up the pressure on jurors even further, said Steve Greenberg, a leading criminal attorney in Chicago who has tried over 50 murder cases. He said a release valve for them in deliberations is that they can opt to convict on lesser but still-serious charges.

"There is wiggle room that will allow all of them to feel good about their decision at the end of the day," he said.