Denise Smart told jurors on Thursday that the last time she heard her daughter's voice she mentioned she was having a tough time as a student at that university in San Luis Obispo.

One of Kristin Smart’s friends from college testified on Monday about the night the 19-year-old disappeared more than two decades ago, according to reports from inside the courtroom.

Margarita Campos and Kristin Smart grew close in 1996 while they were students at California Polytechnic State University in San Luis Obispo. They were among a group of women who had attended an off-campus party on May 24, 1996 – hours before Smart was last seen – but Campos ended the night earlier than Smart, according to tweets from an account for the "Your Own Backyard" podcast. Representatives from the podcast, which has been credited with reviving interest in the case, were seated inside the courtroom for the day's proceedings.

The trial is expected to last four months. Separate juries were selected from a pool of more than 1,500 Monterey County residents to oversee each case. The proceedings are not televised or live-streamed.

Friday’s proceedings included testimony from Vanessa Shields, a fellow Cal Poly student who lived on the same dormitory floor as Smart and often spent time with her.

Shields told the jury that she spotted Paul Flores "staring intently" at Smart for minutes during a party weeks before Smart went missing, according to the tweets.

She described feeling "very uncomfortable" and "unsettled." She reportedly said she had seen Flores doing so at previous parties, but that Smart was not interested.

"He was creepy. Socially awkward," Shields reportedly told the jury. "Always alone. We all have a type, and he wasn’t Kristin’s type."

Flores is accused of killing Smart while both were freshman at California Polytechnic State University’s San Luis Obispo campus in 1996. Prosecutors have said Flores killed Smart on May 25, 1996, though her remains have never been recovered.

Campos and Smart had started the night in Campos’ dorm room before going to the party, where they each had a can of Budweiser, according to the tweets. A few hours later, the women and their friends hopped in a cab, which dropped off the other women before Smart and Campos kept going.

But Campos said she "was tired" and decided to end the night earlier than Smart had wanted. The women then parted ways in the parking lot of a housing complex, with Campos giving Smart the key to her dorm, according to the tweet thread.

"Kristin wanted to walk by some houses to see if there (sic) any parties," Campos reportedly told the juries. "I just was over it."

Campos further described how Smart was upset with Campos because she didn’t want to stay out.

She described how her friend seemed sober and hadn’t had any beer in "at least three hours." Smart is believed to have walked from there.

The girls had planned to study that following day.

"Kristin never came and knocked on my door," Campos recalled.

Earlier in the day on Monday, the jury heard from Smart’s younger sister, Lindsey Smart Stewart, who described how her sister "would always light up when she saw me," according to the podcast’s Twitter account.

Flores, now 45, is charged with murder in connection with Smart's presumed death. His now-81-year-old father, Ruben Flores, is charged with helping his son bury Smart’s remains. He allegedly later unearthed and relocated the remains.

Paul was allegedly the last person seen with Smart, who was said to have been intoxicated after they and others had attended an off-campus frat party over the Memorial Day weekend. 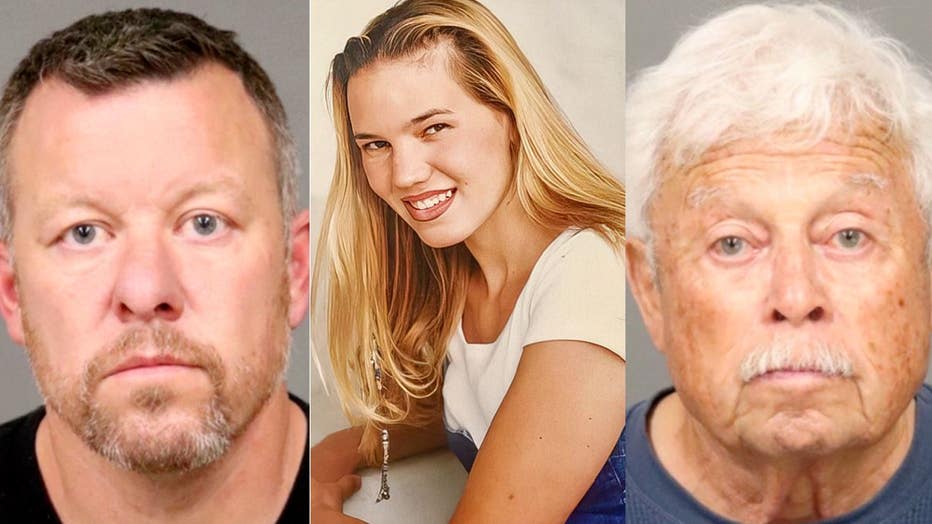 The state has said Paul Flores killed Smart in his dorm room while he tried to rape her when they were both freshmen. A massive search ensued.

"And while the entire community banded together to search for Kristin desperately, Paul and Ruben Flores did not join in," Deputy District Attorney Christopher Peuvrelle told the jury in his opening statements. "You will hear Ruben Flores would tear down missing posters of Kristin — tore down her smiling, beautiful face — called her a ‘dirty slut,’ all while her corpse was decomposing underneath his deck."

Later on Friday, the jury heard from college student Kendra Koed, who did not attend Cal Poly, but was at the same party as Smart on the night that she was last seen, according to the tweets.

Koed recalled that Paul Flores said he could give her a piece of gum when, "At some point, he started kissing me." The kiss was allegedly not consensual, and she said she pushed Flores away when someone shouted for them to, "Get a room."

Flores and Koed then allegedly left the house and were in the yard when she said he advanced on her again. She pushed him off and returned to the party, according to the tweets.

Once inside, Koed said she saw "an extremely tall girl," whom she ultimately determined was Kristin Smart. She recalled seeing Smart fall in a hallway of the house and spotted Flores standing above her. Koed then took Smart to sit outside, where she said Smart "did not seem sober."

She noted that she did not see Smart drinking alcohol.

"She did not seem able to sit on her own," Koed reportedly said. "She was unstable. She just seemed like she needed a friend."

Koed allegedly told Smart to "stay away from that guy," meaning Flores. She later saw Smart lying near the home’s driveway, according to the report. She asked Smart if she had a ride home, and Smart reportedly told her she did.

Under questioning from the defense, Koed said she and her friends had added rum to 7-Eleven Slurpees before the party that night, according to the tweets.