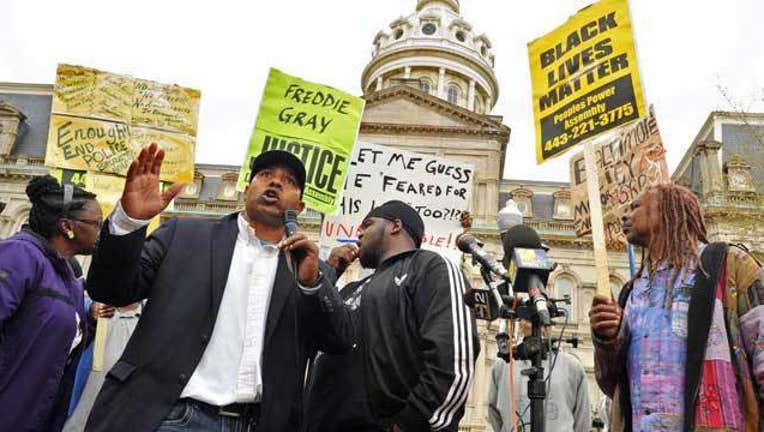 BALTIMORE (AP) — The Justice Department said Tuesday it has opened a civil rights investigation into the death of Freddie Gray, a black man who suffered a fatal spinal-cord injury under mysterious circumstances after he was handcuffed and put in the back of a police van.

About an hour after the probe was announced, hundreds of people gathered a previously planned rally at the site of Gray's arrest. The protesters marched to a police station a couple of blocks away, chanting and holding signs that read "Black Lives Matter" and "No Justice, No Peace" — slogans that have come embody what demonstrators believe is widespread mistreatment of blacks by police.

Pricilla Jackson carried a sign reading, "Convict Freddie's killers," that listed the names of the six officers suspended with pay while local authorities and the U.S. Justice Department investigate the death. Jackson said she wants Mayor Stephanie Rawlings-Blake to know that she and others have been brutalized by police.

"They're hurting us when they throw us to the ground and kick us and punch us," said Jackson, 53.

Gray, 25, was taken into custody April 12 after police "made eye contact" with him and another man in an area known for drug activity and the two started running, Baltimore police said. Gray was handcuffed and put in a transport van. At some point during his roughly 30-minute ride, the van was stopped and Gray's legs were shackled when an officer felt he was becoming "irate," police said.

Police Commissioner Anthony Batts said that Gray asked for an inhaler, and then several times asked for medical care. He was eventually rushed by ambulance to a hospital.

Gray died Sunday — a week after his arrest — of what Deputy Police Commissioner Jerry Rodriguez described as "a significant spinal injury."

Exactly how he was injured and what happened in the van is still not known.

It's not uncommon for federal investigators to look into allegations of excessive police force. Justice Department investigations in the last year include probes into the fatal shooting of an unarmed black 18-year-old in Ferguson, Missouri — a case that resulted in no charges against the officer — and an ongoing review of a police chokehold death of a New York City man.

There's a high threshold for bringing federal civil rights charges against police officers in such cases. Federal investigators must show an officer willfully deprived a person of his or her civil rights by using more force than the law allows, a standard that's challenging in rapidly unfolding confrontations in which snap judgments are made.

According to court documents, Officer Garrett Miller accused Gray of carrying a switchblade, which was discovered in Gray's pocket after he was stopped.

The lawyer for Gray's family said he believes the police had no reason to stop him.

"They've made concessions on lack of probable cause," attorney Billy Murphy said. "Running while black is not probable cause. Felony running doesn't exist, and you can't arrest someone for looking you in the eye."

The suspended officers were identified as:

— Officers William Porter and Edward Nero, who along with Miller, all joined in 2012.

Kim Deachilla, a spokeswoman for the Baltimore Fraternal Order of Police Lodge 3, said a law firm that contracts with the union is representing them.

The officers' specific roles in the arrest were not released by city officials. Bystander video of the arrest shows officers on bicycles, in patrol cars and outside the transport van.

Batts said the reason for Gray's stop is "a question we have to dig into."

Gray's death has prompted daily protests and a vigil was planned Tuesday evening at the spot where he was arrested. About 100 people had gathered around the start of the rally.

Harold Perry, 73, a retired small businessman who is nearly blind, said he heard the arrest through his bedroom window. A young man was screaming "You're hurting me! Get your knee off my back," Perry said.

He said he also heard the young man say, "I'm an asthmatic."

In the bystander video, Gray is screaming, but it's not clear what he is saying.

At a news conference Monday, officials vowed transparency and pledged to hold those found responsible accountable. Batts said the investigation will be completed by May 1 and the results will be sent to the state attorney's office to determine whether criminal charges will be filed. Batts also said he is ordering that police review and rewrite "effective immediately" its policies on moving prisoners and providing them with medical attention.