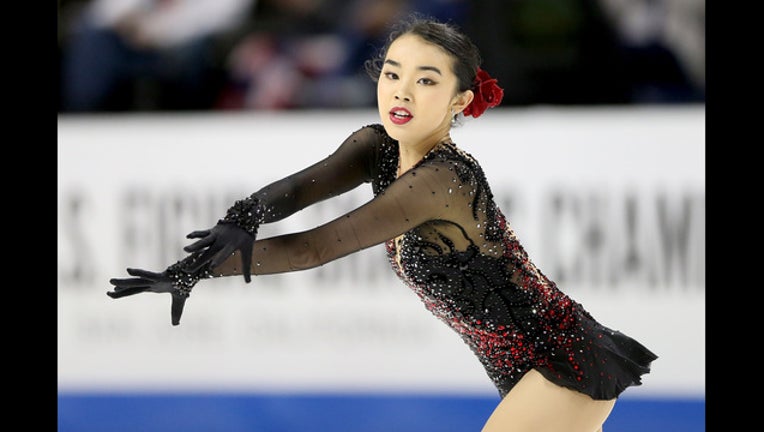 Karen Chen competes in the Ladies Free Skate during the 2018 Prudential U.S. Figure Skating Championships at the SAP Center on January 5, 2018 in San Jose, California. (Photo by Matthew Stockman/Getty Images)

SAN JOSE, Calif. (AP) - Bradie Tennell, Mirai Nagasu and Karen Chen, the top three finishers at the national championships, were selected Saturday to the U.S. team for the Pyeongchang Olympics.

Three-time U.S. champ Ashley Wagner, who complained vigorously about the marks after the free skate, was not included. Four years ago, Wagner also finished fourth but was placed on the team ahead of Nagasu. Wagner wound up with a bronze medal in the team event.

"I really took time to remodel myself, because I didn't want to feel that regret," Nagasu said during the announcement on NBC's "Today" show.  "This has been about my journey and my goal to get here. To accomplish it last night has been a dream come true."

Alternates are Wagner (first alternate), Mariah Bell (second alternate) and Angela Wang (third alternate). Only Wagner has been to an Olympics among those three.

U.S. Figure Skating uses a committee to decide the squad, and it went with the results of Friday night. Past performances and a variety of other data are included in the decision making.

The remainder of the team -- three men, three ice dance couples and one pair -- is scheduled to be announced Sunday.

Rising star Tennell's near-perfect free skate earned her first national crown. Tennell, a long shot entering the season, was spotless in the short program two days ago, then as the final skater in the long program she didn't miss a trick under tremendous pressure. Her top competitors, Nagasu and Chen, already had put down superb routines.

"I just had to keep calm and focus on what I knew I could do," Tennell said. "There's the initial butterflies, but I kind of start to lose myself and keep going.

"I don't think it's sunk in quite yet. I'm still kind of shocked. It's indescribable to me."

Nagasu, U.S. champ 10 years ago and a 2010 Olympian, capped a sensationally sweet comeback with a flowing performance to finish second, assuring a spot in next month's Olympics -- a berth she was denied in 2014 by the selection committee. That position for Sochi was given to Wagner, who had a better overall record.

After overpowering the entry and two-footing the triple axel that no other American woman tries, Nagasu hit six triple jumps, including a loop in the final seconds of a stirring program. She was so moved by her performance that she broke out in tears and covered her face, trying to gain control of the emotions that often had betrayed her in critical moments.

She was still crying in, appropriately, the kiss and cry area when the marks showed Nagasu she had shattered her personal best by nearly 20 points with a 213.84.

Chen's big season last year had not translated into achievement this campaign. She put those struggles to an icy death with a superb showing that had one flaw toward the end. She, too, was overcome by tears for a 198.59 score.

Tennell made it a trio of tears with her career best of 219.51.  Tennell announced herself as an Olympic team threat with a third place at Skate America. Hardly ice shattering, but then she ratcheted up everything for nationals.

Wagner had the crowd going for most of her energetic routine, but a flawed lutz as her final jump was costly. She responded to the fans with a deep bow when she finished, yet was shaking her head "no" when her marks were posted.

Hours later, after she verbally campaigned to be placed on the Olympic team again, Wagner was left off.