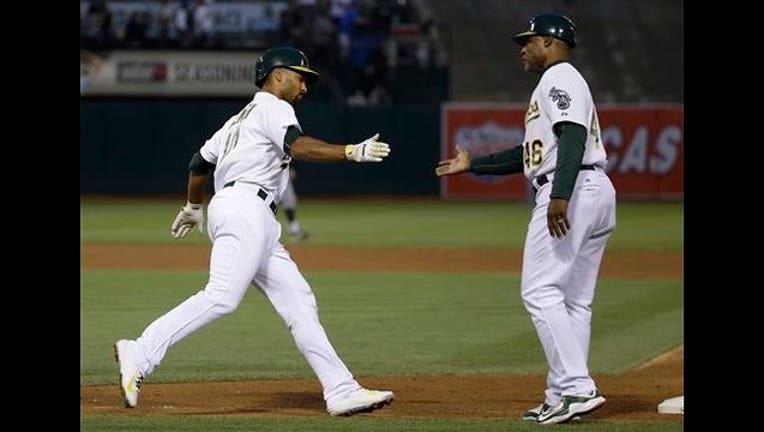 Josh Phegley had a two-run single and Mark Canha added an RBI triple for the A's, who ended a five-game losing streak against the Mariners.

Kazmir (5-5) retired 21 of his first 22 batters, allowing only a one-out double to Franklin Gutierrez on a 1-2 pitch in the fifth. Gutierrez also singled leading off the eighth but was erased on a double play.

A possible trade deadline target this month, Kazmir struck out seven and hit a batter while improving to 5-0 in seven starts against the AL West this season. Edward Mujica finished the two-hitter.

Seattle was coming off consecutive shutouts against San Diego and took an 18-inning scoreless streak into the series opener against Oakland.

Semien's seventh homer, a two-out solo shot in the fifth, made it 3-0. It ended a career-high 45-game homerless stretch for the shortstop.

It was more than enough support for Kazmir, who turned in one of his most dominant performances this season. He needed only 31 pitches to record the first nine outs, struck out each of Seattle's first four hitters at least once and fanned slugger Nelson Cruz twice.

Elias gave up three hits in six innings. He struck out seven and walked one.

Mariners: SS Chris Taylor was called up from Triple-A Tacoma and placed in the starting lineup. Taylor batted ninth and went 0 for 2. ... INF Willie Bloomquist was designated for assignment. Bloomquist played in 35 games and was hitting just .159 with four RBIs.

Athletics: RHP Sonny Gray rejoined the ballclub after being hospitalized for two days while being treated for salmonella. The team has still not determined when Gray will make his next start. ... Oakland acquired reliever Cody Martin from the Atlanta Braves in exchange for international slot money. Martin was assigned to Triple-A Nashville. To make room on the 40-man roster, 1B Nate Freiman was designated for assignment.

Mariners: LHP J.A. Happ (3-5) gets the ball on Friday night in the second game of the four-game series. He is winless in his previous four starts but hasn't gotten much run support. Seattle has scored only nine runs over Happ's last six appearances.

Athletics: RHP Jesse Chavez (4-7) gets the start for Oakland. He has a 1.98 ERA when pitching on four days' rest this season. It is the third-lowest mark in the AL.