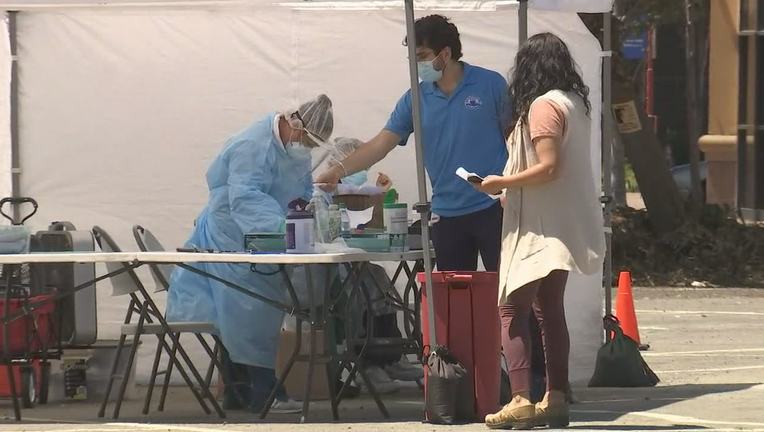 The Latino community in Oakland's Fruitvale district have been disproportionately affected by coronavirus.

OAKLAND, Calif. - A UCSF study conducted in Oakland's Fruitvale neighborhood revealed that the Latino community has a higher Covid positivity rate than the rest of the state which leaders noted is sad but not surprising.

The results of the study, conducted in late September among 1,172 people, found that antibody-positive prevalence is 9.8% overall among people who live and work in Fruitvale, a predominantly Latino neighborhood. That number increased to 11.9% among Latino adults and children.

And among the Latin Mam, or Mayan, speaking community, the number spiked to 26.8%, USCF researchers noted in their results made public on Wednesday. The appearance of the COVID-antibody test shows that someone once had coronavirus.

To compare, the prevalence of the COVID antibody in non-Latinos was 0.5% and that number increased to 5.2% among Latino adults and children and 8.1% among adults who identified as Mayan Latinx. As of Oct. 9, the 94601 zip code, which includes Fruitvale, has the highest number of positive cases in all of Alameda County.

Aside from COVID results, the study also found that more than 25% of Latinos saw a reduction in income; 15% of Latinos lost their jobs as a result of the pandemic and 42% said they faced food insecurity. A total of 61% of Mam community members said they are food insecure.

“It is not new that we are the underserved and one of the most vulnerable groups in the area,” said Rosendo Aguilar, Fruitvale community member and Mam speaker.

According to Alicia Fernández, professor of medicine and director of the UCSF Latinx Center of Excellence, the findings reveal the urgent need for more testing, financial help, food to eat and public health outreach.

Her sentiments were echoed by Chris Iglesias, CEO of The Unity Council.

"The data collected by the study confirms the reality that we see in the Fruitvale community," he said. "The numbers confirm that the needs continue to go up, and low-income Latinx folks, especially Mam speakers, are more vulnerable to the pandemic's effects than any other communities in Alameda County. We need the county, city, and our philanthropic partners to step up and support our community to stay afloat. No one should have to worry about where they are going to sleep or get their next meal in the most prosperous region of the United States."

Jane García, CEO of La Clínica de La Raza, said that the study allows doctors, organizers and politicians to have a better sense of how to move forward.

The testing was done in collaboration with UCSF, La Clínica, The Unity Council, and other community organizations based in the Fruitvale District.

That study found that infection rates were nearly 20-fold higher in Latino than non-Latino participants: 3.9% vs. 0.2%.