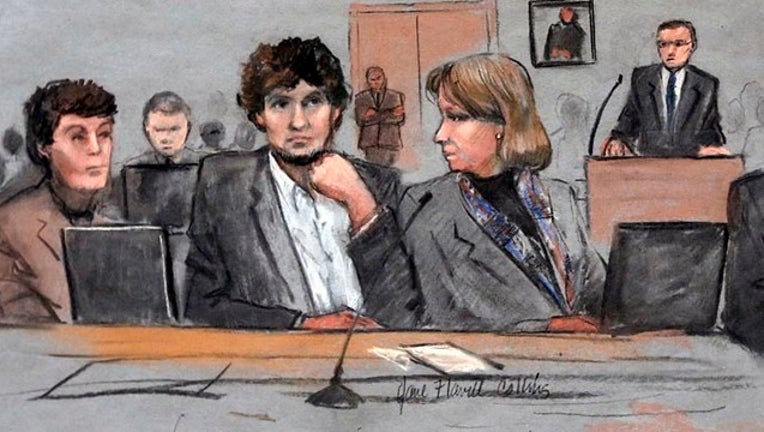 BOSTON (KTVU-AP) — Prosecutors and defense attorneys on Wednesday made their final appeals to the jury that will decide the fate of Dzhokhar Tsarnaev as jurors prepared to deliberate whether the Boston Marathon bomber should get life in prison or the death penalty.

"The choice between these very serious alternatives is yours and yours alone to make," Judge George O'Toole Jr. told the panel.

Jurors must be unanimous in their decision to impose the death penalty. If even a single one votes against death, Tsarnaev will get life in prison.

Prosecutor Steve Mellin said Tsarnaev wanted to cause his victims as much physical pain as possible to make a political statement.

"The bombs burned their skin, shattered their bones and ripped their flesh," Mellin said. The blasts "disfigured their bodies, twisted their limbs and punched gaping holes into their legs and torsos."

"Merely killing the person," he said, "isn't nearly as terrifying as shredding them apart."

Defense attorney Judy Clarke asked jurors to spare Tsarnaev's life, saying her client "is not the worst of the worst, and that's what the death penalty is reserved for."

She asked jurors to hold open their minds and try to understand how and why Tsarnaev became involved in the plot.

"We think that we have shown you that it's not only possible, but probable that Dzhokhar has potential for redemption," she said, adding that he was "genuinely sorry for what he's done."

The prosecutor showed a large photograph of 8-year-old Martin Richard, who was killed in the attack, and other children standing on a metal barricade near where Tsarnaev placed his bomb. Another photo showed bloodied victims on the sidewalk.

Tsarnaev, he said, showed no regret after the bombings, calmly going to buy a half gallon of milk 20 minutes later.

"He acted like it was any other day. He was stress-free and remorse-free," Mellin said. "He didn't care because the death and misery was what he sought that day."

During the four-month trial, prosecutors portrayed Tsarnaev as a callous, unrepentant terrorist who carried out the deadly attack with his radicalized older brother, Tamerlan.

From the start, Tsarnaev's lawyers admitted he participated in the bombing, but they told the jury he was "a good kid" who was led astray by Tamerlan, who wanted to punish the U.S. for its actions in Muslim countries.

Clarke said Tsarnaev's parents favored his older brother and pinned their hopes on him, believing he would become an Olympic boxer. She showed photos of his father at boxing matches with Tamerlan, then asked "Where are the pictures of Dzhokhar? He was the invisible kid."

She noted the testimony of one witness who said the younger Tsarnaev followed his older sibling around "like a puppy."

Tamerlan was a "jihadi wannabe" who returned to the U.S. angry and frustrated after an unsuccessful attempt to join Islamic extremists in Russia, Clarke said. Then he decided to find another way to wage jihad.

Mellin dismissed the contention that the older Tsarnaev somehow led his brother down the path to terrorism. "They were partners in crime and brothers in arms. Each had a role to play and each played it," he said.

Three people were killed and more than 260 injured when two bombs exploded near the marathon's finish line on April 15, 2013.

Tsarnaev, 21, was convicted by a federal jury last month of all 30 counts against him, including use of a weapon of mass destruction. The same jury must now decide his punishment.

Defense lawyers have said a life sentence would also help the families of his victims, who would not be subjected to the years of appeals and public attention that would almost certainly follow a sentence of death.

The defense showed the jury photos of the federal Supermax prison in Florence, Colorado, where Tsarnaev would probably be sent if he gets life. There, his lawyers said, he would be locked in his cell 23 hours a day — a solitary existence that would deny him the martyrdom he apparently sought.

She disputed prosecutors' characterization of Tsarnaev as unremorseful. She cited testimony of Sister Helen Prejean, who said Tsarnaev told her he was sorry about the pain and suffering victims endured.

"What unrepentant, unchanged, untouched jihadi is going to meet with a Catholic nun?" she said.

Mellin reminded jurors that some of them — before they were chosen for the jury — expressed a belief that a life sentence may be worse than death.

"This defendant does not want to die. You know that because he had many opportunities to die on the streets of Boston and Watertown. But unlike his brother, he made a different choice," Mellin said. "A death sentence is not giving him what he wants. It is giving him what he deserves."