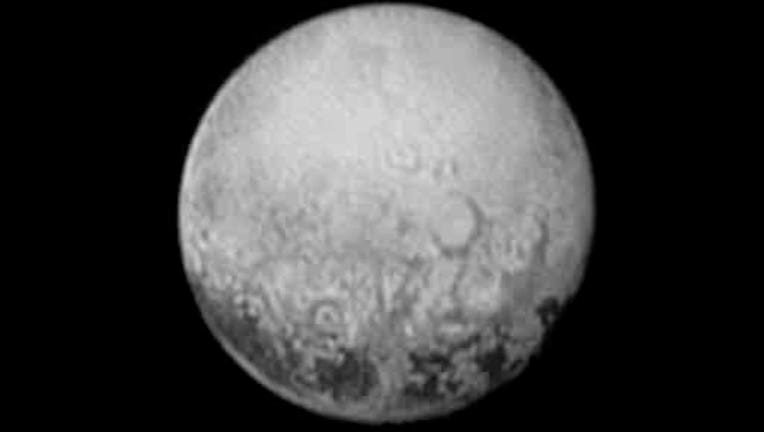 CAPE CANAVERAL, Fla. (AP) — Little Pluto is a little bigger than anyone imagined.

On the eve of NASA's historic flyby of Pluto, scientists announced Monday the New Horizons spacecraft has nailed the size of the faraway icy world.

Measurements by the spacecraft set to sweep past Pluto on Tuesday indicate the diameter of the dwarf planet is 1,473 miles, plus or minus 12 miles. That's about 50 miles bigger than previous estimates in the low range.

Principal scientist Alan Stern said this means Pluto has a lower density than thought, which could mean an icier and less rocky interior.

Mission managers said there's only one chance in 10,000 something could go wrong, like a debilitating debris strike, this late in the game. But Stern cautioned: "We're flying into the unknown. This is the risk we take with all kinds of exploration."

"It sounds like science fiction, but it's not," Stern said as he opened a news conference at mission headquarters in Maryland. "Tomorrow morning a United States spacecraft will fly by the Pluto system and make history."

Discovered in 1930, Pluto is the last planet in our solar system to be explored. It was a full-fledged planet when New Horizons rocketed away in 2006, only to become demoted to dwarf status later that year.

New Horizons has already beamed back the best-ever images of Pluto and big moon Charon on the far fringes of the solar system.

"The Pluto system is enchanting in its strangeness, its alien beauty," said Stern, a planetary scientist at Southwest Research Institute in Boulder, Colorado.

With the encounter finally at hand, it all seems surreal for the New Horizons team gathered at Johns Hopkins University's Applied Physics Laboratory. The energy there Tuesday was described as electric.

Project manager Glen Fountain said New Horizons, at long last, is like a freight train barreling down the track, "and you're seeing this light coming at you and you know it's not going to stop, you can't slow it down."

"Of course, the light is Pluto, and we're all excited," Fountain said.

Three new discoveries were revealed Monday, a tantalizing sneak preview as the countdown to closest approach reached the 21-hour mark.

Besides the revised size of Pluto — still a solar system runt, not even one-fifth the size of Earth — scientists have confirmed that Pluto's north pole is indeed icy as had been suspected. It's packed with methane and nitrogen ice.

And traces of Pluto's nitrogen-rich atmosphere have been found farther from the dwarf planet than anticipated. New Horizons detected lost nitrogen nearly a week ago.

As for pictures, the resolution is going to increase dramatically. Until New Horizons, the best pictures of Pluto came from the Hubble Space Telescope. Hubble did its best from Earth orbit, but managed to produce only crude pixelated blobs of the minuscule world.

The New Horizons spacecraft is the size of a baby grand piano with a salad bowl — the dish antenna — on top. It will come closest to Pluto at 7:49 a.m. EDT Tuesday. Thirteen hours later, around 9 p.m. EDT, flight controllers will learn if everything went well. The spacecraft will have sent the confirmation signal 4½ hours earlier; that's the one-way, speed-of-light, data-transit time between New Horizons and Earth.

Stern expects "a little bit of drama" during closest approach, when the spacecraft is out of touch with ground controllers. New Horizons cannot make observations and send back data at the same time, so scientists opted for maximum science during those most critical hours.

Pluto is the largest object in the so-called Kuiper Belt, considered the third zone of the solar system after the inner rocky planets and outer gaseous ones. This unknown territory is a shooting gallery of comets and other small bodies; every time one of these wayward objects smack one of Pluto's five known moons, the ejected material ends up in orbit around Pluto, thus the debris concern. An extension of the $720 million mission, not yet approved, could have New Horizons flying past another much smaller Kuiper Belt object, before departing the solar system.

Stern expects two opportunities to celebrate Tuesday: one at the time of closest approach and the other once confirmation is received that New Horizons stayed safe and accomplished its long-awaited mission.

"There is that element of exploration and there's that small element of danger," he said, "so I think we're all going to breathe the final sigh of relief at 9 p.m. and that's when we can really call it a successful flyby."