A veteran prosecutor is suing Los Angeles County, alleging he has been defamed, denied promotions and had his fitness to practice law questioned because he has been outspoken critic of District Attorney George Gascón's directives.

LOS ANGELES - A veteran prosecutor is suing Los Angeles County, alleging he has been defamed, denied promotions and had his fitness to practice law questioned because he has been outspoken critic of District Attorney George Gascón's directives.

A representative for the Los Angeles County District Attorney's Office declined Tuesday to comment on the complaint filed Friday in Los Angeles Superior Court by Hatami, the prosecutor in the case of Jose Cuatro and Maria Juarez, a Palmdale couple charged with murder and torture in the death of their 4-year-old son, Noah.

Hatami was one of two prosecutors in the trial of Isauro Aguirre and Pearl Fernandez, who were sentenced to death and life in prison without parole, respectively, for her 8-year-old son Gabriel's death.

When Gascón was sworn in last December, he promised to stop enforcing California's three-strikes law, end use of the death penalty and create a review board to hold law enforcement officials more accountable. As Hatami has continued to be critical of Gascón's changes, the alleged hostile work and retaliation toward him has continued, according to his court papers. 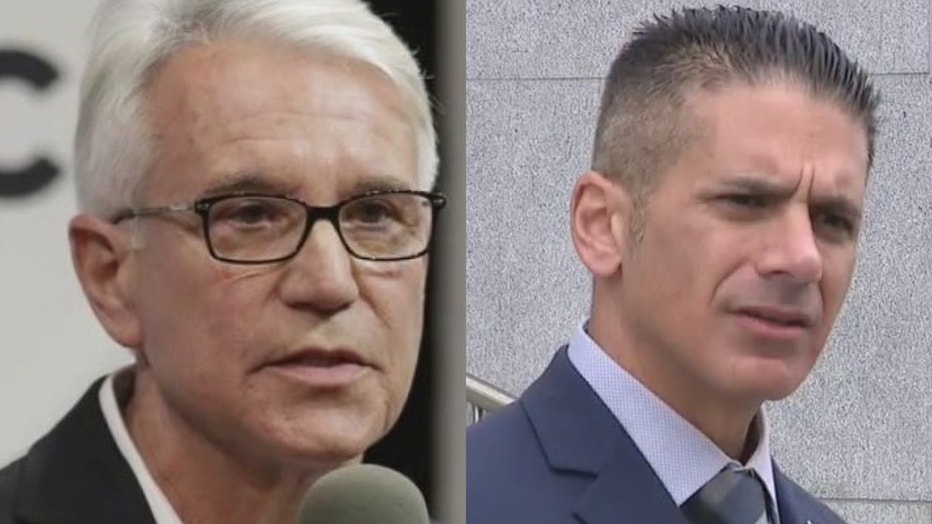 "Gascón has deliberately denied assigning (Hatami) to complex child abuse and murder cases within his jurisdiction as punishment for not going along with his directives," the suit alleges. "This in turn impacts (Hatami's) work and ability to prove himself for desired promotions."

In August, Gascón promoted 15 deputy district attorneys from grade 3 to grade 4, but excluded Hatami, who was due for the elevation due to his "perfect work records, highly positive performance evaluations and numerous high-profile cases and trials," according to the complaint.

Gascón said during an interview last Oct. 27 with Crime Story, "Some people will be unhappy and ... either become internal terrorists or they'll leave. And I know certainly how to deal with both," the suit states. The "racially infused" comment was directed at Hatami, who is part Iranian and whose father is Muslim, the plaintiff alleges.

Last Nov. 18, Gascón said in an interview on Spectrum News 1 the only reason the plaintiff sought the death penalty in the Gabriel Fernandez case was because his ego had been hurt by Aguirre, that Aguirre had rubbed Hatami the wrong way, that Aguirre was not the "heavy" in the case and that Aguirre had refused Hatami's plea deal, according to the suit.

The comments were "knowingly false" and were meant to damage Hatami's reputation and fitness to carry out his duties, according to the suit.

Last Dec. 11, Maxwell Szabo, spokesman for Gascon's transition team, tweeted, "The biggest threat to public safety is the cabal of rogue DAs and their friends in police unions," according to the suit, which alleges the comment was directed at Hatami.

Six days later, Szabo stated on Fox 11, "It seems Mr. Hatami has made a profound discovery rather late in his career. Like any other workplace, if you don't do what your boss tells you to do, you may be disciplined," according to the suit.

Szabo went on to say, "Hatami's delusional theories raise questions as to one's fitness to practice law," the suit states.

That same day, Hatami wrote to county Supervisor Kathryn Barger detailing the alleged harassment and defamatory conduct he was experiencing, but did not hear anything in return, according to his suit.

"The county in no way intervened or gave an official public statement denouncing the defamatory language published by Gascon and Szabo," the suit alleges.

"The county also did not intervene to prevent and stop the hostile work environment created almost immediately after Gascon was sworn in as the Los Angeles County District Attorney in which DAs with long-standing reputations were harassed, intimidated, treated like snitches and retaliated against for speaking up about concerns over the legality of new directives."

Hatami said he filed an internal grievance against Szabo and asked that the District Attorney's Office make a public retraction of Szabo's allegedly defamatory statements.  On Jan. 26, Hatami says he received a letter, sent on behalf of Gascón, that the investigation was closed.

The letter stated that even if the facts Hatami alleged were true, they were not "jurisdictional" to the County of Los Angeles Policy of Equity, which aims to protect the right of employees to be free from discrimination, unlawful harassment, retaliation and inappropriate conduct, according to the suit.