Louisiana family tries to get alligator off a busy highway

The alligator was later removed by professionals after the group spent about two hours on the side of the road.

LIVINGSTON PARISH, La. - A Louisiana family and a group of Good Samaritans tried coaxing a 12-foot alligator that was lying across a lane on Interstate 49 off the road on July 28.

Amanda Carter, who works with an animal rescue, was traveling back to Livingston Parish from Texas after visiting Six Flags with her family when they saw the massive alligator sprawled across a highway lane. According to local reports, the family said they nearly hit the animal thinking it was a tire in the road.

In a video posted to TikTok, Carter, her husband and several strangers parked their cars on the side of the road to try to get the alligator safely out of the lane.

The group used a paint-roller extension pole, something the Carters thought might be useful in prodding the reptile to move, according to WBRZ. While they waited for help to arrive, Carter said they entertained the alligator with turkey sandwiches. 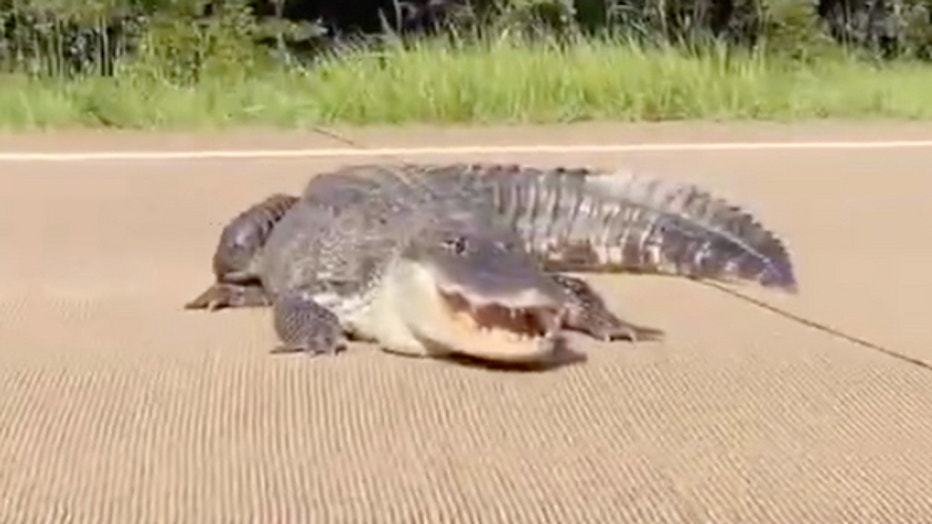 A massive alligator made its way onto a Louisiana interstate. (Amanda Carter)

"It was pretty remarkable. My kids are still telling jokes, like, why did the alligator cross the road?" Carter told WBRZ.

After the group spent nearly two hours trying to move the alligator, professionals arrived and successfully removed it from the highway.

Nobody was injured in the rescue mission and the alligator got to safety.