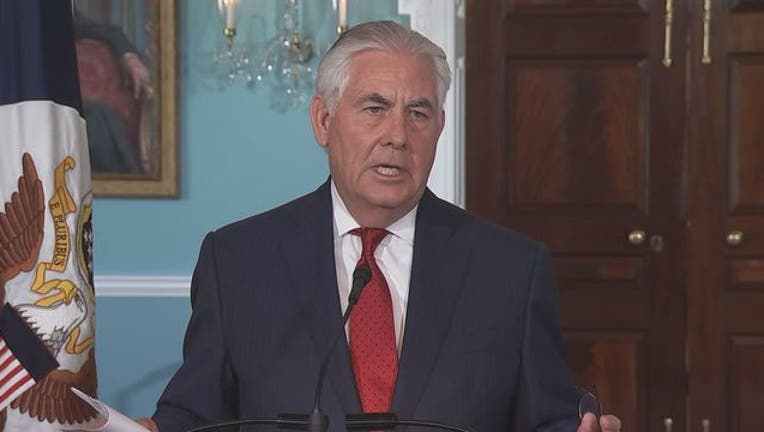 Dec. 13, 2016 - President Donald Trump announces that ExxonMobil Corp. CEO Rex Tillerson will serve as secretary of state. In a statement released by the presidential transition, Trump says Tillerson's career "is the embodiment of the American dream" and his "tenacity, broad experience and deep understanding of geopolitics make him an excellent choice for Secretary of State."

Feb. 1, 2017 - Tillerson is confirmed by the Senate on a vote of 56-43. Tillerson was pressed during his confirmation hearings about his relationship with Russian President Vladimir Putin while he led Exxon.

June 2, 2017 - Trump announces plans for the U.S. to pull out of the 2015 Paris climate agreement. Tillerson had opposed the decision along with some other senior White House officials.

July 26, 2017 - Tillerson tells reporters he's "not going anywhere" amid reports of tensions with the White House over policy decisions. He describes his relationship with the president in a positive light and says he would stay "as long as the president lets me."

Aug. 27, 2017 - Tillerson says in an interview with "Fox News Sunday" that the U.S. is committed to advancing American values in the aftermath of the White House response to a rally by white supremacists in Charlottesville, Virginia, earlier in the month. Asked about the values of Trump, Tillerson says, "the president speaks for himself."

Sept. 30, 2017 - Tillerson says the U.S. has a few channels in which it has been in contact with North Korea and was "probing" to see if Pyongyang would be willing to engage in direct talks on its missile and nuclear programs.

Oct. 1, 2017 - Trump tweets that he doesn't think it's worth seeking talks with North Korean leader Kim Jong Un. "I told Rex Tillerson, our wonderful Secretary of State, that he is wasting his time trying to negotiate with Little Rocket Man," Trump wrote on Twitter. "Save your energy Rex, we'll do what has to be done!"

Oct. 4, 2017 - Tillerson tells reporters he is not considering leaving his post following reports that he had referred to Trump as a "moron." Tillerson declines to address the report itself, saying he is "not going to be part of this effort to divide this administration."

March 8, 2018 - Tillerson says during a visit to Ethiopia that the U.S is not ready for direct talks with North Korea. He says "the first step" is "some kind of talks about talks." Trump, in Washington, decides later that day to accept an invitation to meet with North Korea's leader after an Oval Office meeting that included Vice President Mike Pence, national security adviser H.R. McMaster and Defense Secretary Jim Mattis.

March 13, 2018 - Trump tweets, "Mike Pompeo, Director of the CIA, will become our new Secretary of State. He will do a fantastic job! Thank you to Rex Tillerson for his service! Gina Haspel will become the new Director of the CIA, and the first woman so chosen. Congratulations to all!" Trump tells reporters that Tillerson will be "much happier now."