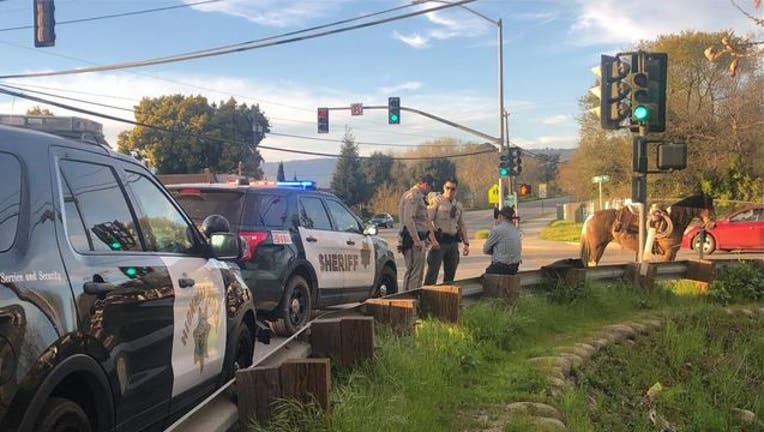 A man was arrested for riding a horse while drunk near Santa Cruz. Photo: Santa Cruz County Sheriff's Office

SANTA CRUZ COUNTY, Calif. (BCN) - California Highway Patrol officers made an "equine stop" Sunday and pulled over a 49-year-old man suspected of riding a horse while intoxicated near Watsonville.

The rider was reported at 6:08 p.m. near state Highway 152 and College Road, and was arrested on suspicion of public intoxication after a DUI evaluation.

"Yes, we did say rider!" the California Highway Patrol said in an Instagram post, adding that it's illegal to operate any vehicle while intoxicated, including a horse.

The horse is named Soraya and was safely taken home by a family member.

This wasn't the first time police stopped a horseback rider suspected of DUI.

Last year, a a 29-year-old Southern California man was stopped by the CHP for rding a white horse on a Long Beach freeway.

An area CHP office posted to Twitter about the unusual stop.

“We get a chuckle out of the interesting situations we encounter from time to time, but one thing the CHP does not do is ‘horse’ around with DUI." one post read.