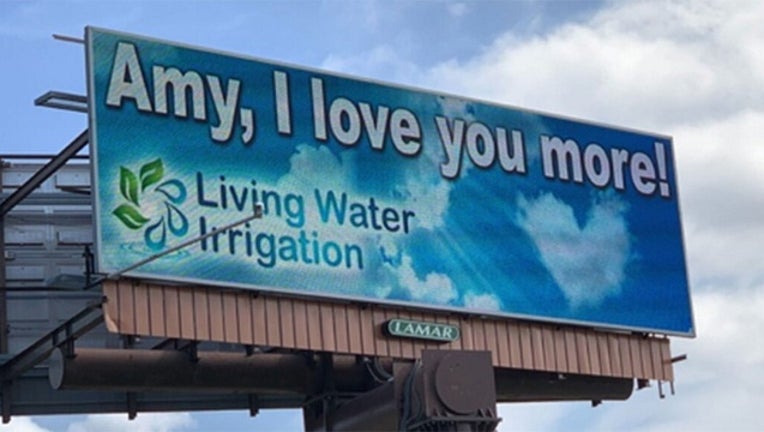 Josh Wilson admitted that though his friends first suspected he was in the “doghouse” after seeing the signs, he insists that the ads are just a small token of his love for his partner. (Courtesy of Fox 23/WZTV)

FOX NEWS - One Oklahoma woman doesn’t need to go looking for a sign that her marriage is strong, as her husband has declared his devotion for all the world to see by renting out eight local billboards that proclaim “Amy, I love you more!”

Josh Wilson has been married to wife Amy for five years and was recently inspired to make his passion known by splashing the love note across eight billboards in their hometown of Tulsa, Fox 23 reports.

Josh owns Living Water Irrigation and bought the ad space to advertise the lawn sprinkler system company’s services. When he realized the promotion wasn’t doing much for his small business, he looked to his heart and decided to blast “Amy, I love you more!” across all of the digital billboards.

To ensure that Amy knew just who the love note was from, Josh, naturally, left the Living Water Irrigation’s logo in the corner of the signs.

The man admitted that though his friends first suspected he was in the “doghouse” after seeing the signs, he insists that the ads are just a small token of his love for his partner.

"She tolerates me and lets me build this little company and lets us have fun,” he told KOKI. “It's the least I could do to tell her I love her."

By putting the message front and center, Wilson acknowledged that he’s quite literally raised the stakes for his Green County peers, in matters of the heart.

“A lot of text messages and a lot of phone calls from friends saying, ‘Thanks a lot, buddy. Now I have to do something,’” he joked. “So, that’s always good. As long as I can make my wife feel good for all that she does for me and my family, it was a joy to do so."

In the near future, the Living Water Irrigation signs will change to reflect affections for another beloved member of the Wilson clan – the family’s dogs, KOKI reports.