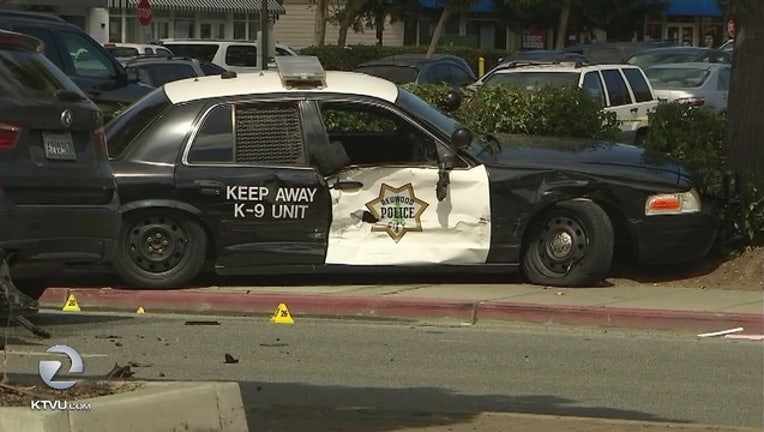 REDWOOD CITY, Calif. (KTVU) - The San Mateo County Coroner has confirmed that the pedestrian who was slammed into by a 12-year veteran officer of the Redwood City police department has died. He has been identified as 25-year-old Alex Camron Hill.

The accident, which took place in front of the Sequoia Station shopping center on El Camino Real during the morning hours of Wednesday, September 18, was captured on surveillance video from a nearby automotive repair business.

In the video, a Redwood City patrol vehicle is seen traveling southbound on El Camino Real at a high rate of speed without lights or sirens, before losing control, striking Hill and two other vehicles, then coming to rest on a sidewalk. Police say the officer was responding to a home invasion robbery at the time.

Police initially reported Hill's condition as critical, but stable. The San Mateo County Coroner would not specify when Hill died, but did confirm it was from injuries sustained in the crash.

The Redwood City police department has not shared the name of the officer who caused the fatal wreck, but the officer is a female 12-year veteran K-9 handler for the department.

The officer and K-9 were not injured in the crash.

The California Highway Patrol is investigating the incident.