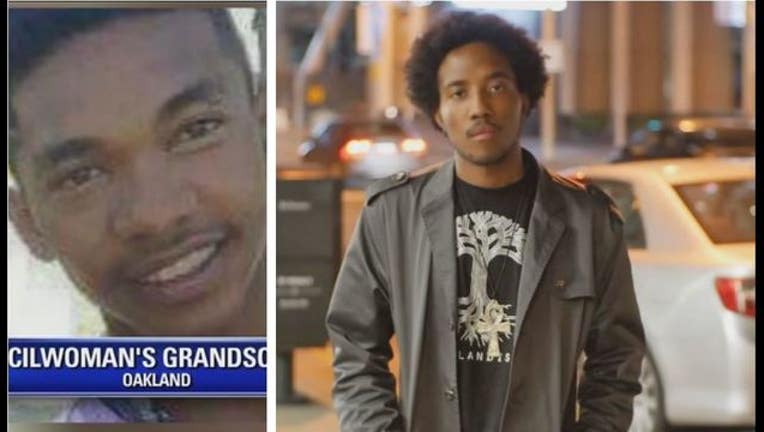 OAKLAND, Calif. (KTVU) -  An Alameda County prosecutor told jurors on Monday that they should find a Vallejo man guilty of first-degree murder for his role in the fatal shooting in 2015 of a 17-year-old boy who Oakland City Councilwoman Lynette Gibson McElhaney considered to be her grandson.

In his closing argument in the trial of Shiheim Johnson, who was 19 at the time and is now 22, prosecutor Tim Wagstaffe said Johnson and a 15-year-old boy had "a harebrained idea to commit an armed robbery" that went wrong, leading to the shooting death of Torian Hughes in the 900 block of
Mandela Parkway in West Oakland at about 1:40 p.m. on Dec. 20, 2015.

Wagstaffe said Hughes wanted to buy a gun from the 15-year-old and Johnson because he had recently been assaulted on BART and felt that he needed to protect himself.

Wagstaffe alleged that Johnson pointed a gun at the head of Hughes' cousin, Joe Billy Green, who was with Hughes, took a cellphone and cash from him and then directed the 15-year-old boy to shoot Hughes.

Hughes, who briefly attended McClymonds High School in West Oakland in the fall of 2015 and was in an independent study program at the time of the incident, died at a local hospital a short time after the
shooting.

Gibson McElhaney had attended every day of Johnson's trial since it began on Feb. 19, but she was absent on Monday because she was hit with another tragedy over the weekend when her 21-year-old son Victor McElhaney was fatally shot in Los Angeles.

Los Angeles police said Victor McElheney died Sunday morning, about 10 hours after he was shot in an apparent botched robbery near the University of Southern California campus.  He transferred in 2017 from California State Hayward East Bay in Hayward to USC's Thornton School of Music, where he was a senior, according to USC Annenberg Media.

Gibson McElhnaney was still in Los Angeles on Monday to arrange to bring her son's body back to Oakland. Funeral arrangements for Victor McElhaney are still pending.

Johnson's attorney Omid Khalilnaji told jurors that they should find Johnson not guilty because Green's identification of Johnson as the man who robbed him and ordered the 15-year-old to shoot Hughes is unreliable.

"The District Attorney has not proven the charges beyond a reasonable doubt," Khalilnaji said.

But Wagstaffe said Green's identification of Johnson is credible because "he has never wavered."

The teen who allegedly shot Hughes is being prosecuted separately
in the juvenile court system.

Wagstaffe told jurors, "Everyone agrees (the boy who was 15 at the time) was the shooter in this case."