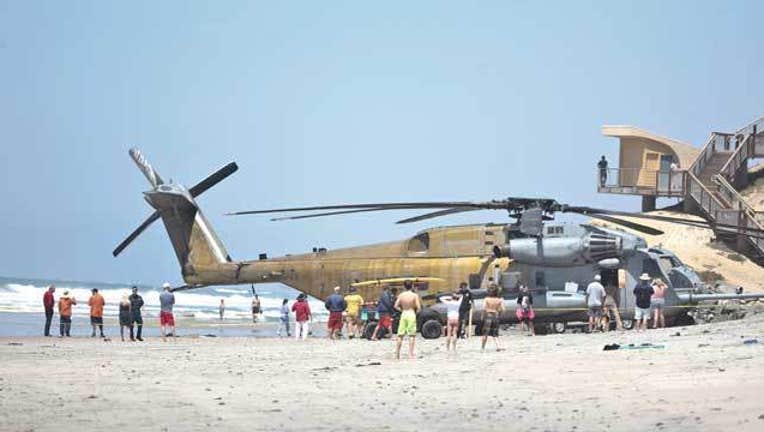 SOLANA BEACH, Calif. (KTVU-AP) -- A Marine Corps helicopter twice the size of a humpback whale made an emergency landing on a Southern California beach on Wednesday, bringing no damages or injuries but leaving an unforgettable spectacle for surrounding swimmers and sunbathers.

The 100-foot CH-53E Super Stallion landed on the shore of this northern San Diego County town shortly after 11:30 a.m. after a low oil-pressure indicator light went on in the cockpit, Marine Corps Air Station Miramar said in a statement.

The huge copter crouched on the sand below a bluff and only a few yards from the surf line, dwarfing surfboard-topped lifeguard vehicles parked nearby.

Bing Bush and his wife, Julie, who live in a cliffside complex overlooking the beach, were in for a surprise when they stepped out their front door.

"We were just coming down for a beach walk -- we come down here quite a bit -- and lo and behold there's a chopper on the beach," Bing said, after posing for a photo in front of the chopper with his wife. "We thought maybe it was a movie shot or a movie set or something like that."

The precautionary landing came during routine training, Gunnery Sgt. Donald Bohanner said. The Marines and a local hazardous materials team removed oil that leaked from the copter to the beach, Bohanner said.

"There was no injuries, no damage to any property, no injuries to any civilians, which was an awesome, awesome thing right there," Bohanner said.

J.D. Kalt, a 10-year-old who came to the beach with his mother and some friends to check out the helicopter, was amazed by its size. He had his mother take a cellphone photo of him with his two friends in front of the massive aircraft and then bounced around in the sand staring as Marine mechanics wearing flight suits and helmets scrambled atop the chopper.

"It's huge! I like military and Navy, so I might fly one of those someday," he said.

Four hours after the landing, gawkers gathered to watch it take off again and head back to the Miramar base amid a storm of sand and a deafening roar.

The helicopter is the largest and heaviest in the U.S. military. It has three engines, can travel at more than 170 mph and can carry a crew of four.