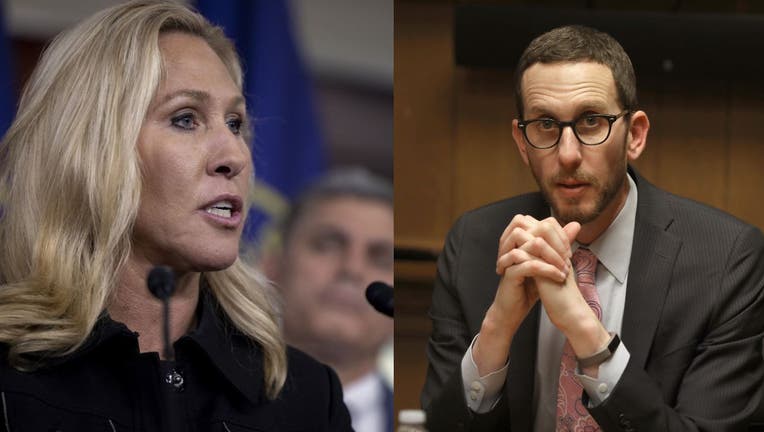 Photographed left: Congresswoman Marjorie Taylor Greene (R-GA) speaks at a press conference on US funding for Ukraine at the U.S. Capitol on November 17th, 2022 in Washington, DC. Pictured right: Senator Scott Wiener comes in to talk to the editorial (Photo by Nathan Posner/Anadolu Agency via Getty Images))

SACRAMENTO, Calif. - One day after Rep. Marjorie Taylor Greene had her Twitter account reinstated, she took aim at state Sen. Scott Wiener with what he called a homophobic epithet.

Greene, a far-right Republican from Georgia, tweeted that Wiener is a "communist groomer." Wiener, an openly gay Democrat from San Francisco, has denounced using the word groomer, because of its homophobic and transphobic connotations.

The term has begun appearing frequently on social media following the mass shooting at a gay nightclub in Colorado Springs.

The Twitter spat between the lawmakers originated with Wiener tweeting that calling someone a groomer is dangerous because it equates queer people with pedophiles.

"The word ‘groomer’ is categorically an anti-LGBTQ hate word. It’s super homophobic/transphobic. It plays into the slander that LGBTQ people are pedophiles. It’s no different than calling someone a fagg*t," said Wiener. "If you call someone groomer, you’re inciting violence against LGBTQ people,"

Not long after her account was reinstated, Greene responded by labeling Winer a "communist groomer" while using the platform to promote her legislation that would outlaw gender-affirming medical care for youth.

"Pass my Protect Children’s Innocence Act to stop communist groomers like this from using state government power to take children away from their parents to allow a for-profit medical industry to chop off these confused children’s genitals before they are even old enough to vote," she said.

Greene has previously come under fire for racist remarks and her embrace of conspiracy theories. She was ultimately booted from the Twitter platform in January for violating the company's misinformation policy.

But with Elon Musk now at the helm of Twitter, he's ramping up efforts to reshape the site, moves that have been both swift and chaotic.

Musk has frequently expressed his belief that Twitter had become too restrictive of freewheeling speech.