The City of Martinez is in the national spotlight, after a video went viral showing a woman painting over a Black Lives Matter mural.

MARTINEZ. Calif. - Two people whose images went viral last month as they were shown trying to paint over the "Black Lives Matter" mural on a downtown Martinez street pleaded not guilty Tuesday morning to hate crime and vandalism charges. 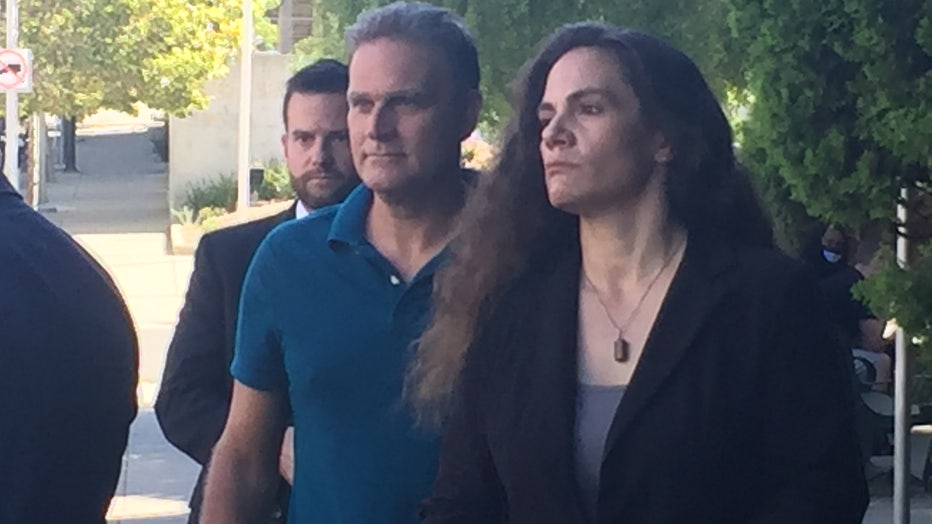 David Nelson and Nicole Anderson outside of court in Martinez on Aug. 4, 2020. (Sam Richards)

An attorney for Nicole Claudia Anderson, 42, and David Richard Nelson, 53, both of Martinez, said the hate crime charges against the couple are undeserved and are being pushed by a district attorney he described as "highly politicized."

"The fact that my clients disagree with the (BLM) mission is a problem for the DA," said Bilal Essayli, a Newport Beach-based attorney. Essayli's firm is being retained by the Center for American Liberty, a conservative group that "fights against growing anti-free-speech and anti-civil liberties trends," according to its website.

During a brief appearance with reporters after Tuesday's arraignment in Contra Costa County Superior Court, Essayli also criticized the city of Martinez, which permitted the street mural, contending city property and resources -- at taxpayer expense -- were used to endorse a "political movement" in Black Lives Matter.

Through a spokesman, District Attorney Diana Becton declined to comment Tuesday on Essayli's contentions. But in July, when the charges against Anderson and Nelson were filed, she said in a statement that the mural is "a peaceful and powerful way to communicate the importance of Black lives in Contra Costa County and the country."

Becton's office had charged Anderson and Nelson each with three misdemeanors -- violation of civil rights, vandalism and possession of tools to commit vandalism or graffiti. Essayli objected specifically to the civil rights charge, saying painting over the mural is equivalent to peaceful protesters expressing their views.

Anderson and Nelson, who are domestic partners, are scheduled to return to Superior Court Oct. 13 for a pre-trial conference.

Approximately 100 people helped paint the Black Lives Matter mural on the morning of July 4 on Court Street, directly in front of the Wakefield Taylor Courthouse building (where Tuesday's arraignment took place). That afternoon, the district attorney's complaint says, Anderson allegedly started to paint over the yellow letters "B" and "L" in the word "Black," using black paint and a paint roller with an extended handle.

Contra Costa County District Attorney's office on Tuesday charged two people with a hate crime for defacing a Black Lives Matter mural in Martinez on July 4. Neighbors say they are surprised at this behavior.

In a video of the defacing, which went viral on social media and attracted national attention, Anderson can be seen saying the mural "is not happening in my town." Nelson was standing near Anderson, making a video of her painting over the yellow mural letters.

Wearing a red "Make America Great Again" hat, Anderson was himself captured on video saying, "There is no oppression, there is no racism, it's a leftist lie." The pair were then shown walking back to their pickup truck, which had the word "Nicole" printed on the back gate.