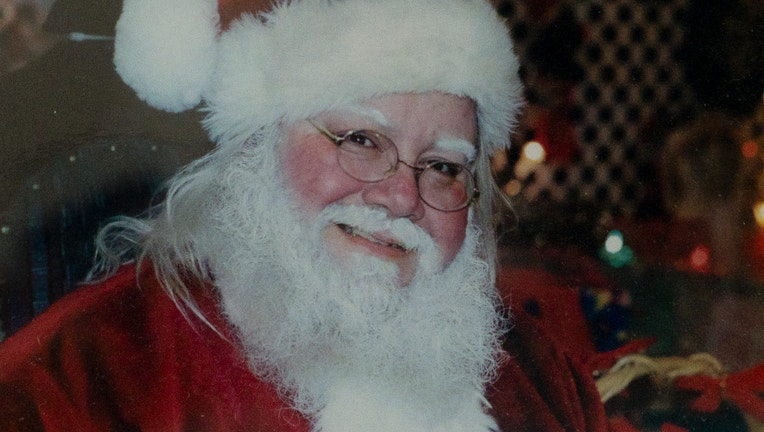 Marty Ochoa as Santa in an undated photo. Marty, a lifelong Martinez, Calif., resident know as 'Mr Santa', died on June 7. Marty also ran, with his wife, snack shacks at Joe DiMaggio Fields by the marina, at Willow Pass Fields in Concord and at Conco

MARTINEZ, Calif. - The dozens of parakeets in the side yard enclosure still chirp non-stop and Sugar, the "daddy's girl" Yorkshire terrier, still looks for Marty Ochoa in his chair.

It's been a week since Martinez lost Ochoa, 65, known as "Mr. Santa Claus" around town and one of its most visible ambassadors.

Ochoa was nearly a lifelong resident, spending his last 35 years in his grandparents' former house, across the street from the one in which he grew up.

If something happened in Martinez, Ochoa was either there or knew all about it.

"He knew so many people; I didn't know a drop in the bucket of who he knew," said his wife of 36 years, Barbara, next to a table full of floral arrangements.

Some food and a note sit on the front porch, where Marty spent so many hours in retirement, either with friends or talking to people walking by.

"People would come around and ask him what they should do about something -- who they should meet when they want to get things done," Barbara said. "He knew everyone."

Ochoa died June 7 at Kaiser Permanente's Walnut Creek Medical Center, a bit more than a month after hitting his head in a fall at the couple's home.

If you're a Martinez resident, there's a decent chance you have a photo of Ochoa in a red suit with your children. Or eaten his food.

He was a young athlete and an Eagle Scout in Martinez.

In addition to running his own downtown restaurant and catering business, the Ochoas ran the city's Little League snack shack at the Joe DiMaggio Fields for decades.

Marty was a fixture every Christmas as the town's downtown Santa Claus.

He was even recognized by a doctor and a nurse as the Martinez Santa Claus during his last month.

"A doctor in the ICU at Kaiser said 'I didn't realize it, but I know him. My son sat on his lap,' Barbara said.

"The day he fell, he'd just got his application in for this year," Barbara said. "He always said he never wanted to be a mall Santa -- a production line Santa."

But when the city sold the booth to a private photographer who cut Ochoa's hours, he relented and went to the bigger stage.

"The guy (at Sunvalley) took his application from the basket and said 'This is the one I've been waiting for,'" Barbara said. "They spent years trying to get him."

Ochoa's importance to the community is obvious on the decorated walls of what Barbara called his "Hall of Shame."

"When I think about him, I'll remember our breakfast gatherings at TJ's, lunches at the Front Room, his generosity, and love of being involved in the Martinez community," said Rachel Martinez, the former interim president of the Martinez Chamber of Commerce. "Marty always encouraged me to step up and get more involved in the community.

"Now that he's passed, the variety of ways in which he was involved in Martinez through the years is just staggering."

Ochoa also served on the board of St. Catherine of Siena school (which he attended) and was the announcer of the city's annual Fourth of July parade.

"I've known Marty for years," said former City Councilmember Noralea Gipner. "He was a big supporter and hard worker to St. Catherine's and he was a supporter for my homeless projects. He was the kind of guy who is always willing to help."

Ochoa was also a volunteer firefighter who was one of the first on the scene of the 1976 Yuba City school bus disaster that killed 28 people.

Born with a congenital hip issue preventing him from becoming a full-time firefighter, Marty worked as a fleet services manager for Contra Costa County, a job from which he retired after 25 years in 2011.

He celebrated with a backyard party for about 350 of his closest friends (with a live band and a mechanical bull).

The nearby basement has tables and carpet from "Marty O's Pizza," the Italian restaurant they ran for a few years after Marty's retirement.

It also holds a framed photo of Marty's 1964 Pee Wee baseball team with fellow Martinez legend Joe DiMaggio, who -- like Marty during his years at Alhambra High -- wasn't a bad athlete.

"He knew who Marty was," Barbara said. "Dimaggio didn't like signing autographs.

At a dinner once, a little boy was sitting at Marty's table and, in front of DiMaggio, Marty said loudly, 'I bet if you ask this man nicely, he'd give you his autograph.' And he did."

The couple never had children.

They met during the brief time Marty worked in Stockton and spent two years there before Ochoa couldn't resist the pull from his hometown.

Ochoa would've been a natural on the City Council, something his wife discouraged him from doing, thanks to watching her father serve on Stockton's City Council.

But he didn't need to hold elected office to be one of Martinez's top citizens. Everyone already knew he was already the city's biggest fan.

"He was born and raised in Martinez," Barbara said. "He loved Martinez."