SAN FRANCISCO - San Francisco politicians are reacting to Mayor London Breed's deeply personal blog post, where she revealed a 20-year-friendship, and a brief romantic relationship, with Mohammed Nuru, the disgraced Public Works Director who was charged last month in a public corruption scandal.

Calls range for the mayor to resign, step back and to face questioning in front of the full Board of Supervisors over potential ethical violations.

"Mohammed Nuru and I have been close personal friends for more than 20 years. We dated for a brief time, two decades ago, long before I ever ran for office," she wrote. "Nevertheless, he, and his now-adult daughters, have remained close friends for all those years. 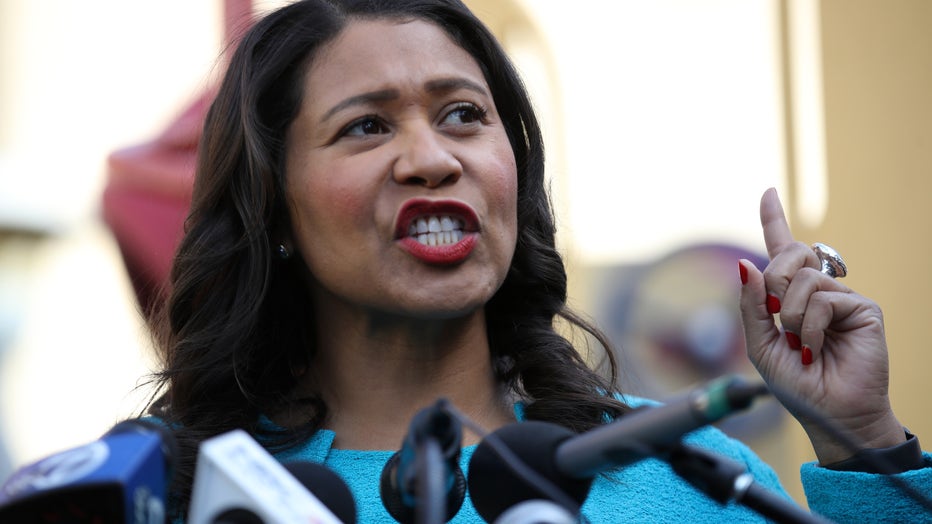 Breed released the unusual admission on Friday, in a Medium post titled "transparency and accountability."

But the problematic part for most of the Board of Supervisors was her acknowledgement that she had accepted a $5,600 gift from Nuru last year in the form of having her car repaired.

She wrote that she planned to reimburse Nuru, but hasn't yet.

Following the revelation, she set the record straight at a news conference where she underscored that her Nuru's romantic relationship had long been over.

"I decided to go forward with this because there were a number of rumors and I want to make sure a number of people heard about our relationship from me," she said.

After the revelation, Supervisor Gordon Mar suggested in a statement that Breed take a step back from her duties.

"Mayor Breed's admission of thousands of dollars in unreported gifts from a subordinate is likely illegal, certainly unethical, and part of a culture of casual corruption that is eroding the faith of the public. It must end. Given the seriousness of this admission, the direct connection to the central figure in the FBI's investigation into public corruption, I believe we need to put the people of San Francisco first. I believe Mayor Breed should do the right thing and temporarily step back from her duties until a full, independent investigation can be completed."

Supervisor Hillary Ronen, a political opponent, said accepting a gift from a staff member is troubling.

"I do think she should resign. What I am sick of in this city is the culture of corruption," she said.

Supervisor Aaron Peskin echoed similar sentiments, but wants answers before he can call for her resignation.

"She's calling one of her staff to fix and pick up her car and get a rental car," he said. "Was he doing that instead of running the department of public works?"

Supervisor Dean Preston on Twitter wrote: “I am deeply concerned with revelations today that Mayor London Breed violated San Francisco law by taking thousands of dollars in gifts from a City Hall subordinate." He continued, “This much is clear: The mayor has committed a serious violation of San Francisco law. Under these circumstances, the mayor should immediately appear before the Board of Supervisors to answer any and all questions related to these revelations. The mayor’s statement today raised more questions than it answered."

Supervisor Matt Haney echoed similar sentiments, posting on Twitter, "Gifts from subordinates are not allowed. Period. It isn't an issue of reporting."

The city's District Attorney Chesa Boudin said while Breed is presumed innocent over possible ethical violations, his office will investigate any potential criminal liability and that he takes "public corruption very seriously."

Nuru and restaurant owner Nick Bovis, were arrested by FBI agents on Jan. 27; among five “schemes” that involved trying to bribe an airport commissioner to vote in favor of a Bovis-owned business at the airport and Nuru accepting travel and gifts from a Chinese developer doing business in town.

Nuru resigned this week. Both men have denied the criminal allegations.

I write this in the spirit of transparency, because in the wake of a scandal at City Hall, I think San Franciscans are entitled to hear directly from their Mayor. And also, quite frankly, to dispel some unfortunate rumors that have already begun to circulate.

Mohammed Nuru and I have been close personal friends for more than 20 years. We dated for a brief time, two decades ago, long before I ever ran for office. Nevertheless, he, and his now-adult daughters, have remained close friends for all those years.

And so it was with a profound sense of shock, sadness, disappointment and anger that I learned of the federal charges against Mohammed announced two weeks ago.

From the perspective of serving as your Mayor, I was furious. The allegations against Mohammed and his co-defendants, if proved, represent a betrayal of the public trust that cuts to the core of our mission, and our duty, as public servants. This could weigh down the hardworking women and men of not only the Public Works Department, but the City workforce as a whole. We endeavor to earn the public trust, work hard and achieve results for our City, but scandals like this one cut away at the public’s faith in our departments.

From the perspective of a close personal friend, I was confused and heartbroken. If the charges are true, I can only wonder how could someone give up so much, for seemingly so little, endanger one’s hard-earned reputation and livelihood, and upend the lives of family, friends, colleagues and the citizens he served?

It was, and remains, shocking.

When he was arrested, Mohammed was placed on leave by his supervisor. I immediately called for the City Attorney and Controller to conduct an independent investigation into the charges and the impacted departments, and issued an Executive Directive calling on City employees to be transparent and prioritize cooperation with the investigation.

Shortly after he was arrested, some local officials and many in the public called for his immediate firing. While I understand that call, it’s imperative that we respect all the laws and procedures pertaining to a public employee’s termination. Before this process had been completed, however, he submitted his resignation.

Now, we will all have to let the justice system take its course.

For my part, I will do my job — which includes supporting the independent investigation under way by the City Attorney and the Controller. The City Attorney is an independently elected official; the Controller operates independently of the Mayor’s Office. Whatever comes of the federal case, I am confident our City Attorney and Controller will uncover any improper actions that were taken and recommend reforms to ensure they never happen again. Once we have recommendations and analysis completed by these two independent offices, I will join my fellow elected officials to implement any reforms necessary to restore the public trust.

As I said, I’ve known Mohammed for more than 20 years, and as with so many others in our City government, I’ve been both a friend and a colleague. This situation has forced so many of us to examine our relationship.

And in the spirit of my directive to city employees to be as transparent as possible, I want to note that in my annual “Statement of Economic Interests,” due this coming April 1, I will voluntarily disclose a “gift” of approximately $5,600 from Mohammed Nuru.

Last year, my personal automobile had broken down and Mohammed, acting as my friend, took it to a private auto mechanic. The estimated cost of repairs seemed more than the 18-year-old car was worth, but Mohammed had it fixed. Later, when the car still wasn’t working, he helped secure a rental. The estimated value of those things is about $5,600. It had been my intention to sell the car (which is still not running consistently, even after the repairs) and reimburse Mohammed.

Now, gifts provided “by an individual with whom the official has a long term, close personal friendship unrelated to the official’s position” are not required to be reported under the Fair Political Practices Commission’s rules. But since I have not yet been able to sell the car — and given all that has now happened — I have chosen to make this voluntary disclosure.

I realize that my close friendship to someone accused of something so serious will undoubtedly affect my life, and maybe even my life’s work. It has happened before, with friends and loved ones and members of my broader community.

It is part of the reason this hurts so much; I have striven my entire life to rise above the negative stereotypes and harmful expectations cast upon myself and those around me, to perform a public service, and to earn the public’s trust.

But neither will I make excuses for any misdeeds. He will have to live with any consequences, and we in government must work to ensure our institutions live up to the highest levels of integrity.

I have no doubt that some will seek to exploit what I have shared here, to harm me politically. I, and others, may be weighed down from guilt by association as a result of this episode.

But I can’t worry about that now. What’s important is that we all hold ourselves accountable to the people of San Francisco, and do our jobs to the best of our abilities, honestly and faithfully, as our oath requires.

We must continue to support the hard-working employees at our Public Works Department, who are out there every day cleaning our streets and striving to improve our City. Finally, we must take this opportunity to make necessary reforms to strengthen accountability in our departments and restore the public trust.