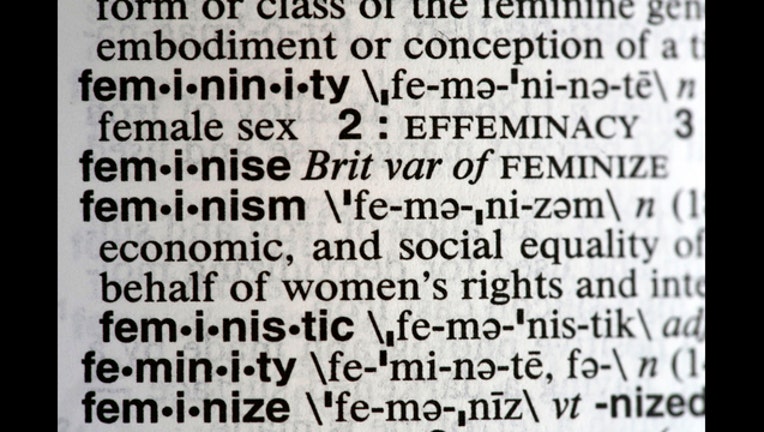 This Monday, Dec. 11, 2017, photo taken in New York shows the word feminism listed in the dictionary. Merriam-Webster has revealed “feminism” as its word of the year for 2017 on Tuesday, Dec. 12. (AP Photo/Peter Morgan)

Yes, it's been a big year or two or 100 for the word. In 2017, lookups for feminism increased 70 percent over 2016 on Merriam-Webster.com and spiked several times after key events, lexicographer Peter Sokolowski, the company's editor at large, told The Associated Press ahead of Tuesday's annual word reveal.

There was the Women's March on Washington in January, along with sister demonstrations around the globe. And heading into the year was Democrat Hillary Clinton's presidential campaign and references linking her to white-clad suffragettes, along with her loss to President Donald Trump, who once boasted about grabbing women.

The "Me Too" movement rose out of Harvey Weinstein's dust, and other "silence breakers" brought down rich and famous men of media, politics and the entertainment worlds.

Feminism has been in Merriam-Webster's annual Top 10 for the last few years, including sharing word-of-the-year honors with other "isms" in 2015. Socialism, fascism, racism, communism, capitalism and terrorism rounded out the bunch. Surreal was the word of the year last year.

"The word feminism was being use in a kind of general way," Sokolowski said by phone from the company's headquarters in Springfield, Massachusetts. "The feminism of this big protest, but it was also used in a kind of specific way: What does it mean to be a feminist in 2017? Those kinds of questions are the kinds of things, I think, that send people to the dictionary."

Feminism's roots are in the Latin for "woman" and the word "female," which dates to 14th century English. Sokolowski had to look no further than his company's founder, Noah Webster, for the first dictionary reference, in 1841, which isn't all that old in the history of English.

"It was a very new word at that time," Sokolowski said. "His definition is not the definition that you and I would understand today. His definition was, `The qualities of females,' so basically feminism to Noah Webster meant femaleness. We do see evidence that the word was used in the 19th century in a medical sense, for the physical characteristics of a developing teenager, before it was used as a political term, if you will."

Webster added the word in revisions to his "An American Dictionary of the English Language." They were his last. He died in 1843. He also added the word terrorism that year.

"We had no idea he was the original dictionary source of feminism. We don't have a lot of evidence of what he was looking at," Sokolowski said.

Today, Merriam-Webster defines feminism as the "theory of the political, economic and social equality of the sexes" and "organized activities on behalf of women's rights and interests."

Another spike for the word feminism in 2017 occurred in February, after Kellyanne Conway spoke at the Conservative Political Action Committee.

"It's difficult for me to call myself a feminist in the classic sense because it seems to be very anti-male and it certainly seems to be very pro-abortion. I'm neither anti-male or pro-abortion," she said. "There's an individual feminism, if you will, that you make your own choices. ... I look at myself as a product of my choices, not a victim of my circumstances. And to me, that's what conservative feminism is all about."

She was applauded, and she sent many people to their dictionaries, Sokolowski said. The company would not release actual lookup numbers.

Other events that drew interest to the word feminism was the popular Hulu series, "The Handmaid's Tale," and the blockbuster movie, "Wonder Woman," directed by a woman, Patty Jenkins, Sokolowski said.

Merriam-Webster had nine runners-up, in no particular order:

-- Recuse , in reference to Jeff Sessions and the Russia investigation.

-- Empathy , which hung high all year.

-- Syzygy , the nearly straight-line configuration of three celestial bodies, such as the sun, moon and earth during a solar or lunar eclipse.

-- Gyro , which can be pronounced three different ways, a phenom celebrated in a Jimmy Fallon sketch on "The Tonight Show."

-- Federalism , which Lindsey Graham referred to in discussing the future of the Affordable Care Act.

-- Hurricane , which Sokolowski suspects is because people are confused about wind speed.

-- Gaffe , such as what happened at the Academy Awards when the wrong best picture winner was announced. That was a go-to word for the media, Sokolowski said.