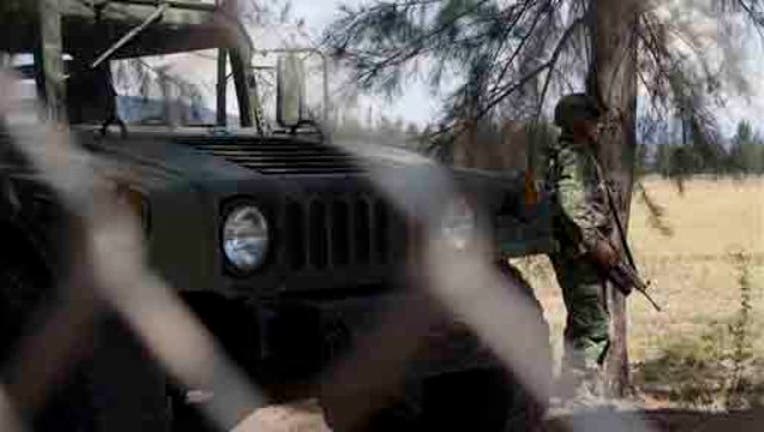 MEXICO CITY (AP) — About 40 people were killed Friday in what authorities described as a large-scale shootout between law enforcement and criminal suspects in western Mexico.

Almost all the dead were suspected criminals, said a Federal Police official, who spoke on condition of anonymity because he was not authorized to talk with journalists.

There were few details of the reported gunbattle, but video obtained by The Associated Press showed federal police coming under fire and bodies strewn throughout a ranch. A local police official in the neighboring town Puerto de Vargas said the location is called Rancho del Sol. The official wouldn't give his full name to the AP but said his department received a report of the confrontation from fellow police in the neighboring town Ecuandureo and was told to keep everyone calm.

With dozens dead, it was the most violent confrontation between authorities and alleged drug traffickers in recent memory.

The confrontation started when federal police officers tried to pull over truck on the highway near the ranch, and as they got close people inside the truck opened fire, Michoacan Gov. Salvador Jara told Radio Formula.

According to an account of events circulated among federal police units, the first report of the confrontation came in at about 8 a.m. Friday. The government dispatched special forces and a Black Hawk helicopter as reinforcements.

The confrontation occurred near the border of Michoacan and Jalisco states, an area known as being dominated by the Jalisco New Generation cartel, which has mounted several large-scale attacks on federal and state forces in recent weeks.

While there was no immediate confirmation on the identity of the suspects, Jara told Milenio television that "it was most likely" the Jalisco cartel was involved.

The scene of the shootout is close to the community of La Barca, a Jalisco town where authorities in 2013 found more than five dozen bodies in mass graves linked to the Jalisco cartel. According to the federal police account, which was not immediately confirmed by top officials, units confiscated dozens of high-caliber weapons and a rocket launcher.

In April, gunmen believed linked to the cartel ambushed a police convoy in Jalisco, killing 15 state police officers and wounding five. Earlier this month, the New Generation cartel shot down a military helicopter with a rocket launcher in Jalisco, killing eight aboard.

The area, about two hours from the Lake Chapala communities of Canadian and U.S. expatriates, has also been marked by killings of politicians. In 2014, gunmen killed the mayor of a nearby town, Tanhuato.