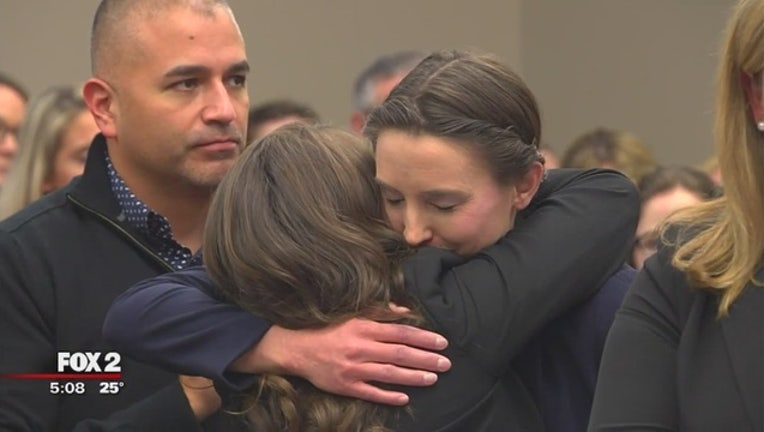 The announcement that Simon is stepping down came hours after the sentencing of Nassar , who worked at Michigan State as a doctor and received 40 to 175 years in prison for molesting young girls and women under the guise of medical treatment. Some were athletes at the school.

Many of the victims accused the university of mishandling past complaints about Nassar.

"As tragedies are politicized, blame is inevitable," Simon said in her resignation letter . "As president, it is only natural that I am the focus of this anger."

Simon, who earned her doctorate at Michigan State in 1974, was promoted to school president in 2005 after moving up the ranks in the school while flourishing in various administrative roles.

"We agree with Dr. Simon that it is now time for change," Michigan State Board of Trustees Chairman Brian Breslin said in a statement. "President Simon has served with distinction as MSU's President for 13 years and has been a constant presence at the university for more than 40 years. She literally has devoted her entire professional life to this institution, and more than anyone else has helped make MSU a national and international leader in higher education."

Simon's resignation was welcomed in the Legislature, where pressure had been building for her to step down or be ousted by the university's board of trustees.

Sen. Curtis Hertel Jr., a Democrat from East Lansing, where the campus is located, called it "an important step in moving the university forward."

Hertel, who graduated from Michigan State, said further investigation is needed. Trustees have asked Attorney General Bill Schuette to investigate how Michigan State handled the allegations against Nassar. The NCAA earlier this week asked the school for information regarding potential violations related to Nassar.

"We need to find out beyond the president's office who had reports and didn't act," Hertel said.

Former Michigan State gymnastics coach Kathie Klages resigned last year after she was suspended for defending Nassar over the years. Klages is accused of downplaying complaints made by two teens in 1997.

A Title IX probe conducted by the university cleared Nassar of sexual assault allegations in 2014. At least 12 reported assaults occurred after the investigation ended, according to a university police report that was provided to the FBI for review by the U.S. attorney.

The school let Nassar see patients for 16 months while the campus police also conducted a criminal investigation into the allegations. The local prosecutor declined to charge Nassar in that case.

Simon began her career at Michigan State after earning her doctorate there four-plus decades ago. The school is being sued by dozens of women, who say officials wrote off complaints about the doctor who worked at both the school and USA Gymnastics, which trains athletes aspiring to be Olympians.

The university's board of trustees voiced support of Simon last week only to have one trustee, Mitch Lyons, issue a statement the next day saying she should resign. On Wednesday, a second trustee, Dianne Byrum, and U.S. Sens. Debbie Stabenow and Gary Peters joined the chorus calling for Simon to step down.

Hours after Nassar's sentencing, the state House overwhelmingly approved a nonbinding resolution that called on Simon to resign or be fired by the university's board of trustees. It said legislators have "lost confidence" in Simon's ability to lead a transparent investigation, to implement changes, to protect students and to lead the university.

"I had an exchange recently with President Simon that persuaded me to know my voice and the concerns of others are not being heard," Carter said. "I could no longer be part of an administration that was not in full grasp of the damage that has been done to the girls and women and to the institution itself."

Michigan State officials have denied accusations the school covered up misconduct by school administrators. The university says reviews by campus police, the FBI and the U.S. attorney's office have not resulted in criminal charges against anyone at the university other than Nassar, who was fired in September 2016. Schuette in December urged the school to give him an internal report but the school has said there isn't one.

Simon declined a $150,000 raise in December, and she and the board agreed to put the money in a scholarship fund and create a $10 million fund for mental health services for sexual assault survivors. She earned about $860,000 in 2015, according to the latest data released by The Chronicle of Higher Education, making her the 12th-highest paid public university executive in the U.S. that year.

Simon has apologized numerous times to Nassar's victims, including in the first paragraph of her resignation letter.

"To the survivors, I can never say enough that I am so sorry that a trusted, renowned physician was really such an evil, evil person who inflicted such harm under the guise of medical treatment," Simon said.