SAN FRANCISCO, Calif. - Mike Bloomberg made his first campaign trip to California, including a stop in San Francisco.

The billionaire and former New York mayor took the stage with former California Governor Jerry Brown at the American Geophysical Union meeting to speak about efforts to combat climate change.

"Make sure the rest of the world knows America is continuing its progress even with a climate denier in the White House, this administration has its head in the sand," he said.

Brown has not endorsed a candidate in the 2020 election.

Bloomberg started his day in Stockton, accepting the endorsement of the city's Mayor Michael Tubbs.

“We have a candidate here with the record, the resources and relationships not to just beat Donald Trump, that’s the floor, not the ceiling," said Tubbs. 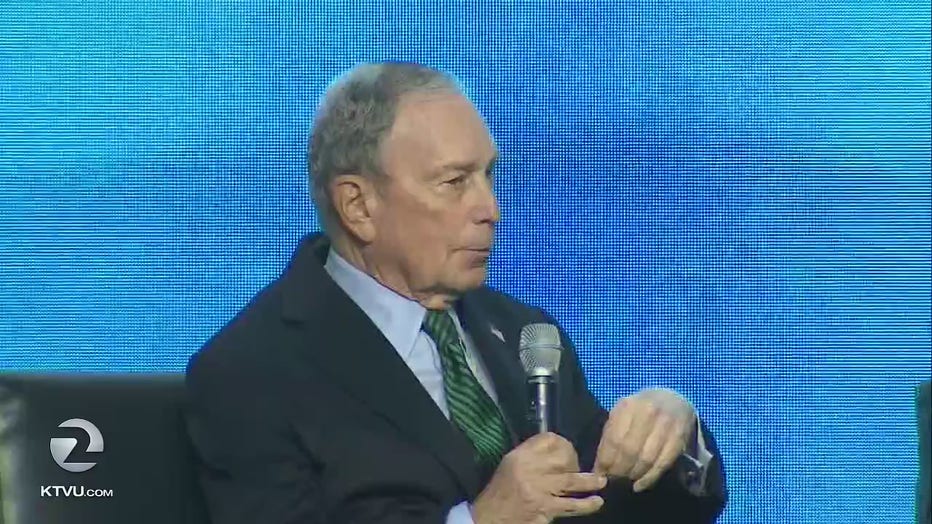 During the visit, Bloomberg outlined economic proposals based on his work in New York including building more affordable housing, grants to tackle homelessness, expanding the earned income tax credit and raising the national minimum wage.

“This is America," said Bloomberg. "We value hard work. We’re also a compassionate country and we make sure those that try to do the right thing if they need a hand up, let’s give it to them.”

Bloomberg's been under fire for his support of New York City's controversial "Stop and Frisk" police program when he was mayor.

Ahead of announcing his run, he said he was wrong and apologized, speaking about it again in Stockton.

“We then cut 95 percent of it before I left, I said 'look I made a mistake' and apologized for it," said Bloomberg.

This is the second pick-up this week for Bloomberg from a mayor who supported Senator Kamala Harris before she suspended her campaign.

Other Democratic candidates were critical of Bloomberg's late entry into the race and his spending. He's committed to shelling out $100 million by the end of the year, more than the leading candidates combined.

Despite the spending, a new Monmouth University poll shows him at about 5 percent with Democratic voters nationally.

Bloomberg has made it clear, he's not focused on the first four primary states, he's putting his energy into Super Tuesday, including delegate-heavy California.

Bloomberg has some work to do. A recent UC Berkeley poll shows Bloomberg is the first choice for only about 2 percent of California democrats.