One third of the nation's public pools face closures this summer amid lifeguard shortages, and the Golden State is no exception.

WALNUT CREEK, Calif. - You may not be in the pool this summer. A lifeguard shortage has created an exceedingly difficult summertime situation for private and public community swimming pools all over the nation.

One third of the nation's public pools face closures this summer amid lifeguard shortages, and those in the Golden State is no exception.

The American Lifeguard Association says that major lifeguard trainers such as itself, the Red Cross and the YMCA normally trained 300,000 lifeguards a year at local swimming pools.

But most U.S. swimming pools were closed for almost two years due to the pandemic. Almost no lifeguard training went on during this time, and it left little or no work available for mostly younger folks. In turn, many former pool lifeguards moved to new pursuits.

Making it worse, the Trump administration paused the popular J-1 visa that permitted foreigners to take temporary summer jobs. Though now reinstated, the consequences are long-lasting.

One third of the nation's public pools face closures this summer amid lifeguard shortages, and the Golden State is no exception.

"We were having to close our outdoor pools for a time because we simply didn't have the lifeguards to man it," said Ann Peterson, a spokesperson for Walnut Creek's senior Rossmoor community.

Rossmoor is short of well-trained seasonal lifeguards for its three pools.

"The lifeguards here oftentimes will be pressed into duty and will be asked to have water rescue situations or other situations," Peterson said. "It could be the pool deck, it could be locker room."

Rossmoor's Board worked out a compromise to serve the residents' desires to keep the two outdoor pools open. 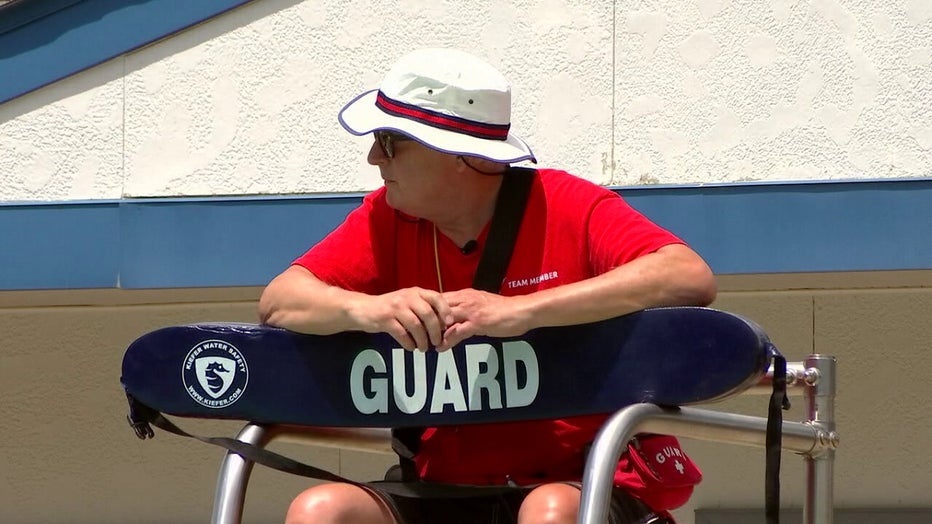 Michael Shields on guard at the YMCA

Though there is a shortage of beach lifeguards, the United States Lifesaving Association says it is not as severe.

"During the pandemic years with beaches, most of them were open and operating, if not at full staff, maybe a limited staff," said Tom Gill of the United States Lifesaving Association. The City of Santa Clara, reportedly short 40 lifeguards, declined to comment.

While the pandemic closed or restricted some beaches, the open, wide and outside environment left most lifeguard jobs and training active.

"That doesn't mean that the beaches are perfectly full with staffing. I mean, there's no industry, whether it be season or year round, that is not struggling to find enough people," Gill said.