ORLANDO, Fla. - The NBA provided a first look Tuesday at the court setup fans will see when play resumes later this month, including a socially distanced player “bench” area and a “Black Lives Matter” decal along the sideline.

The court inside the NBA’s “bubble” environment at Walt Disney World resort in Orlando, Florida, features adjustments to lower health risks for players during the coronavirus pandemic. Rather than a traditional bench area, players and coaches will sit in chairs 6 feet apart near the court, ESPN reported.

The phrase “Black Lives Matter” will be displayed in large lettering on the court. The NBA pledged to support social justice causes during the restart after several players expressed concern that the games would distract from more important issues. 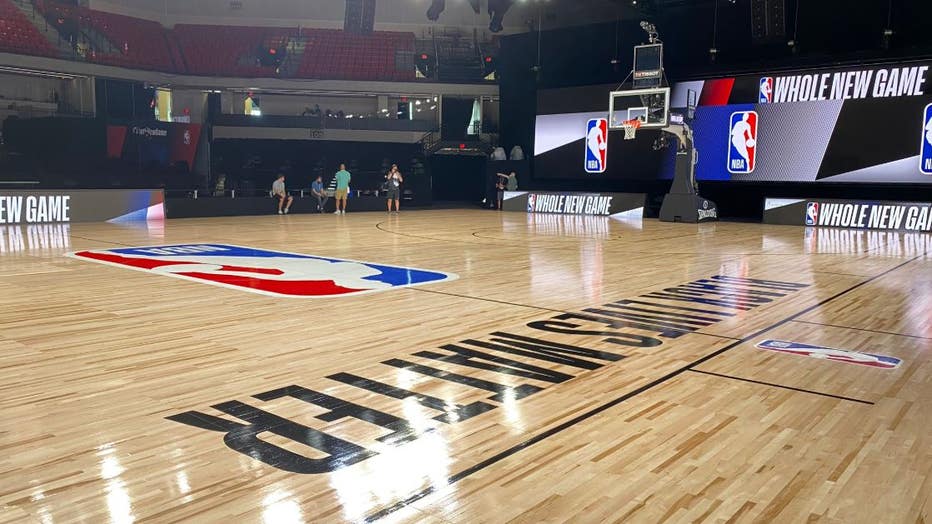 The NBA will resume without fans in attendance on July 28, 2020. The league unveiled the court setup at Walt Disney World resort in Orlando, Florida. (Photo credit: Twitter / @malika_andrews)

Broadcasters will call games during the restart inside a Plexiglas partition. Video screens surrounding the court displayed the message “Whole New Game” and will be used to help recreate a traditional arena environment during play.

The NBA suspended its 2019-20 season in mid-March after the worsening pandemic made it impossible to safely hold games. Play will resume without fans in attendance on July 28.

A total of 22 NBA teams are participating in the restart. The NBA has enacted strict public health guidelines, including frequent testing, social distancing and wearable technology.