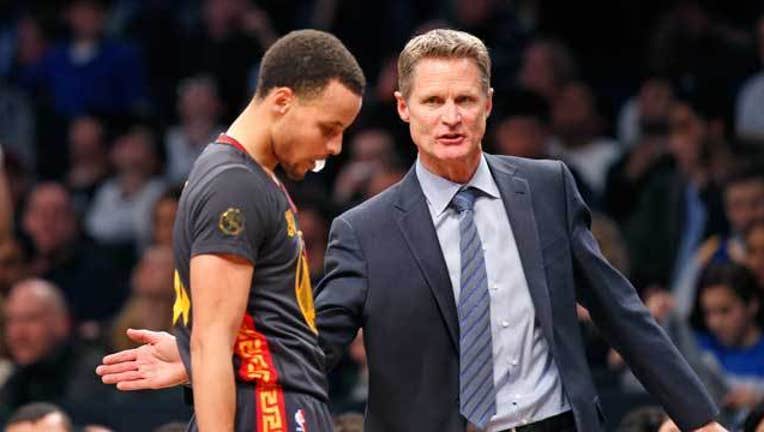 Curry brought the Warriors back from 10 points down with under 4 minutes left to tie it, but couldn't get a final shot off after Jack's jumper.

Curry finished with 26 points, 18 in the final period. Jack, however, calmly ran the clock down and shot over him as the Nets won their first game at home since Feb. 6.

Brook Lopez had 26 points and Deron Williams 22 for the Nets.

Andrew Bogut scored 16 for Golden State, but Klay Thompson shot 3 for 17. He was 1 of 9 on 3-pointers and finished with seven points.

Alan Anderson scored 16 for the Nets, who had played eight in a row on the road since beating New York at Barclays Center on Feb. 6, a 24-day stretch between home games that ranked as the longest in franchise history.

Now the Warriors can't wait to get home, ending their six-game trip and a stretch of 10 road games out of 11.

A night after overcoming a 26-point deficit to beat Boston, the Warriors looked as though they longed for their own beds for most of this one. Curry was only 1 of 6 for five points by the final minute of the third, but his 3-pointer with 11 seconds left in the period set him up for his big fourth.

On the same floor where he won last month's 3-point contest at All-Star weekend, Curry made four 3s in the fourth. But the Warriors tried to get the ball to him going toward the rim on an inbounds after Jack's basket, and he couldn't get a shot up before the buzzer.

Williams' basket made it 106-96 with 4 minutes left and the Warriors looked about finished. Curry then made a 3, and after Jack's jumper, Curry nailed two in a row from behind the arc to cut it to 108-105. He missed another that would have tied it — drawing a stunned response around the arena — but tied it at 108 on a jumper with 1:09 to play.

Andrew Bogut threw the ball away trying to get it to Curry, giving possession to the Nets. That set up the jumper by Jack, who also hit one here to beat the Clippers on Feb. 2.

Thaddeus Young, playing his first home game for the Nets since being acquired for Kevin Garnett at the trade deadline, scored 14 points.