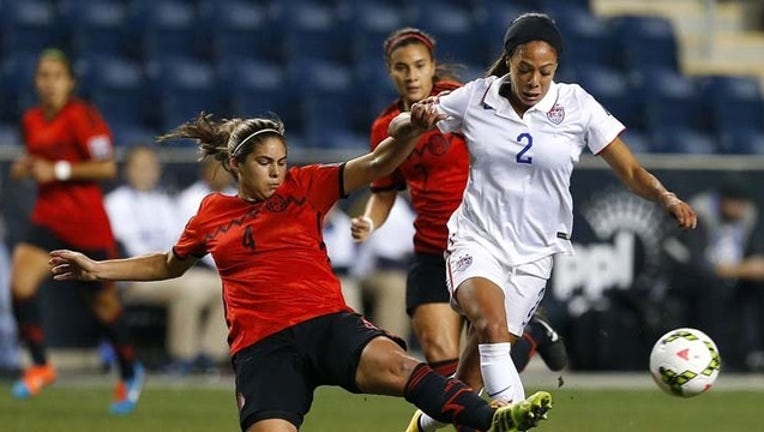 WINNIPEG, Manitoba (AP) — U.S. forward Sydney Leroux, a native of British Columbia, has no idea what the reception will be when she steps onto the field for the World Cup in Canada.

Any Canadian fans who think Leroux betrayed her roots, be warned.

"I feel like the worst you can do is boo me and try to make me feel bad," she said with a wry grin. "Because that just makes me hungrier."

Leroux and her U.S. teammates open soccer's premier tournament on Monday with a group-stage match against Australia in Winnipeg, Manitoba. The World Cup is being played across six Canadian cities over the course of the next month, concluding with the final on July 5 in Vancouver.

The United States, ranked second in the world, is among a tough group that includes the Matildas, as the 10th-ranked Australians are known, Sweden and former U.S. coach Pia Sundhage, and perennial African champion Nigeria.

Leroux is part of a dangerous pool of forwards on the U.S. team. Led by Alex Morgan and Abby Wambach, the group also includes Christen Press and Amy Rodriguez.

"It's probably the deepest team in the world," Leroux said. "There's going to be games where you're not going to start, it's all going to be up to what the game asks for. We're all ready for that, and we all know what we need to do."

At 15, and holding dual citizenship, Leroux decided to move to Arizona — alone — in hopes of grabbing the attention of the U.S. Soccer. It worked. The UCLA alum was a promising U20 player for the United States before joining the senior team in 2011. She had a breakout the next year, scoring 14 goals as a sub.

Known for her speed, Leroux is lethal on the fast break, as evidenced by her two goals — the first coming at a seemingly impossible angle — in an exhibition last month against Mexico in Carson, California.

But earlier this year, Leroux struggled with a right foot injury that happened in training. She missed a pair of European exhibitions, a 2-0 loss to France in Lorient and a victory over England in Milton Keynes. The injury dogged her for 3 ½ months.

As part of her recovery, she worked out against her husband, Dom Dwyer, who plays for Major League Soccer's Sporting Kansas City. The couple married on Valentine's Day.

The workouts helped her speed.

"The injury in January really kind of sucked. I was out for a while, and then getting back to being game fit is tough," she said. "But I worked really hard when we were out of camp. And I'm feeling really good right now."

U.S. coach Jill Ellis said it was clear Leroux was focused when she returned.

"She's back to full fitness, she's back to full health, playing very well," Ellis said. "There's a calmness about her. You know, Syd is a very emotional, intense player. But she has a kind of calmness in what she's doing, even in her finishing."

Leroux says, sure, she'd like to start, but mostly she's ambivalent when it comes to her role in the World Cup: The team comes first.

"I wouldn't mind coming off the bench and ending the game as well. So it doesn't matter," she said. "As long as I'm putting my team in the best position to win, it doesn't really matter if I'm starting or finishing."

There's a bit of history when it comes to the reception Leroux can expect in Canada. She was booed back in 2012 at an Olympic qualifying match in Vancouver, and again during a 2013 match against Canada in Toronto. Leroux scored in stoppage time in that game and then pointed to the U.S. crest on her jersey.

Perhaps the good news for Leroux is that the United States plays in a different group than No. 8 Canada, which means the teams won't meet early on.

"The stronger the wind against her, the more Syd rises, I think," Ellis said. "She has a family, above all, a support group that will protect her. She is very, very strong. She knew what she signed up for when she left the Canadians. But she's so integrated into us, I don't think it's really entered her mind of 50,000 people booing her, maybe. Again, I think that just helps Syd, even more, get her edge."

Leroux herself is approaching it with that same calm she's displayed to her coach.

"I'm planning for everything," she said. "Negative, positive, who knows?"